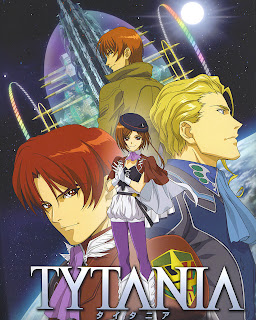 Tytania is a space opera. It's about a galaxy-spanning empire run by a single family, the Tytania. The five people actually running the empire are the Clan Lord and the four Dukes. The various star-systems which make up the empire have a certain amount of autonomy until they happen to have something the Tytania want, or unless they happen to run afoul of the Tytania. If either of those two things happen, the Tytania slap them down hard and take over the planet/star-system.

Naturally, given human nature in a dictatorship, there are many, small, poorly organized rebel groups arrayed against the empire, which have less affect on the Tytania than your average mosquito in a hurricane.

Enter Fan Hyulick, who is hired by a planetary system to fight the Tytania when they come calling. Hyulick actually succeeds in beating one of the four Dukes in a battle. The bad news is, that wasn't the intent of the planet government. They were simply wanting to have enough military presence to have some bargaining power. They immediately fire Hyulick, but to late to escape the wrath of Tytania.

Hyulick in the meantime becomes the focus of everyone in the universe. The Tytania alternately want him dead or tortured forever. The rebel groups wish to cash in on his victory and use him to further their causes. Most of the series is Hyulick's and Tytania's maneuverings around each other.

The series wasn't that bad. I always enjoy series with lots of good-looking characters and it kept me interested enough to watch the whole thing but there were some things I wasn't that fond of in it. For me, the major flaw was that the plot moved too slowly. In fact it almost didn't move at all. A lot of time was spent on the foibles, personalities and interactions between the four Dukes and various factions within the extended Tytania family. And Hyulick spent more time accidentally stumbling from one action to the next than he did purposely achieving anything. Plot-wise, the series was disappointing.

Another thing I didn't like was the "token" character death of Lira, Hyulick's love interest.

I should probably explain my different classification of character deaths. I know what you're thinking .... dead is dead. *laughing* That's not necessarily true in anime, but that's beside the point. Character death can be more or less tragic, more or less satisfying, more or less emotional, depending on the 'class' of death it is. The worst possible death a character can suffer is the "senseless death". I'm using 'senseless' here to mean there was no possible reason to make it necessary to kill off that particular character, and usually the death is accidental. The series makers do it either just to have a character death or to 'tidy' things up from their perspective. I've already mentioned the example of Solomon in Blood+. Other examples include Dio in Last Exile, Michel in Macross Frontier and Third in Jyu Oh Sei. Toboe in Wolf's Rain can be considered a senseless death.

Slightly better than the senseless death is the "token death". Usually I consider it a "token death" if no one else in the series dies, but occasionally other minor characters die and the token death is the only death of a major character. Token deaths may or may not be senseless. Michel in Macross Frontier is both token and senseless. Maes Hughes is a token death, but he died for a reason and it wasn't an accident. Yamazaki's sister in PeaceMaker Kurogane is a good example of a token death. She's the only main character to die in the series (if you don't count the chief bad guy), and her death was borderline senseless. In Tytania, Lira is killed about half way through the series. Her death is not really a token death in that Hyulick does manage to kill one of the four Dukes as well as the minor Tytanaian lord who kills Lira. Her death just feels like a token death to me. They could have stiffened Hyulick's resolve without killing Lira.

Another class of death I hate is the "balance the karma" type death. The person has to die in the end to make sure all the karma is balanced out. I personally could care less about the karma. I want my characters to survive. Alex Rowe in Last Exile is a good example of this type of death. Jomy and Keith's deaths in Terra e seem to fit in this category.

Another class of death that's pretty common is the self-sacrificing death. These are always tear-jerkers, but they're more acceptable than other types because the death is usually for a good solid reason, and often someone else is saved. They are also usually far and away the most emotional character deaths. Keisei in Shikabane Hime is both a token death and a self-sacrificing death. Nuriko in Fushigi Yuugi would be the stereotypical death of this type.Series that decimate their cast with multiple character deaths are also fairly common. X is this type of series. Casshern Sins also, and Chevalier D'Eon, Chrno Crusade, Fafner, Wolf's Rain, Samurai Seven, it's a pretty long list. Gilgamesh offed the entire cast.

I'm frequently amazed when I think about how far I've come from when I started watching anime. Like all Americans raised on Saturday morning cartoons, I never expected to be faced with character death. In fact, death is probably the major defining difference between "cartoons" and anime. My first experience with it was Nuriko's death in Fushigi Yuugi. I was so totally in shock. I could not believe that they had killed a major character, and in such a heart-wrenching way. I almost quit watching anime. Now I'm usually amazed if all the characters manage to survive the series, and believe me, those series are pretty uncommon. Get Backers pretty much did it, and with a sizable cast. Scrapped Princess and Heroic Age both did it, despite indications to the contrary. And of course series like Card Captor Sakura and Azumanga Daioh, generally everyday-school-life series don't kill off characters. Part of what makes or breaks that ending I'm always talking about is the number of characters that survive the series.

Oh! And about Tytania, I really didn't like the Opening song, although the Ending song was great.
Posted by dai-ET at 3:43 PM