I haven't posted in a while, so I thought I'd talk today about common themes. There are a number of common themes to anime plot lines, and a lot of series fall into those common categories. That means a lot of anime have similar plot lines. In fact a unique plot line is the exception rather than the rule, and I keep an eye out for those anime.

One plot element that is very, very common is the female high

school or middle school student who is transported to another time or world. What she does there varies between series. Sometimes she ends up as the last hope to save the civilized world, either the world she's been transported to, her original world or both. If she's not in a savior role, then she at least has some quest to accomplish. In the case of Inuyasha, the quest involved gathering the million fragments of a shattered round, magic-filled jewel in order to keep demons and humans from using it for bad purposes. Other examples of this type of anime are numerous and include such series as: Fushigi Yuugi, Juuni Kokki, Harukanaru Toki no Naka de, and Escaflowne. Occasionally it's a male student who's transported to an alternate reality and is required to accomplish something. Kyou Kara Maou and KIBA are examples of that.
Another common plot device is the harem-type anime, where one guy is surrounded by several 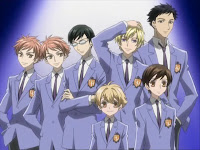 girls, all vying for his interest or favor or attention. Some hard-core examples of this type of anime include Shuffle, Maburaho and Rental Magica. "Hard-core" in the sense that everything and everyone revolves around the central male character. Much more subtle examples of harem-type anime include, surprisingly, ToAru Majutsu no Index and Toradora. ToAru and Toradora did a good job of hiding the fact that they were harem-anime by not focusing on the actions of the central male character to the extent that the story suffers. Nonetheless, basically Touma and Ryuuji respectively were surrounded by multiple girls who were interested in them. Reverse-harems are almost equally as common as regular harem-types. In reverse-harems obviously, the central female character is surrounded by multiple, usually very gorgeous males. Examples include Harukanaru, Ouran High School Host Club, Fushigi Yuugi, Pretear and Saiunkoku.
I've already talked about shinigami in regards to Bleach, but shinigami-containing series are also a common plot device. The series may be based around shinigami like Bleach is, or simply happen to have shinigami in them. Shinigami-related series include: Bleach, Yami no Matsuei, FullMoon wo Sagashite, Death Note and Kuroshitsuji.
Vampires are also an extremely common theme in anime series. Vampire series include: Black 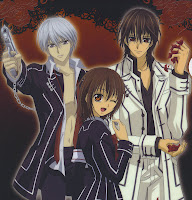 Blood Brothers, Blood+, Karin, Kurozuka, Nightwalker, Trinity Blood, Shingetsutan Tsukihime, Tsukuyomi: Moon Phase, Vampire Knight, Vampire Knight Guilty and Vampire Princess Miyu. Vampire series are probably among my favorite series, but that's because I've always been a little fascinated by vampire legends. Interestingly, in essentially all these series, the vampire(s) is the good guy. Well, perhaps not in Kurozuka, and Blood+ and the Vampire Knight series have both good vampires and bad vampires.

Sci Fi (science fiction) themes are common and probably more than half the time sci fi series are mecha series. Stellvia, Eureka Seven, The Third, Soukou no Strain, Soukyuu no Fafner and

Sousei no Aquarion are all mecha sci fi, along with Macross, Gundam and Eva. There are also a fair number of sci fi series out there that are not mecha series, including Toward the Terra, Avenger, Jyu Oh Sei and Kurau. In general I like the non-mecha better.
Magic is another common thread in anime. And it's easier to list series that do not have magic in them than to list the extensive group that include some form of magic. Magic is extremely common and often makes me wish I had just a fraction of those abilities or powers. ToAru Majutsu no Index is a unique series in that it actually separates extrasensory perception (esp) "skills" from magic, claiming that esp is 'science' and magic is, well, 'magic'. People with esp skills of any sort cannot perform magic. Interesting concept.
Because there are so many similar plots in anime series, it's fun to find ones that are really different. Other "interesting concepts" that I've enjoyed along the way include: 1) Death Note: I hated L's death, but it's the first series I've ever scene where the main character is the bad guy in the series. 2) Moyashimon: a series about micro-organisms. Really. Absolutely unique. 3)Toushokan Sensou: Libraries have their own armies. Okaaaaay. Totally hard to swallow but a great love story and very fun to watch.
These are just a few examples of some of the series that fall into these categories, and I'm always on the lookout for new categories.
Posted by dai-ET at 5:06 PM