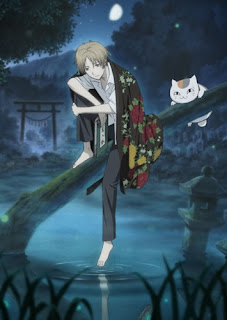 finished watching the second season of Natsume Yuujinchou. Really nice series. No, really visually gorgeous series. Lots of pretty characters. It's what I would call a 'feel good' series. Nobody dies, very few cliff-hanger episodes, fun to watch. The premise is a boy who can see and interact with youkai (ayakashi, demons, ghosts, non-human entities). He inherits a "Book of Friends" from his grandmother which contains the name of every youkai she has defeated over her lifetime. Natsume sets about returning their names to the youkai. His sidekick and self-proclaimed bodyguard is Madara, a powerful youkai who mostly takes the shape of a fat cat and who Natsume calls Nyanko-sensei. The interactions between Natsume and Nyanko-sensei are priceless. Some of the best scenes in the series take place between the two of them.

This is not a fast-paced, action-filled series. Neither is it a boring, snail-paced series. It's fun and occasionally bittersweet and always beautiful. It has a background plot of Natsume learning to trust and interact with the people around him, and it's filled with interesting characters. My biggest regret is that both seasons were only 13 episodes. I would have been happy if it had gone on much longer. I enjoyed watching it and will no doubt buy the DVD when it comes out.

Along with being an anime addict, I'm also a collector. I like to collect things and I have a pretty massive anime DVD collection. I like to watch series over and over. Most of the DVDs I have are region 1, produced by companies here in the States. And yes, sometimes the American companies butcher the titles and the subtitling job. A good example is Blood+. Who the hell is doing the translation on that one? Someone who speaks Greek? Since when did "Okaeri, Saya-neesan" translate as "hey, how'd you catch that?" And it goes on like that. *shakes head* It's by far the worst job I've seen, and I have a lot of DVDs. Luckily, if it gets too bad, I can just turn off the subtitles and listen to it. So why not get region 2 and just listen to them all? My Japanese isn't that good. Just good enough to know when they're totally screwing up. Buying the DVDs makes me feel marginally less guilty about downloading anime.

Sometimes the American version screws the title up so much that I don't immediately realize what series it is. For example, Harukanaru Toki no Naka de came out over here as: Haruka: Beyond the Stream of Time, Soukou no Strain came out as: STR.A.IN - Strategic Armored Infantry, Weiss Kreuz was released here as Knight Hunters. On the other hand, sometimes they do it right. Jyu Oh Sei was released as Jyu Oh Sei, not Planet of the Beast King or some other translation. Those examples are harder to find. When the original title is not in English, it's a little scary what they come up with. Maybe that's why so many anime series have English titles.