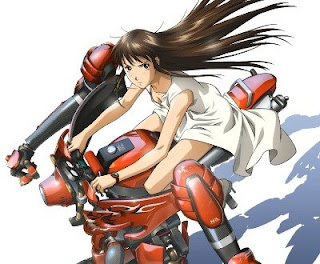 RideBack is a short series (12 eps) that I just finished watching. The story centers around Ogata Rin, a prima ballerina who injures herself and stops dancing. She comes across a club in the college she begins to attend where the members ride "ridebacks", which can best be described as mutant motorcycles. Rin discovers she has a talent for riding them, especially a red one called Fuego. In the course of the 12 eps Rin gets caught up in politics and involved with anti-government terrorists.

Two things I didn't like about the series: there was a token death, and I think I've made myself pretty clear on how I feel about token deaths. Why kill a character just to have a character death in the series? The series wouldn't have suffered if Suzuki had survived it. Secondly, there were a couple episodes filled with teenage angst, it's-all-my-fault. When the series is only 12 eps, don't waste them on angst, is my feeling.

Overall though, I liked the series. On my rating system, it's a maybe-buy-on-DVD (if it's ever licensed). The plot is decent, but what makes the series is the music and the 'ballet' movements Rin achieves with Fuego. The ending theme song (ED) is a great piece of music and the scenes with Rin 'dancing' on Fuego are awesome.

RideBack is a mecha series, but a mecha series done right. Which means the creators don't sacrifice characters or plot for the sake of showing off their mecha creations. There are tons of mecha series out there and I tend to avoid most of them. Examples include all the Gundam and Macross series, and of course the classic Neon Genesis Evangelion. All too often, the series creators are so busy showing off the mechanicals, that everything else tends to fall by the wayside or is just an afterthought. Reideen is a good example of that. I would say that a good quarter of every episode was devoted to watching Reideen's transformations and movements. The most recent Macross, Macross F, and Eureka Seven are good examples of mecha series done right. And of course, the music in Macross F is beyond awesome. Yoko Kanno of course. Her music is always spectacular.

Mecha series tend to have a couple of themes in common besides the showing off of the mechanical creation. One is that almost without fail a young, more or less clueless person has a true talent or skill at operating the most sophisticated and newest mecha-du-jour. So that person gets roped into whatever organization the mecha belongs to, and tends to become the last hope of civilization against some threat. Another common theme is a mid-series loss of ability or desire to pilot the mecha, followed by serious angst. This theme may or may not be present, but it's pretty common.

Besides the ending, things that make me decide whether I like a series or not, include PLOT and music. I like good looking characters too, but it's not an essential. I really liked Samurai Champloo, and I can't believe anyone would call those characters pretty. Of course beautiful series are easier to watch, but if there's no plot to speak of you get tired of watching them pose after awhile. And the back ground music (BGM) can really help or hurt a series. I guess I basically look at the overall package, which is why I can't tell until I've seen the end.