Yoko Kanno is far and away my favorite composer of anime music.

I have a lot of composers that I like, but she tops the list. Her range of musical creations is just so amazingly broad! Cowboy Bebop was one of the first series I ever watched and she did the music for that series. She also did the music for Wolf's Rain, Escaflowne, Macross Frontier, Macross Plus, Sosei no Aquarion, Ghost in the Shell SAC, Turn a Gundam, Please Save my Earth and Darker Than Black. She also composed opening (OP) and/or ending (ED) theme songs for Record of the Lodoss War, Gasaraki and Cardcaptor Sakura. If you've ever seen any of those series, you can see what a wide range of music types she composes. I'm always amazed by the different sound of her pieces and her ability to change the feel of the anime by her music. She's just pretty awesome.

Another composer I really like is Kenji Kawai. He did the music for Seirei no Moribito (two of my favorite soundtracks), as well as for Sky Crawlers, and at least one soundtrack worth of music for Gundam 00, Higurashi no Naka Koro ni Kai and Otogizoushi. Recently he's done the music for Higashi no Eden.

I'm also especially fond of Joe Hisaishi's music, especially when it accompanies a Miyazaki Hayao flim. Nausicaa of the Valley of the Wind, Mononoke Hime, Spirited Away, Howl's Moving Castle, My Neighbor Totoro and Ponyo on the Cliff by the Sea were all composed by Hisaishi. His music often has an almost religious feel. I especially like to play it when I'm driving through Utah and Colorado. It just seems to fit. 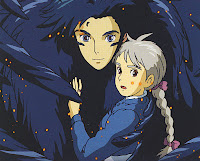 Beside favorite composers, I have certain soundtracks that I really like and play over and over and over and over. The Seirei no Moribito OSTs (original soundtracks) fall into this group, as do the two Blood+ OSTs, Jyu Oh Sei OST, Loveless OST, Macross Frontier OSTs, Mushishi OSTs, Bakumatsu Kikansetsu OSTs. Quite a lot of them really, but I love series soundtracks. My biggest difficulty is to decide what music to play, because I like them all. I actually end up rotating them so that I play all of them on a fairly even basis. When one of my favorites comes up though, it tends to get played more than once .... or twice.
I have way too much anime OST music to list it all here, or even list more than just my top favorites. I also like the Tsubasa OSTs, the Death Note OSTs, the X OSTs and Code Geass. Noir and Noein OSTs are great. See? Once I get started it's hard to limit the list. Probably I've even left out a favorite along the way.