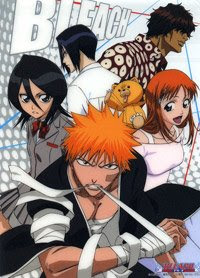 A while back I found myself trying to explain the plot of Bleach to someone who had never heard of anime before, let alone shinigami. It was an interesting exercise, compounded by the fact that the person was trying not to stare at me as if I had lost my mind. So this blog will be a synopsis of the plot of Bleach, just in case anyone reading this hasn't seen the series.

To start out, Bleach is about shinigami .... a whole society of shinigami. You can't watch anime for long without running across shinigami unless you only watch mecha series. Shinigami are also known as Soul Reapers. They are non-human, supernatural beings who collect people's souls. Depending on the series, they collect the soul either before the person dies (thus causing the death), immediately after the person dies, or at some time after they die. In Bleach, the shinigami not only help the dead person's soul "pass on" to a community called Soul Society, they also protect the souls from souls that have gone bad, called Hollows.
Bleach's story line is centered around an orange-haired high school kid named Kurosaki Ichigo who can see, hear, touch and just generally commune with ghosts (and shinigami), and a small female shinigami named Kuchiki Rukia (wearing the grey school uniform in this picture). Shortly after the two meet, Rukia is injured protecting Ichigo and his family. In order to save everyone she attempts to transfer some of her shinigami powers to Ichigo. Ichigo takes them all and then must act as a shinigami in her place while she recovers. The catch to this plan is that giving a human your powers is a felony in the Soul Society. Other Shinigami come and retrieve Rukia to the Soul Society, and Ichigo is left for dead when he tries to stop them. Rukia is sentenced to be executed for her crime.
Ichigo is helped by a "shop-keeper" named Urahara who supplies goods for the shinigami in the real world. Urahara and his 'employees' get Ichigo back on his feet and teach him to fight. Then Ichigo and his three friends, Inoue Orihime (orange-haired girl), Ishida Uryuu (guy in white) and Yasutora Sado (also known as Chado, tan guy in pic), and Urahara's friend Yoruichi (who wears the form of a cat) enter Soul Society in order to save Rukia. This first arc covers the first 65 or so episodes and is very well done. The Soul Society has it's own pecking order, and most of the action centers around the doings of the 13 Protection Squads and Ichigo-tachi battling their way past these guys. These 13 squads are led by Captains and Vice-Captains, and Bleach manages to balance a huge cast of characters, most of whom have distinct personalities. The cast in Soul Society includes the 13 captains and vice-captains, various other shinigami and various non-shinigami characters.
So this is the plot line until the mid-60s episodes. Then you discover that the execution of Rukia is a small part of a much, much larger plot which is the main story line of the series. This larger plot started back over 100 years previously, and it's the larger plot that is interrupted by filler arcs when the series moves too fast.
The captain of the fifth squad is a shinigami named Aizen Sousuke. Aizen intends to be the supreme ruler of all existence, and it is his complex and convoluted plan which splits the shinigami in Soul Society and turns the society pretty much on its head. Aizen manages to stay multiple steps ahead of everyone in his plotting and maneuvering and that still seems to be the case out to 213 episodes now. When their plotting is uncovered, Aizen and his two traitor captains flee to Hueca Mundo (the world where the Hollows live) and Aizen starts creating a Hollow Army, led by 10 Espada (Hollow with greater than captain-level spiritual power) and multiple Arrancar (also Hollow heavies). Aizen's ultimate intent is to destroy Ichigo's home city in order to get the power necessary to create a key to get to the King of Soul Society to destroy him and become the supreme evil overlord of all creation. <--- my words. In the process of accomplishing this, Aizen-tachi kidnap Orihime and Ichigo-tachi follow him into Hueca Mundo. Four shinigami captains also follow them there. Ichigo-tachi and the 4 captains are then trapped there by Aizen who departs to the real world to destroy the town.
At this point the plot diverges to 100 years ago to show everyone the start of Aizen's plotting, and the reasons behind Urahara's real world existence and the existence of another group (called the Visored) who are about to show up on the good guys' side. It's at this juncture that we get another filler arc. And not just any filler arc, a Don Kannonji filler arc (my LEAST favorite character).
So there you briefly have 212 episodes of Bleach plot. I couldn't really do the plot justice in this amount of time, including all the character interconnections and various battles and interactions. For example, the shinigami captain who arrests Rukia is her brother Kuchiki Byakuya. Or Aizen murders his Vice-captain who adores him. Well she actually ends up living but isn't really sane after that betrayal. But anyone who wants the details should really watch the series. One of these days maybe I'll figure out the eps that are filler arcs and post it here so anyone can just watch main plot line story.
Posted by dai-ET at 3:18 PM