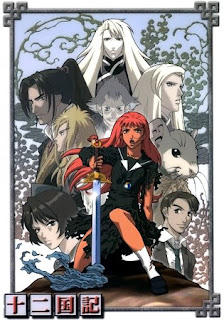 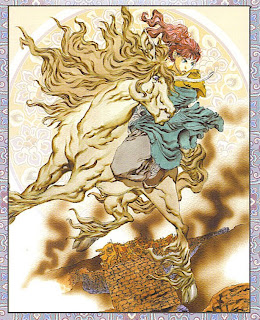 Since I'm moving the Juuni Kokki picture, (can't have the blog get boring) I decided to talk about Juuni Kokki. The series is one of my favorites, and is both a great series and an incredibly frustrating series. I'll come back to that.

This series starts out with one of the stereotypical themes: high school girl gets transported to alternate universe where she must grow up and accomplish a quest. So the basic premise is common, but the details are pretty cool. The main character is Nakajima Youko, the red-haired girl in both pics. The alternate world she's transported to is one where there are 12 kingdoms (thus the title) situated around a central island. This small picture shows the world map. 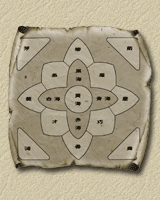 There are 4 island kingdoms out in the corners and 8 kingdoms ringing the central island with ocean in between. Each kingdom is ruled by either a King or Queen. One of the unique ideas in the series comes from the way those rulers are chosen. Each kingdom has a "Kirin". Kirin are holy creatures that can take human form but their normal form is an incredibly beautiful unicorn. In the two pictures at the top, the main kirin in the story, Keiki, is being ridden by Youko on the right and is at the top back on the left picture. The kirin choose the King or Queen for a country. Keiki is unable to find his country's ruler in his world so he comes to Japan and get her. Youko and Keiki get separated and she must make her own way and become Queen of Kei. That's the main story line, but the series is complex and follows multiple stories.

Another unique element in the series is the way babies are born. When a couple wants a child they weave a ribbon and tie it to a special tree. If their wish is granted, a child grows like a fruit on the tree at the point where their ribbon is tied. All creatures in the world are born from trees, and the kirin are born from a single special tree on the central island. That tree only bears fruit if a kirin dies so that there are never more than 12 kirin, one for each kingdom.

I believe that in the novels there is at least one story for each kingdom, but although the series may originally have had that intent, they stopped early. The kingdoms covered by stories include Kei, with Youko and Keiki and the kingdom of En, with En-Ou and Enki. The series starts the story of Tai and then ends before the story is finished. This is what I was talking about as incredibly frustrating. You never know what happens with Tai-Ou and Taiki.

Beyond that though, the series is very good. They manage to follow multiple story lines and connect people from various different parts of the world and keep a coherent plot. The tales that they finish are satisfying, not overly tragic or sickeningly sweet. I almost didn't watch it because in the first several episodes Youko is such a whiny crybaby it makes me crazy. Not one of my favorite character types. Obviously she grows up with the help of one of the characters I like best in the series, Rakushun. Rakushun is a half-beast. He's the mouse in the left picture. Half-beasts can take the form of their beast or of a human. They're born from the same trees as full humans but are discriminated against in some of the kingdoms. I like his character a lot. He's like a perfect friend, good-natured, kind, really smart but with a lot of common sense. And he expects people to be people. He doesn't expect people to be perfect.

Anyway, it's a good series and I recommend it.