I haven't had much time to blog lately and that's going to get worse over the summer between business trips and vacation, so I thought I'd better get a blog in while I can. I decided to talk about some of the series that started this last April. Usually I like to wait until a series is over to talk about it because, of course, the ending often makes or breaks the series for me. That's not always true. I've been talking about Bleach and it's obviously not over, but the shorter series (11 - 26 episodes) I usually wait. Today though I feel like talking about some of the series I'm currently enjoying that started in the April batch. April and October are the two months that a lot of new series start, so I always look forward to seeing what will be introduced.
So far in this group I have some favorites and at the top of that list is 07-Ghost. This series just happens to be another one that I've been collecting the manga for a while now without realizing that an anime series would be adapted from it. So since I found out, I've been eagerly waiting for the series. I'm seriously enjoying it so far. This story is about a boy named Tate (Teito) Klein. Teito has no memory of his past at the story start, and has been raised as a military cadet although he started out a slave. He runs afoul of a very bad military type named Ayanami, runs for his life and ends up claiming sanctuary at a church with three very interesting bishops. This is the point where the story currently is, about 8 episodes along. Teito's about to lose his best friend (Yup, looks like a token death *winces*). I don't know where the story will go from here but I suspect there will be interactions between Teito and the bishops and the military. Also, Ayanami is shaping up to be one of the really great bad guys.

Another series I'm enjoying is Higashi no Eden. This series has got a really unique plot, but keeps the watcher as clueless as the main character is. As he figures it out, we figure it out. He, Takizawa Akira, has had his memory erased, but figures out that he is one of 13 people who have been given 11 billion yen each and been told to use it to save the world in whatever way they can. If they run out of money, they will be killed. Short of that they can do anything they want, including murder. The only way out is to essentially save the world. Takizawa gets involved with Morimi Saki in the first episode and she involves him with others. Along with the unique plot, I like the character style and the music. Unfortunately this series is only 11 episodes, so I'll know pretty soon whether it's a really good series or not by how it ends.
I'm also enjoying a series called Shangri-La. I began watching this one

because the characters are done by Range Murata and I like his character style. The broad range of characters, a pretty unique plot and some good music have kept me watching. This is a post-apocalyptic type series following the life of a young pink-haired girl known as Hojo Kuniko. The world has placed a rigid cap on carbon emissions and the world economy is carbon-based. Jungles are taking over civilized areas in attempts to stop the carbon emissions and prevent the further rise of sea level. Besides Kuniko, other main characters include a trans-sexual named Momiko, a military junior officer, a child princess who kills anyone who lies to her by twisting them into crushed pretzels with her thoughts, a child computer genius who plays the world economy like a game, etc, etc. Basically it's an interesting story so far. 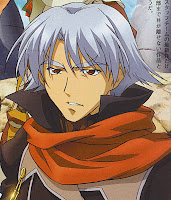 I'm also following a series called Tears to Tiara, mainly because of the white-haired character to the left. This is Arawn, the Demon King. The whole feel of this series is somewhat like Utawarerumono, but Arawn is surprisingly (refreshingly) good at maintaining a sense of the ridiculous and serves as a balance for the MANY foibles of the characters surrounding him. This series is adapted from a role-playing game, which generally is not my favorite type of series. Occasionally, I get irritated at the series when the idiots around Arawn are almost too much to take, but then I get over it. It certainly won't be the first series I've followed mainly for the sake of a single character, and he's pretty cool.
Pandora Hearts is another series I'm keeping up with. I really like the

three main characters in this series, Oz Bezarious, Raven (Gilbert) and Alice, whose other form is a frigging huge black rabbit with a scythe. Oz is condemned to Hell (the Abyss) for not-yet-explained reasons, meets Alice there and together they return. Except the agreement they made in order to be able to leave the Abyss is illegal in the real world, and they're forced to work for a wacko character in an organization known as Pandora. So far the characters and plot have kept me watching. I almost dropped this one after the first episode and now I'm glad I didn't.
Phantom: Requiem for the Phantom is another one from this batch that I keep watching. It has a little bit of the feeling of Noir about it, but that may just be because it's also about a pair of assassins. This pair is a lot more violent than Mireille and Kirika ever were and also have a lot less control over their own fate.

A group named Inferno is out to control the underground and all it's groups, including the Mafia. An Inferno wacko called the Scythe Master created these two assassins by erasing their memories and teaching them to be the perfect killers. He started with a girl he names Ein and who is referred to by Inferno as Phantom. The series starts with the creation of Zwei, the guy. He was a Japanese tourist in the wrong place at the wrong time who is made into the other half of Phantom after he almost wins against Ein, even without training. I keep waiting for Ein and Zwei to break free from Inferno, and the series to become more Noir-like as they go up against their former bosses. Or anyway that's what I hope happens. I'll have to wait and see where the series goes.
The last one from this new group that I haven't decided whether to drop yet is Valkyria Chronicles

and I'm not sure what keeps me coming back in this one. It has pretty characters, so maybe that's it. It's also developed from a role-playing game and is a war/military series. Two countries are at war, and the son (Welkin Gunther) of a famous general gets sucked into the militia, or actually follows a girl (Alicia Melchiott) into the Militia. He is really a gentle soul who doesn't belong in the military, but keeps coming out on top of situations because of his intelligence, and his half-sister (Isara) who is a mechanic who just happens to drive a modified tank. So far the story follows these three main character plus Welkin's best friend.
Anyway that's my synopsis of the April series that I'm currently keeping up with. It'll be interesting to see how many of them I end up deciding are really good series.
Posted by dai-ET at 7:36 AM