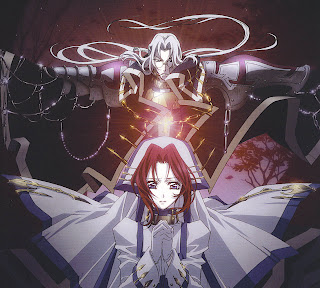 Trinity Blood is an anime series that I have a soft spot for. It's the first series that was made from a manga after I had already bought the manga. I didn't realize that an anime series was going to be developed from it when I started collecting the manga. I just liked the look of it. Add to that, it's a vampire series, and of course it will be one of my favorites. I would have to say that it's definitely a vampire series with a twist though. The third factor in it's favor is a pretty unique plot and world view. Just basically a likable series. Plus they don't kill off any of my favorite characters although they do throw in a token death.

Just to give a very brief story summary, the setting is post-apocalyptic. 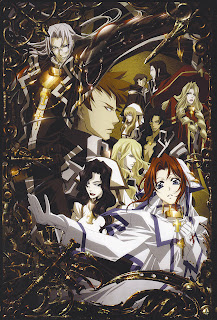 The population has destroyed itself in some manner and concomitant with that, or shortly afterward, the "vampires" appeared. They are probably originally extraterrestrial because our sun harms them, but the series doesn't spend any excess time going into this background. They don't refer to themselves as "vampires" of course, but are called that by the humans whom they prey upon and whom they mainly consider a distinctly lower life form. The two main Powers in

existence at the time of the story are the human-based Church (with a capital Ch), and the vampire's Empire. Certain factions within each group want reconciliation between the two, or want annihilation of the other group, depending on the faction. Also a third underground faction, the Rosenkreutz Order, wants the two groups to destroy each other so that the Order can create a new world.

The story follows the efforts of Abel Nightroad and Ester, a priest and a sister, to make 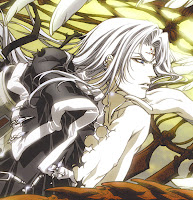 contact with the Empire and try to create a more lasting peace than the current simmering stalemate. Abel and Ester's comrades and their vampire counterparts in the Empire make up the cast, along with various members of the Order.

There are several interesting plot twists beyond this basic story, but this gets the gist of it. This is one of those series that has all the elements that make me put it on my great anime list. The characters, done by Nakajima Atsuko, are gorgeous. The music is outstanding, one of my favorite soundtracks. The series has a relatively unique plot, and to top it off, all my favorite characters survive the series. 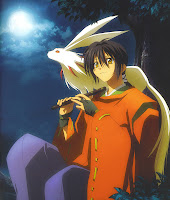 Atsuko, the character designer not only for Trinity Blood, but also for Princess, Princess and You're Under Arrest. I love artbooks. Not only are they really gorgeous, but you get some pictures of your favorite anime characters that it would be difficult to get any other way. Examples from the Nakajima artbook are the picture on the left above of Ester and the Count, and also the picture on the right above of Abel, which is part of a much larger picture.

I have more than a few artbooks from my favorite series. The difficulty with artbooks is that the pictures are in books. You have to get them out and 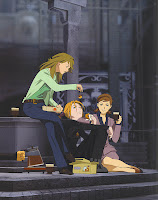 look at them occasionally. Or I have a tendency to scan my favorite

pictures and then use them for backgrounds on my computer, switching out relatively frequently. I've included some pictures from a few of my other artbooks in this post: pics from Shonen Onmyouji, Cowboy Bebop, Witchhunter Robin and Bakumatsu Kikansetsu Irohanihoheto. I'm always amused by the length of the title on that last series. Given my predilection for shortening names of series, I refer to it as "Baku". It's a historical anime, which is another type that I'm attracted to. I'm always curious about just how much or how little historical anime reflect Japan's actual history. There are persons from their history that appear over and over again in anime series. Of course, they have a lot of history. The Tokugawa Shoganate lasted longer than the US has been a country. Omoshiroi ne?