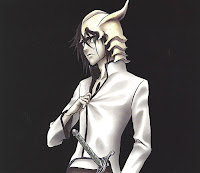 One of the interesting things about a lot of anime series is that they have pretty impressive evil characters. I always have a soft spot for the bad guys, no doubt because of my Evil Twin. Plus bad guys often are that way for a reason. Something in their past has warped them, and being able to understand their motives goes a long way toward making their actions at least forgivable, if not acceptable. But there are bad guys and there are BAD guys. Like everything else with anime, I have a tendency to classify my bad guys. And of course I have my favorites.

The classes of bad guys I use, from your basic worst-scum-imaginable down to guys who are just mostly wicked, include: 1)BADDEST - these are the love-to-hate guys, the characters without anything even vaguely 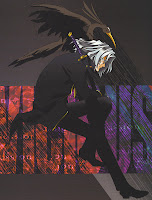 resembling a conscience. They also usually have no acceptable excuses for their actions other than they're just evil to the core. Usually I reserve this category for those characters who fit into the BADDER category, but have committed the ultimate sin from my perspective: they've killed off one of my favorite characters. It's not always true that characters in this group have killed one of my favorites, but if they've killed a favorite, they will be in this group. In this category I put Yagami Light (Death Note), Sennen Hakushaku (D.Gray-man), Muraki (Yami no Matsuei), Vicious (Cowboy Bebop), Cain (Trinity Blood) and Delphine (Last Exile).

2) BADDER - In this class are those evil characters without a single redeeming trait; totally unlovable; unrepentantly evil; generally plotters who roll over everyone and everything in their path without so much as a qualm. *laughing* Okay this sounds a lot like the BADDEST category, but these guys generally have reasons for their actions and, more importantly, they haven't killed anyone I care about. I have a lot of admiration for these guys. *laughing* Well, I do. They're usually so self-centered that they really believe the world revolves around them and should move to their whim and everything and everyone in the world should worship them. I sometimes have a certain amount of that feeling myself, so I 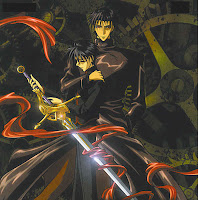 - these guys are usually smaller fry than the BADDERs. Often they're henchmen of the BADDERS, like Ulquiorra (Bleach) or GrimmJoe (Bleach). This category also includes the bad guys that are not quite evil enough to fall into the BADDER group, like the Emperor (Code Geass), Dornkirk (Escaflowne), Furher (Fullmetal Alchemist), Director (Witchhunter Robin) and Dewey (Eureka Seven). A lot of bad guys are this level of evil. I usually also include in this category those people that fell from the good side and became bad, or were bad all along but played as if they were good guys. Characters like Third (Jyu Oh Sei), Jin (Innocent Venus), Sasame (Pretear) and Fuuma (X).

4) NOT GOOD - these are the antiheroes. They're usually not totally evil and it's

more that they just serve as a counter to the main characters. Darcia (Wolf's Rain), Hiwatari Satoshi (D.N.Angel) and Akito (Fruits Basket) are this type of bad guy.

Although I'm putting these guys into categories, there are a lot of these characters that it's difficult to fit into a specific category. Maybe they span more than one category, or just don't fit any class very well. I hate to admit that (because of my love of sorting things), but it's true. Diva in Blood+ could fall into the BADDER class, but compared to say, Aizen, she doesn't really fit it that well. Of course, very few bad guys can hold a candle to Aizen.

I also have two special categories: one is the bad guys who are converted and become good, ex-bad guys so to speak. These guys get a special category because they're generally not very long-lived after they leave the dark side. Yoite (Nabari no Oh), Folken (Escaflowne), Solomon (Blood+) and Brera Stern (Macross Frontier) fall into this category. Actually Brera survived, but bad guys turned good usually don't.

My final special category is the obnoxiously, irritatingly arrogant characters

of others makes you want to do something to shake them out of their defined worlds. Their actions can be either bad or good depending on their whim and the circumstances. Kuchiki Byakuya (Bleach) and Sesshoumaru (Inuyasha) are the most notable examples of this class of "bad" guys. Both have played bad guy roles, but they have also done good things. Both sets of actions were essentially done without regard for anyone but themselves and their own concerns.