Hello! In my inaugural post on my friends anime blog I will step up onto the the soap box of closure in series and the japanese propensity to overuse it. Yoroshiku onegaishimasu!

An excellent example of this is Kurokami THE 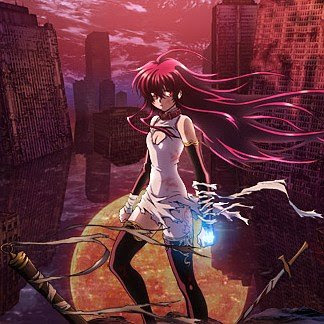 ANIMATION - a series I just recently finished watching. Overall, I would say the series vacillated between being very original and disconcertingly derivative. The universe in which it is set has an interesting premise - the doppeliner system. Every person is kept alive by their amount of 'tera' (which I suppose is a sort of life force or matter). The doppeliner system states that every person has two other people who share their face. The catch is that the amount of tera is divided unequally between them and the person with the most, the so called 'master root', has the greatest amount of luck. And the even more disturbing catch is that if an unlucky substitute meets either their root or the other sub they individual with the least amount of tera will die - either by accident or illness. The series enjoys hitting people with cars in the most brutally shocking way (spraying blood an all). OK. Still with me? Next up, you have a species called mototsumitama which are supposedly keepers of the balance of tera. Incidentally they also have insanely high amounts of tera and so live very long lives. Mototsumiatama can also exchange hearts (literally) with a human to form a contract that allows them to be even stronger in battle assuming they can synchronize properly with their contractor. As I mentioned - an interesting premise. Unfortunately the series too often devolved into the main character, Kuro, and her contractor Keita fighting pointless battles over and over again. The writers seems to enjoy seeing her being beat up over an over again by a never ending stream of seemingly random people.

And so this brings me back to my original purpose for this posting. Closure. In the end of the series Kuro leaves the human world to isolate herself (for reasons that will become apparent should you watch the show). Keita, who we had been led to believe could live a happy life with Kuro, is shown marrying another main character, having kids, growing old and then dying. ?? Ooookay. Was that really necessary? I mean. You watch an entire 23 episodes of a show filled with magic and tera and other possibilities with the two main characters essentially being young people with their whole lives ahead of them. What is the purpose of ruining all that hope and optimism with fast forwarding and showing you the end of Keita's life? I'm not sure if it's a cultural thing or just a 'me thing' (The Notebook ring a bell?) but I despise the circle of life. And I plan to break it if I can.

*grin* This may be my first and last blog entry depending on how it's received. :P
ja ne!
Posted by y at 7:28 AM