It's been quite some time since I talked about the series I'm currently watching or those I've recently watched, so I thought I'd better do an update. There doesn't seem to be any really outstanding series out right now, but there are a few that keep me relatively entertained. They include:
Tegami Bachi Reverse: This is the second series, followup of Tegami Bachi, which you may 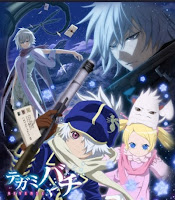 recall me mentioning, ended in a cliffhanger. In Reverse, the series picks up right at that cliffhanger and moves on. Gauche Suede, the character that Lag Seeing spent the entire first season searching for, has become a character named Noir. Essentially, Gauche lost his 'heart', and all his memories, and is now working for/with the bad guys. After a less than ideal meeting, Lag follows all hints of Gauche's whereabouts and is convinced that he can return Gauche's heart and bring him back to his sister. The series hints along the way that the 'bad guys' are not really the bad guys, and I'll be interested to see whether Lag will redeem gauche/Noir, or we'll discover that the 'reverse' is true . . . that the Letter Bees are really working for a basically rotten government. This season is moving much faster than the first season, keeping the plot pace moving along nicely, and there significantly less constant Lag crying than there was in the first season. There's still Lag crying of course. Lag is Lag. It's just less. I'll be interested to see how they end this season.
Star Driver - Kagayaki no Takuto: This series is a surprise, in that I didn't expect to still be

following it after 13 episodes now. It definitely started out on the right foot with me, despite being a mecha series, because the main character, Takuto, is also known as the Ginga Bishonen (Galactic Pretty Boy). This just tickled my funny bone. Anyone who's nickname is Galactic Pretty Boy can't be all bad. I've stayed around because I like the character style, I like the music, I like the interactions between the characters and the plot is different enough to keep me interested (I'm actually still figuring out what's going on). The only major downside to it is the transformations. Every episode has Takuto transforming into his mecha, Tauburn, and into Galactic Pretty Boy, and I get tired of watching the transformation over and over and over. Despite that, I'll keep watching it and see where this series goes. It's fun to watch.
Nurarihyon no Mago: This is another one of those surprise series. I didn't expect to like this one and 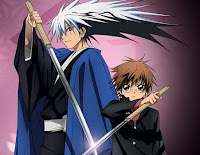 certainly didn't expect it to keep me interested, but both happened. Nura Rikuo is a half demon/half human kid who lives with the demons but tries to be a normal human. At night he becomes a demon who looks like his grandfather, Nurarihyon, who was the leader of 100 demons. Or perhaps at times it's almost as if he channels his grandfather. Rikuo's two main tasks in life are: 1) to prove to the demons that he's worthy to take over his grandfather's position and, 2) to keep his human friends from getting caught in demon politics and mayhem. Again I like this one for the animation and character style (although I still wish the demon form's white hair didn't stick straight out of his head), I like the music, especially the two ED theme songs and the way they're animated, and the plot is keeping me entertained. I'm almost done with this one. I've downloaded the end but not watched it yet. Hopefully the ending won't ruin what's been a pretty decent series.
Shiki: This is a really different series. I felt compelled to watch it because it's

a vampire series. I at least try out almost all of the vampire series. This one is about what happens to a small rural town when a vampire family moves into the big house on the hill. As expected, a lot of villager death ensues. This is another series that I have the whole thing and haven't finished watching it yet. Hey, I've been busy. With this one, I spent the first 15-ish episodes fretting that one of the main characters, Yuuki, was going to get killed by the vampires, which he did, and that another main character, Toshio the village doctor, couldn't figure out that this wasn't an epidemic happening, which he finally did realize. About 3/4 of the village has been killed by the vampires and many of them (including Yuuki) have now 'risen' as vamps. Despite that, both Yuuki and Toshio separately are working to destroy the vampire family who has done all this. The series is bloody and depressing in that so far all the actions against the vampire family have been totally futile, and it has a strange character design style with jagged hair. The music is good though, and I'm far enough into it to watch it through to see how they end it.
World God Only Knows: This series is funny! It's about a totally nerdy gee 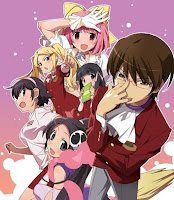 k in glasses who spends every waking moment (including during school) playing dating sim games. He's known in the gaming world as the 'capturing god' because he ALWAYS gets the girl in the game. By an accident, he signs a contract with the devil which requires him to 'capture' real girls. Basically he must make them fall in love with him in order to free them from wandering evil spirits that have possessed them. It's funny because this socially inept guy who hates the real world is forced to win over real world girls. If he doesn't he'll break the contract and lose his head, along with the head of the demon girl who's sent to help him. This is a short series (12 eps) and is entertaining enough to be worth watching, although they could have stopped at ep 11. 12 wasn't really necessary and was a waste of time. The OP is a great song though, and the series music is really nice.
Togainu no Chi: Bloody. Violent. Depressing. And part of the 'depressing' on this one is that it 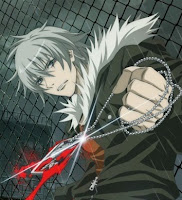 looked like it was going to be really interesting with some nice plot twists and they just rushed the ending and made it a 12 ep series with no resolution, death of a main character, ... just incredibly frustrating because it could have been a decent series. The premise is a guy who is set up to take the fall for a murder and then he's given an out if he goes to a ruined city, takes part in a fight-to-the-death game, and helps destroy a drug syndicate working out of there. The plot had interesting twists, there were interesting characters (I'm always attracted to enigmatic guys in black with sharp katanas), music was decent. It was disappointing that they screwed up the non-ending so badly. Maybe they'll do another season and redeem it.
Anyhow, that's the latest update. Of course Bleach goes on, although I'm about 6 eps behind on that series right now. Hard to believe that series is on its 301 episode. I should really catch up and see what's going on, although I expect they're going to have to do another filler arc any time now.
Ja.
Posted by dai-ET at 4:53 PM