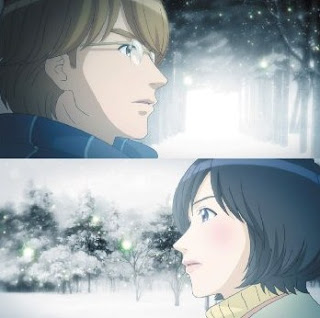 This series is one of the more unusual series I've watched in a long time, and it took a long time to watch it. That's only partly because the subbers were slow. It's also because I had to steel myself to watch new episodes. This series isn't just tragic. It's TRAGIC . I judge this 27 episode series to be about a 10 kleenex box series, a new personal best over the front-running Tegami Bachi, two-kleenex box series. Seriously, I am totally amazed that they can twist people's lives to the extent they did, and pack that much tragedy into one series, and it essentially all stemmed from one lie.

Let's see, where to start.
First of all the series takes some getting used to. I've mentioned this in an earlier blog, but the voices are in Korean with the roles being reprised by the original live action Korean actors. There are both Japanese and English subtitles and the sound of the language takes a while to get used to. Once you get past that though, and can see through your tears, the animation style is good and the music is outstanding. The plot goes like this:

The main characters are a girl named Yuujin and a boy named JunSang.

They meet in high school and fall in love. Another boy in their class named SangHyuk is also in love with Yuujin. JunSang's mother is a famous concert pianist, but she's never married and won't say who JunSang's father is, so JunSang is trying to figure out and find his father. One day JunSang finds out that Yuujin's father is also his father and he agrees to leave Korea with his mother. At the last minute he decides to run back and speak with Yuujin one last time rather than leave her without saying anything, and he's hit by a truck and dies. Yuujin is devastated and tries to go on, eventually agreeing to marry SangHyuk.
In the meantime we find out JunSang didn't die but has a bad head injury and is tormented by thoughts of Yuujin. His mother arranges to have his memory erased through hypnosis and he leads another life as MinHyung. Years later, on the night of her pre-wedding dinner with SangHyuk, Yuujin sees MinHyung on the street and freaks out. She is sure he's JunSang, but he has no memory of her or of JunSang. Yuujin says she cannot marry SangHyuk and she goes to work for/with MinHyung. They get into trouble on a snowy jobsite, he has another head injury, almost dies and begins to remember Yuujin and that he loves her. He finds out his mother had his memory erased as pieces of it begin to return. He asks Yuujin to marry him and then discovers/remembers that they are brother and sister. He also finds out that unless he has an operation the head injury will kill him. He goes though with the wedding and then leaves her without telling her why. He intends to let the head injury kill him rather than having an operation that may cause him to lose his sight, and he doesn't tell Yuujin ANY of it.

are brother and sister. She gives up looking for him and goes to Paris to study architecture. In the meantime JunSang is dying in New York. He finds out that he's NOT related to Yuujin, that SangHyuk's father is his father, not Yuujin's. However he's gotten so bad that he won't go back to her because he's dying. Eventually he gets so bad that he collapses and they operate on him. His life is mostly spared but his sight is only barely there. He's basically blind, and he goes back to Korea. Yuujin works in France for quite some time and finally realizes that she needs to speak to JunSang one more time, so she traces him to New York. There she meets a woman who knows him who asks her why she stayed away after finding out they were not related. Yuujin's devastated again to know that they could have been together all this time. She eventually traces him back to Korea and they meet again, get married and live happily ever after.

So did you follow all that? It's twisty, I admit. I also admit that I was amazed that this anime ended happily. In fact I would have bet my life that it wouldn't have, but it did. It's so massively tragic all the way through that a happy ending is just hard to believe. Plus they tie everything up, which seems impossible given all the twists the plot takes. But they do it. Another unusual aspect of the series besides the Korean language is that the final episode is live action. The Korean actors perform the final episode and their characters are easily recognizable from the anime characters. The story really sucked me in and kept me coming back to watch more, even when I was crying and surrounded by piles of tissues. One of the things that irritated me about the series along the way was how everyone kept Yuujin in the dark about everything, for her own good. She was the last to know about JunSang being her brother, and then the last to know that he was not. And I was irritated by JunSang's mother telling one lie, about who JunSang's father was, and twisting everyone's lives so much.

Overall, since it had a good ending, I'd have to say that I'm glad I watched it. I'm not sure if I'll watch it again though. Can't afford that many kleenex.
Posted by dai-ET at 6:25 PM