I just finished this anime series, so I thought I'd post about it. It's been 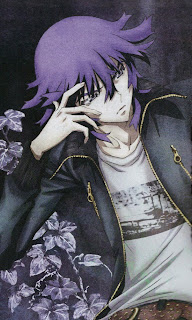 a while since a series left me feeling so ambivalent about it. Usually I can classify them when they're done. Either I love it, I like it okay, it's so-so, I don't like it, or I despise it. Pretty straight-forward classifications. Shiki: I just can't decide how it left me feeling. So here goes, and as usual: massive spoilers ahead!
I began watching this anime for a number of reasons. For one, it's about vampires. For another, the story is done by Ono Fuyumi, who wrote Juuni Kokki. And I admit to being a little intrigued by the animation style which is a little different, with just bizarre hair styles. Natsuno's in the picture to the left is one of the more 'normal' looking hair styles.
Okay, beginning at the beginning. Shiki is a vampire anime, although they don't call them 'vampires'. They call them "Risen" - okiagare. The story takes place in a small village which is mostly separated from the rest of the world. The main characters include: two high schoolers Yuuki Natsuno (guy in the main blog picture above) and Shimizu Megumi, the village doctor Ozaki Toshio, the village junior monk, Muroi Seishin and the main vampire Kirishiki Sunako.
Natsuno's family has moved to the village from the big city and as he's adjusting to a small town he makes friends with a guy named Tooru. Megumi would do anything to get out of the village and has a crush on Natsuno. The three of them are shown below and to the right here. This is where the series starts, and then the Kirishiki 'family' moves into the deserted mansion on the hill. Apparently in small villages people don't know that when strangers move in at night and you only see them after dark, you should be worried. 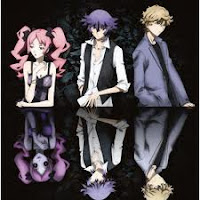 Soon after the arrival of the Kirishiki's, people start to die. The series starts slowly with a character dying in every episode for the first 12-13 episodes. Megumi is the first main character to die (first episode!). She then Rises and begins killing others, including Natsuno's friend, Tooru. The first part of this anime follows the slow decline of each individual death du jour, as they experience blood loss, eventually enough to kill them. Intertwined with each demise, the series follows the slow realization of what's happening by Natsuno and a couple of kids. During this time, Toshio is battling the 'epidemic' and Seishin is becoming friends with the main vampire, Sunako, who is a little girl in appearance. More than halfway through the series, Toshio finally figures out what's happening, Natsuno is killed by Tooru, and Seishin turns down Toshio's plea for help against the vampires and sides with Sunako-tachi. The picture below shows Toshio on the left and Seishin on the right with Sunako between them.
Also about this time, the series finally explains the "Risen". (I told you it started slow) Sunako was afflicted with a disease/curse a long time ago and has to kill in order to live, so she is the core of the plot and the series. When a person is drained/killed by a "Risen" they either truly die or Rise themselves, to become a Risen 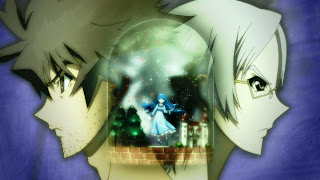 who needs blood to survive. And you can rise as the typical vampire Risen, or as a 'werewolf'. The advantage to werewolves is that they can move about during the day, unlike the regular Risen. Sunako's original group includes some Risen, a human who has sided with them, and Tatsumi, a werewolf. Tatsumi's task is to dig up the buried 'dead' people and figure out who will Rise. It takes 3 days for a corpse to Rise, so he has time. He places those who will rise in a room with a person who is a living sacrifice. The Rising person drains the sacrifice, insuring that the new Risen will adhere to the Risen life style and probably creating another Risen in the process.
The first 3/4 of the series, everything goes for the vampires. I found myself really irritable with the series at times, first because everyone kept dying, and secondly because it took Toshio so long to figure out what was going on. The way he goes about that is beyond gross, so I won't go into it here. Let's just say, be glad you're not his ex-wife. And then the series makes you briefly think that Toshio is claimed by the vamps, and the whole town will succumb and the story is about the vampires after all.
Along the way Natsuno has been killed by Tooru, however his parents ship him to the big city, he Rises there as a werewolf, and decides to destroy the Kirishikis for what they've done. The tide begins to turn against the vampires. Toshio manages, with Natsuno's help, to get clear of the vamps and convince the remaining townspeople of the vampire's existence. The ensuing bloodbath makes the vampires look tame by comparison. The townspeople go on a multi-day rampage destroying all the Risen they can locate during the day, and also killing any living people who might be helping or have helped a Risen. They make no distinctions and take no prisoners, slaying everyone even

vaguely questionable. As the townspeople close in on Sunako and Seishin, a fire gets out of control and eventually destroys everything, including the town that Toshio-tachi were trying so hard to protect.
Although this series starts so slowly, it ends a little fast - has the feel that they're rushing the ending. Survivors after the massive body count: Toshio, Seishin and Sunako probably, maybe Natsuno and Tatsumi. Megumi (to the right) is the first villager to Rise and she's quite happy to be a Risen. She's also the last one to be killed by the villagers, *winces* and very horribly killed at that.

I guess the series is basically an investigation into the nature of good and evil. Is Sunako evil for wanting to survive? Are the villagers any less evil than the vampires? They certainly don't hold back once they start killing everyone in sight. Granted, they never would have started killing without the vampires actions in the first place. The point is, pretty much EVERYONE will kill in order to survive. Only one character in the entire series Rises and then refuses to drain the living sacrifice. She's eventually killed by the villagers during the rampage, so there's no way to know if she could have held out - if she would have eventually really died, gone insane, or started killing others.
So the series left me feeling ambivalent. I don't know if I'm happy that Sunako probably survived or wish she had been killed. Natsuno and Toshio were my favorite characters, but Natsuno died. Now that he's Risen, even as a werewolf, he'll have to have blood to survive. Of course, his survival isn't certain. He didn't intend to survive and may not have. Toshio survived, but considering some of the things he did along the way, he's probably no longer my favorite. Still, he definitely was the one person who was the most single-minded of purpose, with the strength and skills to keep the whole village from being Risen. It's just that by that point, I found myself thinking: would it be so bad to have a whole village of Risen? See, totally divided feelings about the series.
All that being said, I think I consider this a pretty decent series. The body count is much higher than I like, but it certainly makes you think. The plot had definite twists so that you weren't sure where it was going to go, after they got past the death-an-episode thing. And I do like anime series that keep me guessing. And I like the music - hopefully they'll put out a soundtrack. I seriously doubt I'll watch it again, but you never know. Sometimes my subconscious changes my mind when I'm not looking.
Posted by dai-ET at 8:04 AM