This is one of those series that you seriously wish was longer. Jyu Oh Sei is only 11 episodes, and 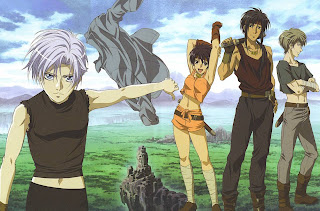 even though they manage to do it well in 11 episodes, there is sooooooo much potential here for them to have done a longer series, that it almost makes you cry to have them pack it into so short a series. Other series that I feel this way about include Canaan and Mahoutsukai ni Taisetsu na Koto. In all three cases they made short series and successfully ended them in the time they had, but the series were so good,and had so much potential for longer series, that I hated to see them end when they did. Jyu Oh Sei especially they rushed things they could have spent more time on in order to end in 11 episodes

Jyu Oh Sei falls into my favorite series group, which is a little strange because it doesn't really meet all my criteria for a good series. They kill major characters (including my favorite character!), and not all those character deaths were really necessary to the plot. Still. The music was outstanding, the plot line was original and interesting, the character style and settings were pretty, and the ending tied things up while leaving room to continue. So even though I wish fewer people had died, it was a good series. The story line is as follows:


Jyu Oh Sei follows the life of Thor Klein, the silver-haired kid in the first picture. Thor and his twin brother Rai are raised on a colony space station called Juno in a solar system known as the Balkan system until they're 11 years old. Then their parents are killed and they are dumped on the planet Chimera, a prison planet known only to the Juno government types. Thor vows to leave Chimera and discover who did this to them and why.

Unfortunately Chimera is known as the planet of the beast king (Jyu Oh Sei) for a reason. Humans must become 'beasts' to survive there. The plant life on the planet is sentient and carnivorous and loves to munch down on humans. The 'day' is 180 days long with a hot, wet tropical climate, and the 'night' is 180 days long with a frigid, snow-filled arctic climate. Humans on the planet are living in enclaves known as "Rings", with the ring divisions based essentially on skin color. Each Ring is ruled by a "Top", who's deputies are known as "Second" and "Third". Women live separately in their own Ring, also run by a "Top". Women choose mates at a specific time of year, and their selection and their lives are sacred. A person becomes a "Top" by defeating, and usually killing, the current Top. The strongest and usually most ruthless person in a Ring is it's Top.

Thor and Rai struggle to survive on Chimera. They get some help from a guy named Zagi who is 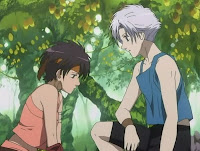 running a group of loose "wild kids" separate from the Rings. For various reasons they run from Zagi-tachi and Thor kills the 'second' of Ochre Ring while trying to escape them also. In the process he loses Rai to the plants and is rescued by Tiz, a girl who is "second" of the woman's Ring. Thor joins the Ochre Ring on sufferance from their Top because Tiz chooses him as her next mate. Along the way he meets Ochre Ring's Third. Tiz and Thor are in the picture to the left and Tiz, Third and Zagi are shown with Thor in the first picture at the top of the blog.


Thor soon discovers that the only way off Chimera is via the "Dragon Pagoda" and that you must be the "Beast King" in order to access it. You must stand at the Top of all the Tops, essentially become the Top of a Ring and beat the Tops of all the other Rings. At 11 years old he is manipulated by Third into fighting and beating Ochre Ring's Top, although he nearly looses his life in the process.


These actions cover the first half of the series. In the second half, four+ years have passed and Thor is almost 16. He has been Ochre Ring's Top during this time and has been improving Ochre Ring's living conditions. He's so adored by the people he rules that they

refer to him as Thor-sama-sama. As the story resumes, it's 'night' and an unknown person has become the Top of Blanku Ring and  is killing off the other Tops, starting with the Top of Night Ring. Thor agrees to meet with the Top of Sun Ring to discuss this unknown Top. At the meeting the Unknown shows up and kills Sun Ring's Top. The unknown turns out to be Zagi. Zagi and Thor meet, and Thor falls in love with Zagi's 'second', a woman named Karimu. Zagi tells Thor that if Thor becomes Beast King, he will be killed by the Colony people. Zagi was sent to Chimera because he saw what he wasn't supposed to . . . all the previous beast kings frozen in storage. Thor agrees to work with Zagi, but then is once again manipulated by Third. This time, Third kills Karimu and makes it look like Zagi has done it to get Thor to beat Zagi and stand as Beast King.

Pagoda with Tiz and Third, as shown in the picture to the right. What he finds out is this:


He (Thor) is the end product of a long line of experiments. Humans cannot survive in the Balkan system, can no longer reproduce naturally and need help to stay alive even 50 years. He was created with a drive to survive and all the natural advantages they could gene-engineer into him, and placed into his "mother's" womb with her regular child, Rai. He was meant to be sent to Chimera as a final test to see if he could survive there. When his "parents" wouldn't allow it, they were killed and he and Rai were dumped on Chimera . . . which happens to be the only planet in the system where children are being born naturally. The Juno government has done all this because they are frantic for humans to survive. The big secret they've hidden from everyone is that Earth no longer exists. Humans cannot go back there, but must figure out how to survive in the Balkan system. Thor also discovers that Third has been working for the Juno Colony the whole time, making sure Thor survived and then making him Top and then Beast King.


At this point, the Colony government types start their plan to make Chimera the next "Earth", which involves changing it's rotation so that it has normal day/night cycles rather 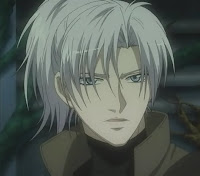 than 180-day days and nights. They are not concerned that this change will likely kill all the people currently on the planet. Thor sends Tiz to warn/help on the planet and he and Third set out to stop the Colony people. Unknown to them, the sentient plants have accessed the station and also take this opportunity to destroy the Colony systems.


Thor and Third are successful in stopping the plot to change Chimera however a lot is destroyed by the plants in the process. Thor survives to return to Chimera, Third does not. Tiz is killed on the surface of Chimera while defending the wounded Zagi, who also ends up dying trying to save her. So in the end, humans survive on Chimera, at constant war with the plants, but coping. Thor is the only main character to survive, although a couple on minor characters also survive with him.


The main theme, human drive to survive no matter what the conditions, is played out nicely in Jyu 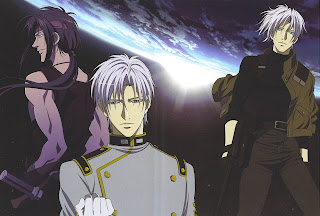 Oh Sei. This picture to the left shows Third in his two forms on the left with Thor on the right. This is Third as he looks on Chimera and as he looks at his final betrayal of Thor. The series is fairly tragic, and one of the reasons is Third. Third betrays Thor over and over because he's been told if he does all this he will get to go to Earth, which has been his lifelong dream. When he finds out Earth no longer exists and all his betrayals have been for nothing, he no longer cares to live and he doesn't. Another tragedy is Tiz. Tiz spends the whole series wanting to bear Thor's child. He finally realizes he loves her and agrees to the child right before he sends her back to the planet, where she dies. But Thor and his super genes, and the human race, will survive on Chimera in the Balkan system.

Given the number of character deaths, it's surprising I like this series. It's really well done though. The character deaths and the short length-rushing make it fall short of a great series, but it's a really good one.