Since I'm currently watching so few series, I'm just randomly going back and picking old series and talking about them now. This week it turned out to be Blood+.
There are things I really like about this series and 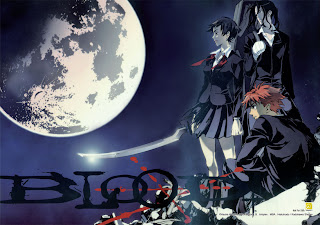 things I hate, but I liked the series enough to buy the DVD, so I guess the likes won out. The series begins with an apparently normal teenage girl, Saya, who cannot remember any of her life prior to the last year. She's been adopted by George who also has two adopted sons, Kai and Riku. Along with her loss of memory, Saya also requires periodic blood transfusions and is monitored by a government-type guy, David. Other than that, things are pretty normal until a tall, dark and handsome man playing a cello shows up and about the same time a creature makes it's appearance and begins killing people. The cello player's name is Haji, and he turns out to be Saya's protector, friend and confidant. In this picture are Saya with her sword, Haji carrying his cello case and Saya's brother, Kai.
One of the things I dislike about the series is how slowly the plot develops and how long it takes to figure out the back-story, as they feed it to you tiny pieces at a time. To cut to the chase: Saya is not human. She was one of twin cocoons found inside a dead monster. The man who found them raised Saya as his beloved daughter and raised her twin, Diva, in a cage with only sustenance - no human contact other than the assistant who leaves her food. Say and Diva discover each other when Saya is a teenager. Saya naively releases Diva from her cage and Diva wreaks retribution on everyone within reach. As it turns out, the twin girl's blood is deadly to each other, and to each other's creations. Thus Saya carries a special sword with channels for her blood to run so that when she's fighting Diva's

monster creations her blood will kill them. Saya and Diva also have the ability to create "chevalier", men who drink either Saya or Diva's blood and become almost-impossible-to-kill henchmen. Haji is Saya's only Chevalier for most of the series, and she created him accidentally. Diva on the other hand has 5 chevalier.
This picture shows Saya with a red rose and Diva with her signature blue rose. The series is a basic good vs evil series, with some best-friend/best-enemy thrown in. Diva and her Chevaliers set out to create an army of creatures to take over the world, leaving enough humans around for food. Saya-tachi are out to stop them. Saya and Haji are supported by Red Shield, a government agency created to fight Diva-tachi and led by David. Along the way, Saya's brothers Kai and Riku join the fight.
Saya and Diva have some weird physical quirks, besides the fact that their blood is deadly to each other. They age very slowly, and they are only awake for about three years at a time, then they must sleep for 30 years. Their Chevaliers stay awake to protect them while they are sleeping. Also, to continue their species (whatever it may be), they can get pregnant by each other's Chevaliers. So Diva wants to trap Haji, and Saya would only be able to get pregnant by Diva's Chevaliers who refer to her as their "Bride".
All of this comes out incredibly slowly during the series. Another thing that I dislike about the series is Saya's personality for almost the first half. She is a whiny crybaby who refuses to fight until forced to, thus allowing a lot of people to die in her place along the way, starting with her adoptive father, George. The series has a lot of character death, which is another thing I dislike.
Among the characters who die are an entire cohort of young people known as the Schiff. These 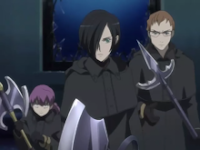 kids are created by Diva's side as warriors, but they escape to live their own lives. The picture to the right shows some of the Schiff, with their leader Moses in the center. Their personal tragedy is that their created lives are incredibly short. They start out as enemies, because they hope Saya's blood can save them. Once she freely offers her blood and they discover it cannot help them, they eventually agree to work with Saya-tachi. And like all bad guys who turn to the good side, they all die tragically.
The most tragic deaths of Blood+ are Riku and Solomon. Solomon is another bad guy gone good. He is one of Diva's Chevaliers who falls in love with Saya and comes over to her side, rescuing her a couple of times. He is accidentally scratched by her sword and her blood kills him. Solomon is shown in the picture to the left below. Riku's death is the most tragic in the series. Riku is nearly 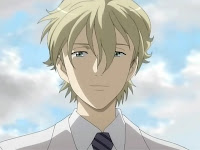 killed by Diva and to save him, Saya turns him into a Chevalier. Just as he's getting used to that, Diva comes back, uses him to get pregnant and kills him. Saya and Kai are consumed with guilt over his death of course.
The series ends with Saya's side triumphing over Diva's side. Saya kills Diva, but lets Diva's twin daughters live. Haji dies (or does he?) while finishing off Diva's Chevaliers. Kai puts Saya in a safe place to sleep another thirty years and is left with the twin girls to raise.
The things I dislike about the series are: 1) the main character deaths, including the unnecessary deaths of Solomon and Riku, 2) Saya's whiny character for so long, and 3) the incredibly slow plot development. So why do I like the series? AWESOME music. I mean just really nice. Also, the plot when it does develop is pretty unique. The story was developed from a movie called Blood, the Last Vampire, but about the only thing it takes from the movie are S 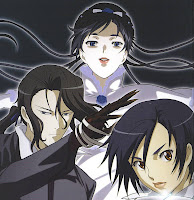 aya and David's characters, and the ability of Saya's blood to kill the vampire creatures. The back-story and plot is really clever, even if it does take them a long time to expose it. The series also has some really nice characters, even if most of them die. The animation and character style is good. And they do a good job of tying up loose ends, although I will admit to being intrigued by the thought of how Kai is going to raise those twins and explain to them that that can't let their blood touch each other. Sounds like a good plot for another series. The other loose end is one of Diva's Chevaliers, who actually seems to have been one of Saya and Diva's mother's chevaliers! So a few intentional loose ends, but mostly things are fairly neatly at a stopping point.
Overall it was a good series. The things I didn't like kept it from being a great series, but I'm glad I watched it.
Posted by dai-ET at 8:13 AM