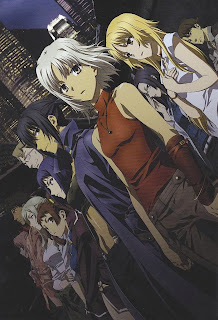 Today I’m going to post a short blog post about a short series named Canaan.  This series has a fairly unique and interesting plot setup, good music, lots of action, and the characters are pretty to watch.  All that being said, it doesn’t end up on my favorite series list.  I’ll go into the reasons for that as I go along.

The title character of the series, Canaan, is an assassin.  She also happens to be the best friend of a young reporter named Maria.  Maria and Canaan met and became friends years ago and are both in Shanghai for an anti-terrorist conference.  Canaan is also trying to get hold of a particularly nasty virus, called the Ua virus, that has been used in bio-terrorist attacks.

Maria survived an attack using that virus sometime before this series takes place because of a vaccine developed by her virologist father.  She remains a target for bad guy groups and Canaan often protects her.  Other people who have survived the virus without the aid of the vaccine are now referred to as Borners.  Borners survived the virus, but have been mutated by it so that most of them have some sort of special skill.  Unfortunately, they also require a supply of special antiviral medication in order to survive.

So Maria is in Shanghai as a reporter covering the anti-terrorist conference and Canaan is there to try to recover the virus from the bad guys.  Arrayed against Canaan, and planning its own nefarious moves, is an organization called Snake, or “Hebi” in Japanese. The leader of Hebi is a cold-blooded, out-for-herself assassin named Alphard. 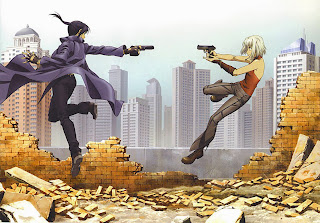 Alphard and Canaan have history and Alphard is ostensibly trying to kill Canaan throughout the series, although it seems like she could accomplish it if she were really serious about it.   It turns out both women were raised and taught their assassin skills by the same man.  Alphard was his first trainee and was originally called Canaan, until she changed her name, left and eventually killed him.  No more of the past history is revealed in the series, so character motivations for the actions they take or have taken are unexplained.  Canaan (current Canaan) also has a skill called synesthesia that lends her some fairly awesome fighting skills when she needs them.

This series is short so there’s not a lot of plot development beyond what I’ve already talked about, although there’s a lot that could have been expanded into a longer series.  There is enough time in the 13 episodes for them to wind in a love story between a bar-tender and a borner, and then have the borner tragically and accidentally kill him.  Which is the main death I object to in the series. 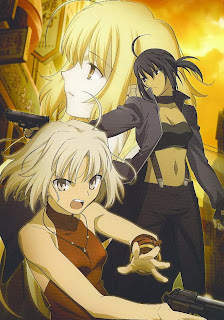 The series is kind of a succession of battles between Canaan and Alphard and it ends with a fight between them.  In this final battle, Alphard ends up cutting off her own arm to escape.  It’s very symbolic because the arm she cuts off has the same tattoo that Canaan has on her arm, or perhaps a tattoo that compliments the tattoo on Canaan’s arm, which is probably related to the man who raised and trained them both.  But even if it’s symbolic, it still makes a totally unsatisfying ending.  Canaan tries to save her from falling and she cuts off her own arm and falls.  So despite all the good things this series has going for it, it ends up falling in the middle of my ‘okay series’ list.  I’m glad I watched it, but wish a lot of it had been different.