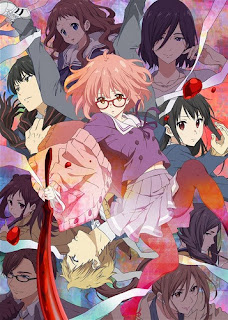 I just finished watching Kyoukai no Kanata, so decided to talk about it in my last post of 2013.

Kyoukai no Kanata is an excellent series.  It’s a short, 12-episode series that is one of those that I really wish they had made longer.  It’s so much fun to watch - great plot, great character and animation style, great music, great interactions among the characters - that it’s really a shame that they only made it 12 episodes. 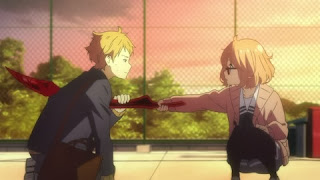 This series is about two high school students, Kanbara Akihito and Kuriyama Mirai.  Akihito is a boy who is a half human / half youmu (demon) and who also happens to be immortal.  Mirai is a girl who is the last survivor of a powerful clan of Spirit Warriors whose power is in their blood, which they can form into solid objects like a sword, and whose main goal in life is to destroy youmu.   The series starts out with Akihito thinking Mirai is going to jump off the school roof.  He races to stop her and  . . . Mirai does a back flip and stabs him through the chest.  So just as you’re expecting to settle in to a nice, slice of life, high school love story, this series begins as a very different, blood-sword-through-the-chest, right from the start, before you’re even aware of any of the background. 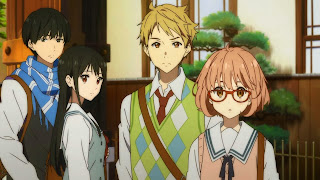 The basic premise of the world the series is set in is that youmu are hunted down and defeated by Spirit Warriors.  Any defeated youmu becomes a gem-studded stone, which can be taken to a special shop and turned in for money.  Thus Spirit Warriors not only rid the world of bad youmu, they also can get paid for their efforts.  Akihito, as a powerful half-youmu, is under constant watch by a house of Spirit Warriors, the Nase, and especially by a brother and sister who go to high school with him, Nase Hiroomi and Nase Mitsuki. He’s also watched by two good youmu, Ai and Ayaka, who run the shop where youmu stones are turned in.  When Akihito’s human side loses control, his youmu side is insanely powerful and nearly uncontainable, so among others, these four watch him and try to keep him contained. 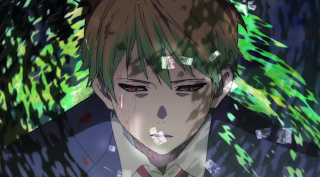 Mirai begins the series by trying to kill Akihito, time after time.  She’s remarkably unsuccessful about this, and he keeps working to befriend her and include her.  Eventually he talks her into joining the literary club that he and the two Nase sibs belong to.  Along the way, Akihito and Mirai fall in love.  Which is extremely problematic, because you find out later that Mirai came to town specifically because she was hired to kill Akihito.  The demon side of Akihito is a monstrously powerful demon, who everyone wants to either destroy or control.  When Mirai realizes she wants him to survive, she works a deal with the Nase, to separate the demon from Akihito and allow him to survive as a normal human – at the expense of Mirai’s life.  Then when Akihito revives and discovers what she’s done, he’s pretty pissed off because he doesn’t care to survive at the expense of Mirai’s life – he’s willing to give his life in exchange for her survival.  Of course.  After all, it is a love story underneath it all. 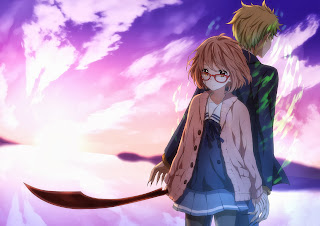 It’s touch and go up until the end of the last episode, but, major spoiler here, everyone survives the series.  I’m glad to be able to say that because the series would not have ended up so high on my list of good anime if they had killed off either Mirai or Akihito. Although you kind of don’t expect everything to turn out well, the ending is nice and satisfying.  Everything does turn out well.  In fact I'd have to say that the ONLY bad thing about this series is the length.  There are so many other details that could have been expanded on with side characters, and with the main characters, that I really wanted it to continue.  Like, what’s really up with Nase Izumi, and why did she have to step down in favor of Hiroomi leading the family (other than the comment that she’s carrying a youmu inside her)?  Or, how did Ai and Ayaka end up running a shop for turning in youmu stones?  Or, WHAT is up with Akihito’s mother?!?  And how did Akihito come to be?  See?  So many more things could have occurred. 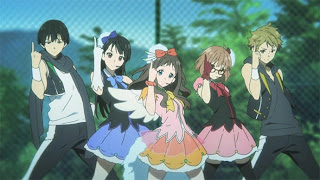 Still, the series is well worth watching.  The character interactions between the four main characters alone are often just priceless, with Akihito’s fetish for girls wearing glasses and Hiroomi’s fetish for his younger sister.  There’s even an episode where they become an idol singing group to defeat an odd youmu.  The series is so much more than just a high school love story.  I recommend it highly.
Posted by dai-ET at 12:33 PM