There are several more new series that I’m trying out so I thought I’d talk a little about them also. 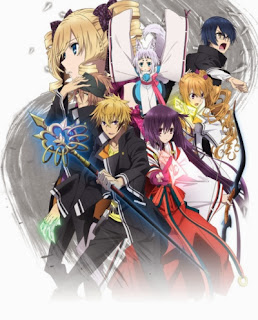 Tokyo Ravens is the next series I’m trying out.  A high school boy named Harutora is a member of the prestigious Tsuchimikado onmyoji family.  Unfortunately, he can’t see spirit energy, so he’s hanging out with friends Hokuto and Touji at a backwater onmyoji school.  One day his cousin/childhood friend, Natsume, who also happens to be the current head of the family, comes to visit.  While she’s there, another girl shows up and uses her spirit power to try to raise her dead brother.  Along the way she kills Harutora’s friend Hokuto.  In order to be able to fight spirits, Harutora agrees to be Natsume’s familiar.  Once she seals that deal, Harutora can see and interact with spirits.  They win a battle against the brother-raising bad girl, and then they go to Tokyo to fight.  It looks from what I’ve seen so far that Harutora will be powerful and will come into his own along the way.  So the plot and relationships are probably going to be pretty predictable.  But it’s pretty and has kept me interested so far. 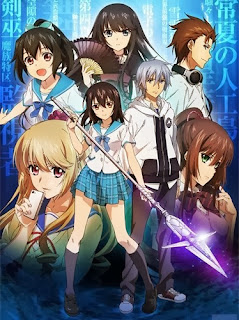 The next one is called Strike the Blood.  I began watching this because I’m attracted to vampire series.  So far the premise here is that a normal high school boy named Akatsuki Kojou has recently become the most powerful vampire in existence (that’s not fully explained at this point).  He is being followed / monitored / protected / attacked by both groups of people and individuals, primarily a middle school Sword Shaman named Himeragi Yukina and a sensei named Minamiya Natsuki, who looks like a grade-school kid.   It looks like Akatsuki will be frighteningly powerful, but that isn’t clear yet.  The conflicted love interests among him and his keepers appear to be fairly standard.  I don’t know if I’ll keep watching this one or not. 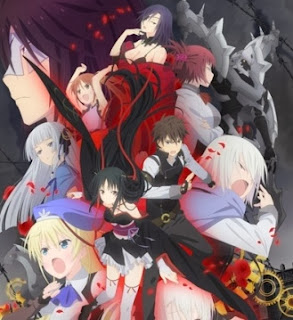 Unbreakable Machine Doll is another I’m watching.  I almost dropped this one after the first episode because it’s a little more fan servicey than I like, but the plot so far has become interesting, and I like the animation style.  This series occurs in a universe where machines and magic interact.  Magicians are also called puppeteers, and they magically control “machine dolls” who are essentially human, although they’re not.   Machine dolls have life via a machine/magic hybrid heart which also gives them personalities and feelings.  The hero in this story is Akabane Raishin, who has come from Japan to a prestigious English school for magician training.  His nickname there is Second Last, due to him being ranked 1375th out of 1376 students.  Raishin’s doll is Yaya, a high-powered combat model who also happens to be seriously in love with Raishin.   Raishin has come to this school for revenge, to learn enough to gain access to the ultimate battle where magicians vie for the title of Wiseman -  the strongest magician.  Riashin’s desire to join the battle is not so much to become Wiseman as to find and kill the magician who killed his entire family.  The series is interesting so far, with characters with personalities that are worth following at this point. 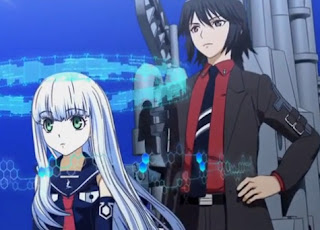 Arpeggio of Blue Steel (Aoki Hagane no Arpeggio: Ars Nova) is the last one I’m trying out.  The premise in this one is that humans have been driven off the oceans by a mysterious fleet of fog-bound, invincible ships.  One man switches sides to those ships and then mysteriously one invincible submarine ship comes to the humans and is captured by them.  That ship has a human-seeming avatar (little girl, of course, named Iona) who controls it and she is programmed to respond only to the son of the man who switched sides.  The series is about the son, Chihaya Gunzou (high schooler) and his friends sailing the seas in the invincible submarine and using it to help the humans defeat the fog-fleet.  I don’t know whether I’ll watch this one more or not.  It probably depends on whether they just do battle after battle, or they do a more interesting plot and some character development.

So along with last week’s post, those are the series I’ve picked up this season.  We’ll see how many of them I keep watching to the end.
Posted by dai-ET at 10:15 AM