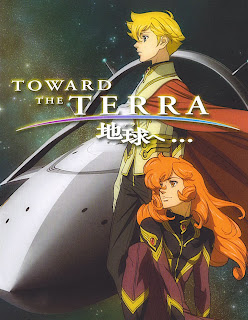 I’m behind getting a post out.  Since new series have essentially just started, I figured I’d go again with an old one.  Today I’m going to talk about Terra e

Terra e, also known as Toward the Terra is a story about telepaths, and an adaption of a manga that came out in 1977.  The story occurs in the far future where humanity is ruled by computers.  Human babies are born from mechanical wombs and given to selected parents to raise until they reach 14 years old.  Then they go through an adulthood exam, which wipes their brain and memories and turns them into functional adults.  In addition, the exam determines if they are latent telepaths, whether they have the Mu factor in their genes.  If they do have the factor, they are culled.  The computers running the human race are rabidly determined to exterminate the Mu telepaths.   The Mu in turn are a race of evolved telepathic humans, who wish nothing more than to rescue all the Mu children and be left alone to live their lives.  They exist on a giant space ship and are constantly searching for the original Terra as a new home.  Terra was rendered uninhabitable by humans before they left it, and the Mu telepaths want to return there and live at peace. 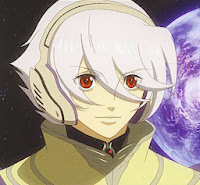 The anime series story centers around the character of Jomy Marcus Shin and covers a lot of years.  In the beginning of the series Jomy is a normal 14 year old boy facing his adulthood exam.  He fails it since he is also a telepath with the Mu factor.  Jomy is rescued from extermination by  the leader of the Mu, a strong telepath named Soldier Blue who is unfortunately approaching the limit of his life and abilities.  Although at first Jomy denies the whole telepathic thing, he eventually takes Blue's place as the leader of the telepaths. 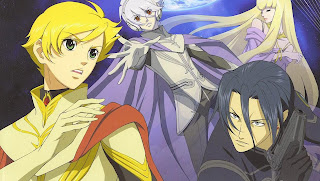 Another main character in the series is Keith Anyan.  Keith is a human raised completely by mechanical means, never having had human parents.  He enters the story when it switches to the military training that young humans undergo to become functional humans who will be involved in the military.  The story here takes place on a space station, and the computer who runs it, “Mother”, favors Keith and is grooming him to be the military leader responsible for wiping out the Mu.  During this phase of the story Keith is responsible for the death of one of my favorite characters in the series, Shiroe. 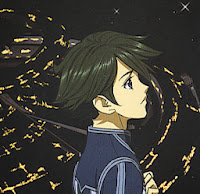 As time passes Keith becomes the primary military leader and begins to go after the Mu, even though he knows his aide, Matsuka, is a telepath who uses his powers several times to save Keith’s life.  Keith is not completely bad though, more of an anti-hero.  He also destroys the “mother” computer and station when he finds out he’s a human who has been created, and for the sole purposes of keeping humans in line and killing the Mu. 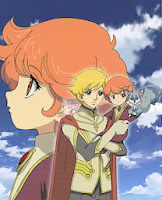 Jomy and the telepaths begin to settle a planet they find and attempt to lead normal lives.  They begin to have children by natural childbirth, the first naturally born humans for millennia.  This generation of kids are incredibly powerful telepaths and are led by the first one of them born, Tony.   They also are much more willing to stand and fight rather than run like their parents.  The planet is located by Keith-tachi and the Mu run again.

Years pass and the Mu find Terra.  In the final battles between Keith and his computer-led forces and the Mu, Jomy and Keith and Blue all die.  But the Mu survive and begin to repopulate Terra. 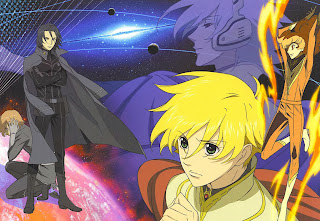 Obviously once again I've skipped over the majority of the subplots and some of them are important.  I would have liked this series much better if they hadn’t felt the need to kill so many people off, both during it and at the end.  Still, it’s a good series, and worth watching for the story line, the really nice animation style and the excellent music.  I recommend it.