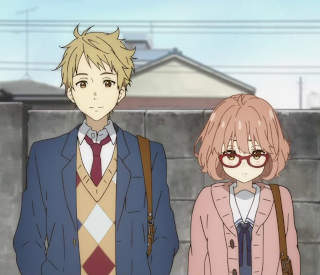 I’ve started watching a few new series which began this month, so here I decided to talk about my three favorites so far.  They are:

Kyoukai no Kanata:  This first one I probably like the best after 4 episodes.  The premise of this series is a world where humans and youma (youkai, demons, akuma, spirits, evil supernatural beings – take your pick of titles) co-exist.  The youma take many different forms, including looking completely human.  They have ways of masking their forms and locations to most humans so normal humans can’t and don’t routinely interact with them.  There are also humans who are Spirit Warriors or Barrier Guardians (depending on your subbing group).  These humans have supernatural powers and use them to destroy or contain the youma that cause trouble.  For every youma they kill, they get paid.  The more dangerous the youma, the higher the pay for killing it.  The owner of the establishment where they go to get paid is herself a youma, so not all youma are bad. 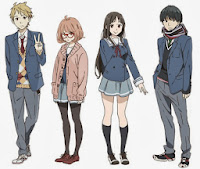 The story revolves around a special, very powerful Spirit Warrior, who also happens to be a short, cute, glasses-wearing girl named Kuriyama Mirai.  Kuriyama, the last member of her warrior clan, is ostracized by other warriors for being dangerous, and she also seems to have trouble killing youma, apparently because she killed her best friend who had been possessed by a youma.  The other main character is a half human, half youma boy named Kanbara Akihito who has a fetish for girls who wear glasses.   The interactions between these two, and among the other main characters is pretty fun so far.  Besides the interesting plot and nice animation style in this one, it’s also quirky.  Quirky character interactions, quirky things happening that I don’t expect to happen, quirky character personalities.  After three episodes I’m enjoying it a lot.  I hope it keeps it up. 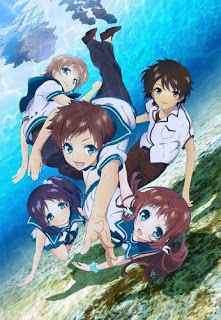 Next in order of how much I’m enjoying it is Nagi no Asukara.  This series has a pretty unique premise.  Humans are divided into two subspecies, ones who live on land like regular humans and ones who can breathe both in air and underwater and live in a village underwater off the coast.  Kids from both groups attend a high school on land.  So far it looks like this series is going to be about relationships, with love triangles/quadrangles occurring between the five main character kids, Hikari, Manaka, Chikasa, Kaname and Tsumugu.  Four of these kids are sea kids.

This series, other than the underwater humans, started out looking like a very predictable plot of high school relationships where everyone is in love with the person who is in love with someone else.  The plot has started to go beyond that basic premise though, so hopefully it won’t get boring.  There are rules around interactions between land humans and sea humans and an interesting sea god involved, so I have hopes for it.   This one is also really gorgeous too, so I’ll watch it for a while. 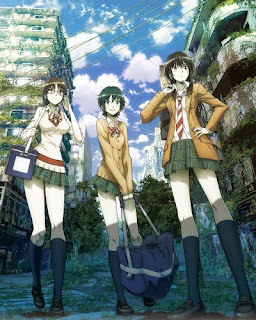 The next series is called Coppelion.  Coppelion is a post-apocalyptic series.  Some type of major disaster occurred in a major city (we’ll say Tokyo), rendering it unfit for habitation unless you like living in barrier suits to stave off radiation poisoning.  The story revolves around three girls, Naruse Ibari, Nomura Taeko and Fukasaku Aoi, who are created beings.  They have been genetically engineered to specifically be able to withstand the radiation and live in the world without the need of barrier suits, as well being engineered with some special talents.  What the story line is after three episodes is that the three girls are sent into the city to locate and retrieve any humans foolish enough to try to be living in isolated secure locations and moving around in barrier suits.  Their job seems to be locating these humans and making them available for retrieval by the people running things.

I’m still struggling bit with several issues within this premise. One is, if you were going to genetically engineer and create humans capable of withstanding radiation and you had plans to send them into dangerous, overgrown, high radiation areas, why would you create three young girls?  And don’t even get me started about if you did create three young girls, why would you send them into the aforementioned areas wearing short-skirted high school uniforms?  The whole high school uniform thing is a pet peeve I won’t go into here. Despite these obvious fallacies, the series so far has been interesting enough to keep me watching.  I’ll be  waiting to see whether a deeper plot evolves or whether they simply do episode after episode of rescues or failures to rescue.  I’m hoping for the deeper plot, otherwise this series may become boring besides being borderline depressing.

So those are the anime series at the top of my list so far.  I’ll let you know how they go, and also if any other series catch my attention along the way.
Posted by dai-ET at 7:43 AM