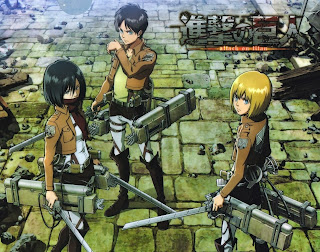 Shingeki no Kyoujin, as expected, ended with a bad ‘non-ending’ ending.  I realize they had to end it that way because the anime series is essentially caught up to the manga, but it’s frustrating to have so many questions left unanswered.   I’ve already given the basic premise of this series in a previous blog post (http://alter-ego-reality.blogspot.com/2013/08/shingeki-no-kyoujin.html), so check there if you haven’t watched it, and I’m going to spend the rest of this post doing even more spoilers than usual. 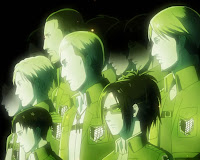 For all my complaining though, the “ending” could have been worse.   The positives on the ending are these:  Eren is gaining more and more control over his Kyoujin (Titan/eotenas/giant) form.  The Survey Corps is alive and well having managed to survive the bad guys’ attempts to disband and destroy it.  The main characters are still alive, which in itself is no small feat in this series.   The intelligent female kyoujin was found out to be Annie Leonhardt, one of Eren-tachi’s comrades, and she was effectively neutralized, even though they conveniently aren’t able to get any answers to the major questions out of her.   The Survey Corp’s Commander Erwin Smith, as well as Levi, Eren, Mikasa, Armin and Jean know that their enemies are among the humans, and the Survey Corps is beginning to find ways to fight those enemies. 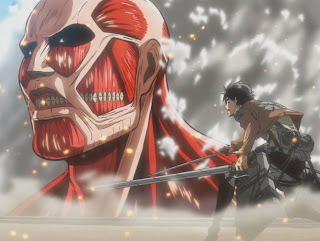 The negatives on the ending are pretty significant though.  Soooooo many questions aren’t answered, but then they’re probably not answered in the manga yet either.   High on that list is WHY is someone among the humans trying to destroy humanity?   WHY were kyoujin created, because at this point they seem to be human creations.   Were the intelligent ones created on purpose and the slow and stupid ones are a byproduct of that creation, or were the slow and stupid ones intentional also? 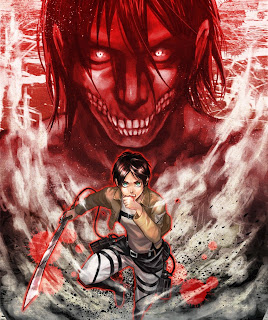 And then there are all the questions around Eren.  How is it that Eren’s father gave him the ability to transform into a kyoujin, and the bad guys didn’t know about it?  Was Eren’s father a part of the group that created kyoujin in the first place, and where is Eren’s father now?  He must have split with them enough to give Eren his abilities, unknown to them.   The bad guys are obviously trying hard to collect Eren, probably partly because they figure he belongs with them, but mostly because he gives the humans a way, and the ability, to fight them.  And the big question:  Who are “they”?!  Who are the “bad guys”? 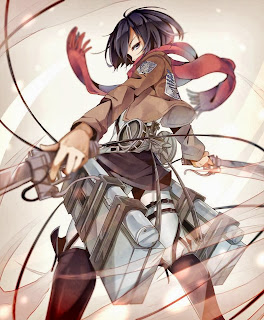 My only hope is that once the manga gains enough ground, they will produce another season or two of Shingeki.  It would be a real shame for it to end at this point, with no further anime series and only the manga going on.   I’ll warn you again though.  This series has a boatload of death and blood in it, including things like people getting chomped in half, people getting heads and other body parts chomped off, and people getting smashed into pulp against trees and buildings.   The story line and characters and anime style and music make it worth watching for me, despite all that.  Only the non-ending (and probably the massive amount of death) keep it from being a great series.