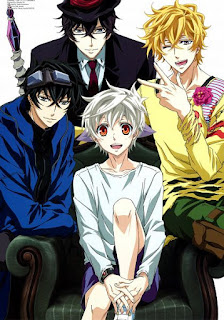 I really like April and October, when a lot of new anime series come out.  This Spring I’ve picked up six new series that I’ve begun to watch.  I’ve only watched about 5 episodes of each one, but I’m going to talk a little bit about them here.

The first series in this group is Karneval.  This series is about the exploits of the members of a government agency known as Circus that seems to be hunting down and destroying Varugas (vulgars?), demonic monsters who apparently were once human but were turned into monsters using either genetic manipulation or drugs or both.  I‘m not entirely sure yet exactly what is going on, but two wandering misfits named Nai and Gareki, who have interesting capabilities of their own, have been taken in by Circus and are being protected by them.  And in addition, Nai isn’t quite human, or isn’t human at all although he looks it.  I like this series so far because it’s pretty and colorful and has lots of not-really-normal characters.  The eye colors in particular in this series are striking.  And of course I always like series that I don’t know everything that’s going on. 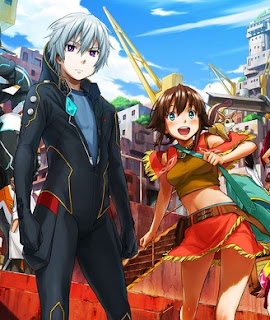 My next favorite is probably Suisei no Gargantia.  This series is about a space soldier and mecha driver named Ledo who is marooned with his mecha on a water world in which industry is barely above the feudal level.  His mecha is discovered and taken in for scrap by the people living on a gigantic, cobbled-together fleet, and they are as surprised by him as he is by them.  The world seems to be old earth, which has thawed out from being totally frozen, but no longer has any continents.  Everywhere is ocean, and the humans survive on large fleets by fishing, salvaging things from the sea floor and trapping rain water.  The interactions between Ledo and the rest of the cast are already interesting and will probably continue to be so as they learn to deal with him and he becomes more ‘human’.   Ledo currently only knows fighting, which he's been doing his entire life.  When he's not fighting he only knows how to “stand by”.  So Ledo has been taken under the wing of a young girl named Amy, who is trying to help him adapt. 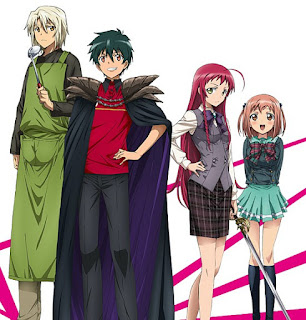 Another series of the six new ones is Hataraku Maou-sama.  This series is hysterically funny, and for sheer laughs, it’s probably on the top of my list.  The Demon Lord Satan and his number one henchman, Alsiel, are driven from their world by the Hero, Emilia, and her army of humans.  Satan, Alsiel and Emilia jump through a ‘gate’ and end up in Tokyo with no magic whatsoever.   They are mistaken for cos-players, and the two demons are reduced to human forms.  Satan Maou-sama ends up in a part time job at McDonald’s and Alsiel keeps house for him.  Hero Emilia ends up working at a call center.   And they all end up actually helping each other along the way.  I’m not sure where this one will go, but it’s damn funny. 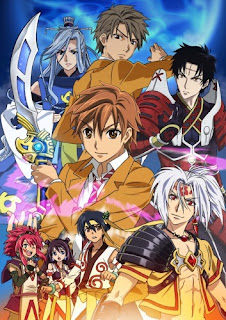 Arata Kangatari is another one I’m enjoying.  This series is about 2 boys named Arata who come from different worlds.  Arata from the magical world is accused of killing the country’s princess and is fleeing for his life.  Hinohara Arata in the modern world is trying to deal with being bullied and ostracized in his high school.  In the first episode, the two boys are switched.  Hinohara must deal with being accused as a murderer and sentenced to prison, and Arata must deal with the modern world.  In the magical world, there are “gods” who are referred to as Hayagami and take the shape of swords.  There are people who can wield these swords/Hayagami and they are called “Sho”.  Hinohara becomes a Sho capable of wielding an unknown Hayagami, and receives a quest to accomplish.   I’m not sure where this one will go either, or how much time will be spent on Arata in the modern world, but so far it’s interesting and keeping me watching. 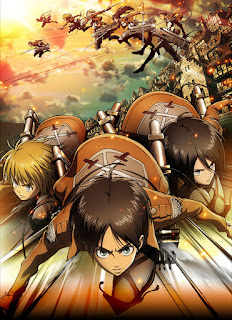 Next on the list is Shingeki no Kyoujin.  This is about a world in which humans have retreated to a last enclave surrounded by three, 20 foot high walls.  They are holding those walls against larger than life monsters who look like gigantic humans, but who can and do eat humans like candy.   In the first five episodes the outer wall is breached, forcing humans to retreat to the next wall, and then the second wall is breached, and the main character, Eren, is eaten.   So far this series is depressing as hell as humans keep losing, and it’s extremely bloody as they get eaten.  In spite of that, the series has drawn me in.  I suppose I keep waiting for the humans to turn the tide on the monsters.  Plus the action of the humans fighting looks like it will be cool if they ever get their acts together.  And of course I’m waiting to see if Eren survived being eaten at the end of episode 5.   They managed to get through episode 6 with him being “dead”, by doing flashbacks of two other main characters, including Mikasa, my favorite character, but I’m going to wait and see if they really kill off one of their two main characters in episode 5.   Oh, and I really like the music in this series. 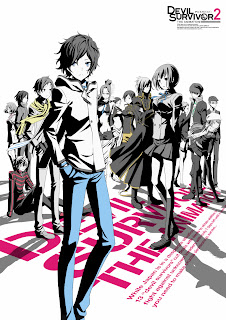 Devil Survivor 2 is the last of the six new series I’ve picked up.   This one is adapted from a game so I don’t expect a lot from it, but so far it’s kept me interested.  Plus it has good music.   In this story, kids have picked up a phone app that shows them the face of their dead friends – right before the friends are actually killed.  And it’s an incredibly accurate app.   Kids who die the first time have the option to live again, but as demon Summoners who must summon their demons to fight battles with the bad guy demons who are trying to destroy the world.  If they die a second time they appear to be dead for good.  The story follows three kids, Hibiki, Niita and Daichi as they become Summoners and try to protect the world and the people around them.  As Summoners they are sucked into the actions of the paramilitary group trying to protect the world.  This group is led by one of those characters you love to hate, an excessively arrogant asshole who moves straight toward some purpose only he knows and often across the bodies of those around him.  His name is Yamato, and the verdict is still out as to whether he’s a good guys or bad guy.

So those are the new series I’ve picked up.  I’m glad to have new anime to watch and look forward to continuing to watch these.