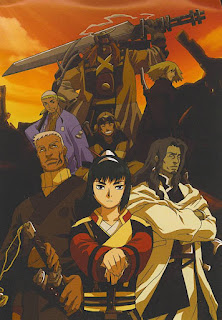 Samurai 7 is an anime series based on the 1954 film by Kurosawa Akira, Seven Samurai.  It’s the story of a small village of rice farmers who decides to hire samurai to guard them from the depredations of bandits. 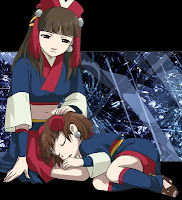 The setting of the anime series is a semi-feudal society but with mechanization, including flying machines and “machine-samurai”, samurai who are crosses between machine and human.  The story takes place some years after a massive war.  Samurai who fought in the war are now scrabbling for their existence, and tend to fall into two camps, those who hire out as bodyguards and maintain an honorable profession and those who resort to banditry – and some who do both.  The farming villages are susceptible to having all their rice stolen by the bandits, so the small village at the heart of this story sends their priestess, Kirara, her younger sister Komachi and a man named Rikichi to the big city with rice.  Their job is to hire samurai to defend their village and to return with them to the village before the current rice crop is ready for harvesting. 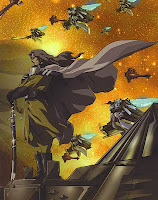 Kirara-tachi struggle in the city and originally don’t make any progress.  When they have some trouble, they are helped by a young samurai named Katsushirou, but Kirara doesn’t want to hire him because he has no battlefield experience.  They begin to lose hope of finding good samurai and then they meet Kanbei.  Kanbei was a general in the war.  He starts out refusing to help Kirara-tachi, but ends up convinced to do so.  With his help they find six more samurai who are willing to take on the job.  While in the city, Kirara catches the eye of a minor lordling, Ukyo, and she and the samurai are pursued back to the village by his minions.

The 7 samurai are Kanbei, Shichirouji, who was Kanbei’s former subordinate in the army, Kyuuzou, who was one of Ukyo’s minions but defected to Kanbei-tachi, Gorobei, an ex-samurai working as a street-performer, Heihachi, a samurai expert in machines, Kikuchiyo, a machine samurai, and lastly Katsushirou, who Kanbei agrees can join them.  These seven return to the village with Kirara-tachi and begin preparing the village to defend itself.  As they work at this task, the samurai learn about farmer’s lives and vice versa.  After some false starts and misunderstandings they all begin working together.

While they are preparing, Ukyo back in the city is found to be a clone of the current emperor, who is dying.  Ukyo is taken to the Capitol along with several other clones, and through his own machinations, becomes the next emperor.  During this time Kanbei goes to the Capitol to free Rickichi’s wife, Sanae, who was taken to the Capitol for the previous emperor.  Kanbei is taken captive, but escapes, taking Sanae with him and racing back to the village with emperor Ukyo and all his forces in pursuit. 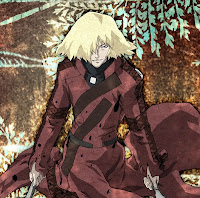 This is a good series which explores the divide between honor and greed, and basically teaches the lesson that people are people.  There are both honorable and dishonorable samurai as well as honorable and dishonorable farmers.  And just because a person is a samurai does not make him honorable.  The series covers Katsushirou learning to kill and includes one of the more tragic scenes I can remember from any anime series.  Kanbei spends the series trying to teach Katsushirou about honor and swordsmanship.  One of his lessons includes that killing with swords is honorable, killing with guns is not.  Katsushirou worships the other samurai, especially Kanbei.  In a scene late in the series, Kanbei is about to be killed and Katsushirou, who is too far away, picks up a gun and kills Kanbei’s attacker . . . and at the same time kills Kyuuzou who was standing behind the attacker, about to take him out with a sword.   Katsushirou’s intentions were good.  He may or may not have saved Kanbei, but he definitely killed Kyuuzou, and he has to live with that knowledge.  I may have been almost as upset as he was because Kyuuzou was my favorite character and his death was meaningless.

As usual, this is the bare bones of the plot.  Much more happens along the way and many more characters are involved.  Overall the series is very much worth watching, especially if you like action, and samurai anime.  The plot’s good, the characters are good and the music is good.  I recommend it.
Posted by dai-ET at 2:54 PM