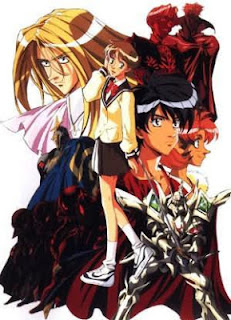 Escaflowne is another series that I watched very early in my anime watching career.   At the time I wasn’t aware of all the stereotypes involved in this series, but even if I had been I suspect I still would have found it worth watching.   I’m going to talk about the series in this post, NOT the movie, which I did not think was worth watching.

Escaflowne is a fantasy, mecha, magic, winged-people, dragons, floating rocks, transformers, love story.   How’s that for a description?   This series follows the exploits a high school girl who is accidentally dragged into the battles of another world.   Kanzaki Hitomi is your relatively normal average high school girl with a penchant for reading people’s fortunes in the tarot cards and being right.   She’s also a little psychic in that she has visions and she’s on the school track team.   While running a practice race which is being timed by a boy on the track team that she has a crush on, she runs into a dragon-hunting Prince from another world named Van Fanel . . . literally runs into him.   He slays the dragon which has appeared with him in her world, and Hitomi and Van return to his world, just in time to see his kingdom destroyed by invaders. 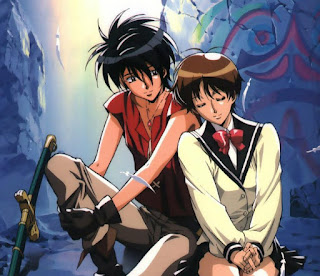 This is the background of the story.   Hitomi’s world is a blue marble in the sky of Van’s world.   Van’s world has floating ships and magic, and Van himself has wings when he needs to.   He also is the surviving Prince of his kingdom and has the power to drive the kingdom’s special mecha, Escaflowne.  Escaflowne also has a dragon form and can fly in that form.   With his kingdom destroyed Van is a target of several bad guys.   He and Hitomi flee and take refuge in a neighboring kingdom. 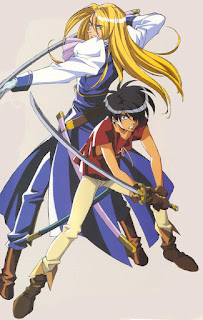 The story is a love story that starts out as a love triangle between Hitomi, Van and Allen Schezar, a gorgeous soldier from the kingdom they take refuge in.    Hitomi, being a high school girl, doesn’t understand her true feelings for the two men, so the love story is interwoven throughout the series.   The series does a great job of following the characters as they each wrestle with their own demons and essentially grow up and/or come to terms with their pasts. 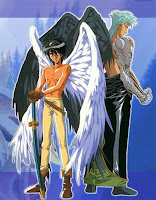 Escaflowne has something for pretty much everyone.   It’s an epic saga about fighting to restore a kingdom’s pride, honor and lands, as well as a love story.   It has mecha/transformer creations and people with magic abilities and gifts.  There are battles between individuals and between kingdoms.  There is trust and betrayal between brothers, and sacrificing one’s life for others.    Looking back at it, it really does include an incredible amount in one series.  It also has some negative aspects, including the token death of Van’s brother, Folken.   I really hate unnecessary, token deaths.
As usual, this synopsis doesn’t begin to cover all the details of the plot or even a small part of the total cast of characters.  It’s simply a bare bones description of the basic story and main characters.   There’s so much more detail involved, that a single post can’t do it justice. 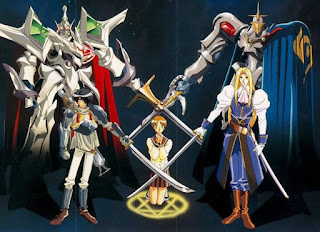 The series does a good job of tying up the loose ends and wrapping everything up at the end.  Despite that, I didn’t really appreciate the ending, or rather I would have ended it quite differently.  That and the token death were my two negatives about this series.  Everything else was really well done.  The music is wonderful.  Yoko Kanno did the music, so of course it could be nothing short of exceptional.  The plot is unique enough and entertaining enough to keep me interested  and waiting anxiously for the next DVD to come out, as I was watching this series before I learned how to download anime.   Overall, it’s a good story and fun to watch.
Posted by dai-ET at 2:02 PM