I have to say, I didn’t like Eureka Seven Ao anywhere near as much as I liked the original Eureka Seven.  The original series may have been a little long (50 episodes), but the series was good.  It had a pretty nice plot, not too straight-forward, but not ridiculously complex either.  It had great characters who grew and developed through the course of the series.   And it didn’t overplay the mecha aspect of the series.  The mecha was definitely there, but not the focus. 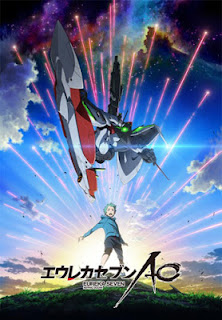 On the other hand Eureka Seven Ao didn’t really achieve any of that, other than not over-playing the mecha aspect.  The plot was COMPLEX.  And though I do like a plot that takes me a while to figure out, this one tended to irritate me more than intrigue me.  For example, the big question from the opening episode is why the main character, Ao, who is clearly the son of Eureka and Renton from the first series, why is he on earth (which was not the planet in the original series), why is he there alone, and why are the scub coral there?  Okay, that’s three questions, but you get the point.  The answers don’t come until the end of the series, and a lot of complexity happens in between.  For example, the earth scub coral has a weird ‘core’ that when used as a weapon changes the world to an alternate world, and things that have happened now have happened differently.  Plus the plot wavers back and forth between the scub coral being good and needing protection and being bad and needing destruction.

That’s probably the other thing that I didn’t like – there was a lot of back and forth guessing about who the good guys really were, always assuming that Ao is by default a “good guy”.  I think I like to be able to tell who I’m rooting for – maybe because I sometimes do root for the “bad guy” side.

Bottom line plot, and there’s some big spoilers coming here so if you haven’t watched the series and plan to, you may want to stop reading here. 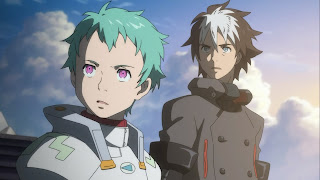 Renton and Eureka have child who dies because apparently a half human-half corellian child cannot live in a place where there are high trapar levels (their whole planet).  When Eureka gets pregnant again, they come to earth, where Ao is born.  Unfortunately they either bring scub coral with them or it follows them to earth.   So Renton uses the earth scub coral weird properties to go to earth’s past to try to eradicate the scub when it arrives, and Eureka is trapped in the alternate world timelines, leaving Ao to be raised by strangers and make his way alone.  In the end Eureka and Renton are reunited with each other and united with Ao, but Ao convinces them not to eradicate the scub coral because so many of his friends are infected by it and will die if it’s gone.  So they leave him there on earth, knowing that as the scub increases, and the trapar levels increase, Ao will eventually die.  End of story.

That’s the simple version of the plot and leaves out a LOT of detail, but I think you see why I liked it less than the original.  My feeling is that I should have just quit with watching the original Eureka Seven only.
Posted by dai-ET at 5:03 AM