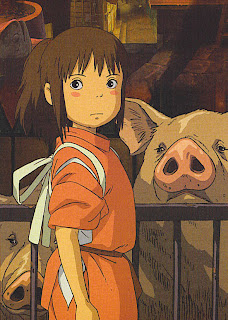 Another Miyazaki Hayao film that’s one of my favorites is Spirited Away, or Sen to Chihiro Kamikakushi.  This story is about a young girl named Chihiro who is very unhappy because her family is moving and she has been uprooted from her friends and school.  The story begins with Chihiro and her parents driving to her new home. They take a wrong turn along the way, and end up on a dead end road.  At the road’s end is a tunnel which seems to lead to an abandoned theme park.  Against Chihiro’s will her parents explore and Chihiro ends up taking an amazing adventure. 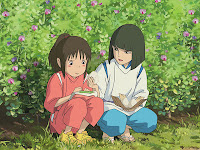 It seems that the “theme park” is actually a small town and hot spring/bathhouse that caters to the gods.  Because Chihiro’s parents gluttonously help themselves to the gods’ food, they are turned into pigs, and Chihiro must find a way to rescue them all.  In order to do that Chihiro is befriended and helped by a boy named Haku who works for the witch named Baba-sama who owns and runs the bathhouse.  Chihiro manages to get a job working at the bathhouse, makes new friends and begins to grow up, learning to fend for herself and working to find a way to rescue her parents.  When she signs the contract to work for Baba-sama, Baba-sama steals part of her name changing her from Chihiro to Sen.  Haku helps her remember that she’s Chihiro.  He also helps her stay in the realm of the gods in the first place and helps her achieve her purpose of rescuing her parents.  Along the way Haku runs into trouble with Baba-sama’s twin sister, also a witch, and Chihiro discovers Haku is a river god himself.  She ends up rescuing him also, eventually returning his rightful name to him which was stolen from him by Baba-sama when he began working for her. 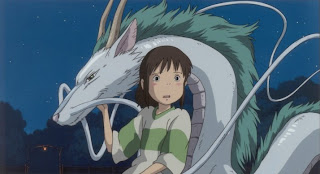 At the start of the movie, Chihiro is very near the top of the list of all time worst whiny, crybaby characters.  Through the course of the movie though she grows and changes and becomes a strong young girl.  In the end Chihiro rescues herself, her parents and Haku, and is instrumental in rescuing a strange god named No Face and an old river god.  She also changes the lives of several other characters for the better, most notably Baba-sama’s large son.

This film is about a young girl growing up, but it’s also has a lot of life lessons along the way, about accepting what life hands you and dealing with it, about supporting your friends and accepting them, even about not being a glutton.  It’s wonderful to watch and of course with Joe Hisaishi’s music, it’s wonderful to listen to.   I would honestly be hard pressed to decide which Miyazaki film is my favorite, but this one is definitely near the top.
Posted by dai-ET at 5:08 PM