I just finished watching K and all I can say is:  “How could they ruin a great series that way!!??!!”  Needless to say I was less than happy with the ending.  And once again had it confirmed that you can’t decide whether a series is any good until you see the ending.  Damn! 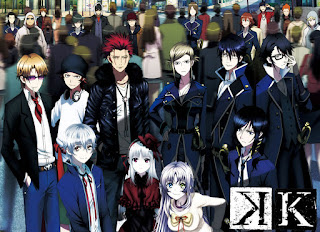 K has everything going for it – awesome, way cool characters, great music, a really unique plot.  It’s too short of course.  Only 13 episodes.  But besides that, it’s a wonderful series, right up until they kill main characters in the last episode.  Damn, I really hate when they do that.

So what’s it about?  It’s about color Kings.  A genius researcher named Adolf Weissmann discovers how to essentially give people super powers.  Each King has a different super power associated with a different color.  Weissmann himself is the first and original King, the Silver King, and he can manipulate gravity and is immortal. Central to the story are the Red King, Souh Mikoto, and the Blue King, Munakata Reishi.  The Kings, because of their powers, cause people around them who have the capacity to gain lesser powers like theirs.  So each King has a group of followers.  Mikoto’s follows are a yakuza-like gang called HOMRA.  Reishi’s followers are a paramilitary group called SCEPTOR 4. 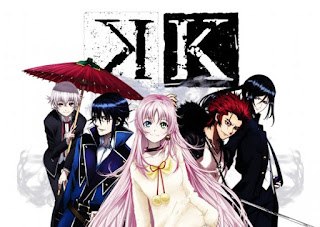 The story line revolves around three characters, 1) an apparently clueless, white-haired kid named Isana Yashiro, or Shirou for short, 2) a cat/girl named Neko who appears in girl form in the first two pictures in this blog and in cat form in  the last picture, and 3) a cool, powerful fighter named Yatogami Kurou, nicknamed the Black Dog.  At the beginning of the story a much beloved member of the HOMRA is murdered by the new Colorless King – a wildcard King with the ability to effect, and in this case take over, the other Kings.   Shirou is pegged as the murderer and spends much of the series fleeing various groups while occasionally showing seriously powerful abilities himself. 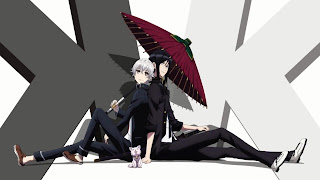 See?  Horrible ending.  Dead Kings!  Souh Mikoto, the red King, is definitely dead, as is the wacko colorless King.  Shirou may be but Kurou and Neko remember that Shirou/Weissmann/the Silver King has said he’s immortal, so they go looking for him.  It’s likely that he survived, although they do not show him alive in the series.  Still, I really liked Souh Mikoto and hate that they killed him off.

I also wish the series had been longer.  It’s a really cool series and there’s a lot that could have been done with it.  It's definitely worth watching.  Just brace yourself for the ending.