Cowboy Bebop is WAY up there on my all time favorite anime series list. 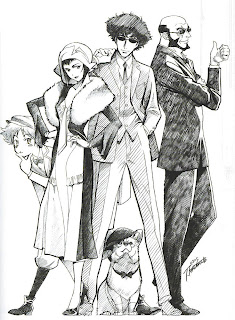 That's interesting when you consider that it breaks one of my cardinal rules for a good anime series. My favorite character doesn't survive the series. Given that, it's fairly weird that I even like it, let alone consider it one of my all time favorites. Even so, it's an awesome series. This first picture has the cast dressed in retro clothes. This isn't even close to the style of the series, but I've always liked this picture. Most of the pictures in this post come from an artbook of mine.

One of the things that makes this series extraordinary: Cowboy Bebop has music to die for. Yoko Kanno is the composer, of course. I consider the music for this series as one of her more spectacular efforts. There are so many good songs, I pretty much love all the Bebop soundtracks, including the movie soundtrack. Among my favorite songs are "Real Folk Blues", "Rain", "Tank", "Space Lion", "Green Bird", "Gotta Knock a Little Harder" which comes from the movie, and of course "Blue". "Blue" is one of my all time favorite songs, not just from this series. So the music is one of the big pluses of the series.

Another plus is the plot. This series definitely falls into the unique plot category. "Bebop" is the name of a somewhat beat up space ship whose crew includes two guys named Jet and Spike. In the picture at the top Jet is the balding guy standing to the right and Spike is the fuzzy-headed guy in the middle. Spike and Jet are bounty hunters, and in the universe of this series, bounty hunters are collectively known as "cowboys". And there you have the series name. Jet and Spike make their living collecting and bringing in fugitives from justice for the money in order to keep the bebop stocked and fueled. It's a pretty bare subsistence-level existence, but the guys are mostly content with that. However, as the series progresses, they manage to collect some

passengers on bebop as well.

The first addition to their group is Faye who is shown with Spike in the picture above. Faye is a con-woman and a bounty hunter, who also happens to have a really bad gambling habit. She bounty hunts to support her gambling habit, and staying on Bebop is an ideal situation for her since she can do it without paying any rent and the ship is continuously changing locations. Next they pick up an experimental (and extremely intelligent) Welsh Corgy in the course of a bounty hunt who they name Ein. Lastly they are joined, entirely against their wills, by a pre-teen, wacky computer genius named Ed. Ed and Ein are shown in the picture to the right. In each case, Spike is completely against adding to their crew, but the additions occur anyway. Part of the attraction of the series is the interactions between the characters. The character style itself in fun. This is not a series with gorgeous characters, but they seem real and their interactions are priceless. Besides the Bebop, Spike and

Faye have their own small ships in which they come and go from the Bebop. At the bottom of the post, Spike is shown with his small ship, the Swordfish.

Most of the series is ostensibly about the various bounty hunts the group undertakes and their many antics, but along the way, background on the characters is slowly explained, and a deep plot becomes evident. Each of the characters has at least one episode devoted to their past and at least partial resolution of their issues. The deep plot revolves around Spike. Spike was originally a member of an organized crime syndicate called the Red Dragon and had a partner named Vicious, whose name turns out to be particularly apt. Spike and Vicious during their Red Dragon days together are shown in the picture to the right. Spike fell in love with a member of the gang named Julia, and tried to get himself and Julia out of the organization. Julia wouldn't go with him and he left. During the course of the series, Spike finds out Julia was ordered to kill him, and is on

the run from the organization for refusing that order. Vicious finds out Spike is still alive about the time Vicious stages a bloody coup in the organization and takes over. Vicious sends people to kill Julia and Spike, just about the time they find each other again. Julia is killed by them, and Spike goes after Vicious in the last episode. As he tells Faye, he's not doing it because he wants to die. He's doing it in order to live. Spike kills Vicious, but them dies himself from the wounds he receives.
The series pluses even outweigh the death of the main character (who happens to be my favorite character!) in the last episode. It's tragic as hell, but it's got so many good points and interesting points, so many life lessons and great characters, and it's so funny and poignant and bittersweet . . . I simply have to suspend the rules for this one. And maybe that's what makes a series great anyway. 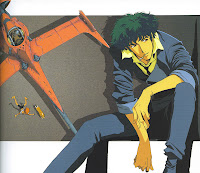