I seem to be having trouble posting more than once a month lately. I'm going to have to see if I 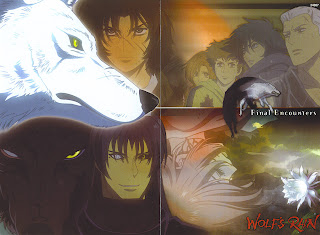 can find something to blame that on. Or should I be glad I can get to it once a month? Hmmmmm.
Sometimes I'll just randomly watch an old series for the fun of it. Lately there hasn't been a lot of great new anime out, but even when there is I'll often pull an old series on a whim and watch it again. The nice thing about doing that is that you know what to expect. You can just sit back and enjoy the music or the animation style, the details of scenery or plot, anything about the series without having to concentrate on the subtitles, or worry about who's going to die next. Plus in the case of Wolf's Rain, you know which episodes to skip.
I'm not an episode skipper as a general rule. I'm anal retentive enough that I have to watch a series through from episode 1 to episode whatever, in order, as they come. Even re-watching,

I usually watch the whole thing in order. (Ask me how many times I've seen Nuriko die in Fushigi Yuugi.) But Wolf's Rain is a little different for some reason.
I'm not sure what they were thinking when they made Wolf's Rain. I have to say up front that I like this anime series, but it did make me crazy in several ways. First of all, there are four entire episodes in the middle of Wolf's Rain that are unnecessary. They are total flashback/rehash episodes from the perspective of the four main characters. Hello. We just saw all that. Then, to add insult to injury, they stop the series at 26 episodes but release episodes 27-30 on the DVDs. So you're thinking, okay you could have left out those four recap episodes and used 27-30 and still ended with 26 episodes. Then, to add insult to insult to injury, although ALL the characters are alive at the end of episode 26, when you actually get and watch episodes 27-30, they kill off the ENTIRE cast in those last four episodes. So I ask you, what were they thinking?

For all that, Wolf's Rain is a good anime series. The story centers on four wolves, Kiba (Fang), Tsume (Claw), Toboe (Howl) and Hige 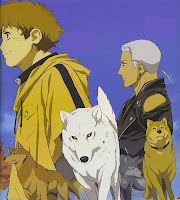 (Whisker). Kiba is determined to find Rakuen (Paradise) and he ends up dragging the other three with him. Along the way they come across Cheza, who is the human incarnation of a moonflower who will lead them to Rakuen. The plot premise is completely unique, wolves who can appear as humans, searching for Paradise as the world is coming to an end. I really like unique plots that aren't the same predictable story over and over again, and this one meets that criterion perfectly. The series' music is beyond awesome. Yoko Kanno of course. She is superb in the soundtracks from this series. The animation style is extremely good. Everything about it is good, except that they drop the plot at the end and they kill the whole cast. As you know, the end of the anime makes or breaks it for me, and this ending broke this series. It went from a great series to a good one. Still I liked it enough to buy the DVDs and to re-watch it.
Interestingly Wolf's Rain is a reverse-harem-type anime. I know, I know, the main female character is really a flower not a girl, but that also adds to the series' uniqueness. And I do have more tolerance for reverse harems that regular harems. I suppose any type of harem anime can be done well with a strong plot, or it can be too focused on the character surrounded by his/her opposites to have a good story line. In Wolf's Rain the harem is subtle enough to be missed, not only because the girl is a flower, but also because there are other character side-stories on-going besides the four wolves finding the flower girl and trying to escort her to Paradise.
Basically Wolf's Rain is one in a long line of anime that I've found it necessary to alter reality and find my own, much more satisfactory ending. Like: At least some of them survive and find Rakuen and all their struggles weren't totally futile. Doesn't seem like too much to ask.
All that being said, I've watched the series a number of times and will no doubt watch it again, although I may watch eight less episodes than the full series. You can do that when you're re-watching.