Best Friend-Best Enemy (BF-BE) is a theme that's pretty common in anime. It's not particularly one of my favorite plot devices, but it's so common I thought I'd just talk about it. With this theme, two best friends, usually childhood friends that have grown up together, end up fighting each other. They fall out onto opposite sides in the grand scheme of things. The reason it's not among my favorite types of anime is because usually a LOT of angst is involved in them having to fight each other. Plus it seems like there's often a LOT of character death in this type of anime. Plus I always get frustrated and want to knock their heads together and tell them to get over it and just TALK to each other.
A classic example of this type of anime is Fushigi Yuugi, with childhood friends Miaka and

Yui fighting against each other in a series of world-spanning battles for supremacy. Of course they don't fight each other directly. They both have seven protectors/fighters/minions who spend the series slowly killing each other off ... after you get to know and like them of course. This series is a good example of the extensive character death often seen with this this type of plot.
Other examples of BF-BE anime include Trigun and Dragonaut. Dragonaut is a pretty messed up series, as well as being overly fan-service-y, but one of the basic premises of both these series is two central characters who grew up together as best friends and then the best friend goes bad and spends most of the series trying his best to kill the main character. In Trigun this theme doesn't become apparent until later in the series, but it's there. The main character's best friend in these two anime series becomes a total whacko, but in both cases and in Fushigi Yuugi as well, that best-friend-gone-bad (BFGB) is essentially redeemed in the end. Redeeming the BFGB is always the best possible ending for this type of anime, but unfortunately it doesn't always happen.
Sometimes the main characters and their 'Best Friends' just aren't that lucky. In Garei Zero, the

BFGB ends up being killed by the main character who never stops loving her even when forced to kill her. This is another reason why this isn't my favorite type of anime. It often ends up being really tragic. Code Geass is like this also, although they do leave you feeling in the end that Suzaku didn't really kill Lelouch, that Lelouch survives in some form.
A series that is totally tragic (2 Kleenex box series), essentially from beginning to end and is probably the ultimate example of the best friend - best enemy type is CLAMP's X. Not only are the main characters childhood friends who must battle each other for the future of the world, but the BFGB (Fuuma) actually kills the main character (Kamui). Fuuma also ends up redeemed in the end. And on top of that the theme is repeated in lesser characters. Subaru, a character from Kamui's group kills his counterpart in Fuuma's group, Sheishirou. The plot is complex here 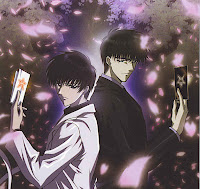 because Sheishirou is a figure from Subaru's past, who Subaru both loves and hates for killing his twin sister. Of course, CLAMP are masters of the twisted plot, as well as the tragic anime. Sometimes it's hard to believe they also did Card Captor Sakura.
Sometimes the BF-BE theme is not such a major part of the plot, but is still present in some form in a series. Often it's just that people on the opposite sides care for each other to some extent. Examples of this include Nabari no Oh with Miharu and Yoite, Withchunter Robin with

Robin and Amon, and Saiunkoku with Shuurei and the red-haired guy. In all these cases, the two characters are on opposite sides in the main plot battle, but they care about each other and it affects their actions.
Occasionally the BF-BE theme appears in a series in a slightly different form. It comes up as a person the main character cares about and trusts betraying him/her. This is my least favorite form of BF-BE. I'm not fond of the betrayal theme. Examples of this are Third in Jyu Oh Sei, Durant in Chevalier D'Eon, Yuuya in Bakumatsu and Mansairaku in Otogizoshi. Even Bleach has an element of this although Byakuya's 'betrayals' have all been logical. Hmmmm. Byakuya would make a good Mr. Spock come to think of it.
In the end I suppose I'm not fond of the BF-BE theme because you shouldn't be in conflict with people you care about. Still it's prevalent, and I've enjoyed watching most of the anime I've mentioned here. I like it better when it's a smaller part of the overall series and not the main theme itself.
Posted by dai-ET at 6:16 AM