It's always amazing to me how fast the time passes. It's been almost a month since my last post, and November is almost over. Where does the time go? 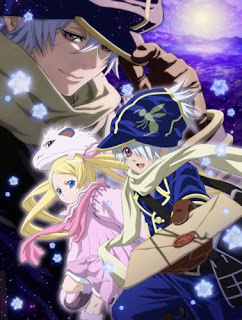 I've started watching some new series from the group which started in October. I usually have great expectations for the October series because it seems like some of my favorite series have started in October. This year, I'm not so sure about. I'm certainly watching fewer series now than I have in a long time, and that's at least partly because I'm not that excited about the new series. There are some that are drawing me in though.
Tegami Bachi (Letter Bee) is one of the series from this season that I really like .... one of those that are drawing me in. The first picture here is from Tegami Bachi. This series has got a unique plot and the setting and characters are pretty cool. Interestingly, the character in the first episode that I thought was the series' main character turns out not to be, but they continue to introduce interesting characters, so it's keeping me entertained and coming back for more so far.
Another series that's got me really intrigued this season is Tatakau Shishou: The Book of Bantorra. Yes, I know. The name is too long. This series has really kept me intrigued, and after seven episodes I still haven't figured out all of what's going on. I like

the characters, the music, and what I can figure out of the plot. In fact, one of the things that keeps pulling me in is trying to figure out what's going on. What I've got so far .... when people die their lives become books, which are saved in a library and protected by armed librarians. Which doesn't really do justice to describing what the series is like or what it's about. Maa. When I figure it out I'll let you know. I'm a little crazy with this series currently because for whatever reason, I have trouble with files from the only group that's subbing it. The timing on the audio is off which is hugely irritating. One episode I re-downloaded, and another I got through by jumping back and forth which would make the audio sync for a while. Irritating. Despite that, I keep watching Bantorra. The only thing I'm not really happy about in it is a fair amount of fan-service. Lots of breasts.
I've also started watching one called Winter Sonata that I find interesting. This one takes a significant amount of tolerance to watch. It's disconcerting because the voice actors are Korean. This anime series is based on a Korean live action show, and they've gotten the actors from that to reprise their roles as the voices in the anime. So the series is subtitled in Nihongo, and underneath those subtitles, the subbers have put English subtitles. Watching it, I find that I have a disconnect with the sound of the language, especially when you can read "arigatou" in Japanese, and "thank you" in English and the sound is completely different from either of those. Add to that Korean character names and no Japanese honorifics. Plus it looks as though a significant portion of the series may be a long flashback. I like to watch two episodes at a time when I'm watching new anime and each time I watch this one it takes the better part of those two episodes to get used to how it sounds. The story interest me though, so I keep watching it.
Three of the "new" series that I'm watching in this group are actually continuations of old series. Inuyasha, Darker than Black 2 and To Aru Kagaku no Railgun. Railgun is a spin-off of To Aru Majutsu no

Index. Two of the characters are from the original series and the plot follows their lives. Inuyasha picks up right where it left off and it's really great to be watching new Inuyasha again. Darker than Black picks up following Hei some time after the events of the last series. They've added new characters and the events that happened between the end of the first series and the start of this one are not clear yet. I'm also enjoying this one quite a bit.
I'm watching two other series in this batch, Kimi ni Todoke and Nyan Koi. Kimi ni Todoke is a fairly typical high school romance between a popular boy and an awkward, unpopular girl, but so far it's been very watchable. The characters are good, so we'll see if the plot manages to stay interesting enough to hold my attention. Nyan Koi ... I'm close to dropping. It's a harem anime, which is not my favorite genre. I thought it would be amusing because the male lead is cursed by cats, and the curse involves understanding and helping them, and he's also highly allergic to them. But it's not really keeping me interested.
Of course I'm still watching Bleach, Gintama and the new Fullmetal Alchemist. That covers all my current anime viewing. Just 11 series, which is amazing come to think of it. Many times I'm watching 20+ series at a time. I must be slacking off.
Posted by dai-ET at 5:15 PM