I've finished all the series I was watching that started in April this year or over the summer (except for Fullmetal Alchemist 2 which is more than 26 episodes), so I

thought I'd talk about them a little. The main theme for this set of series would have to be "Non-ending endings". I've talked about non-ending endings (NEE) before, so I won't go into that, but the majority of the series I've been watching "ended" this way, and not all of them were good NEE.

One of my favorites in this group of series turned out to be Higashi no Eden, despite being a NEE. They left it as an on-going story, but successfully tied up the current issues, which is the proper way for a NEE to be done. Another series in this group that did the same thing is Canaan. I'm not totally happy with the way Canaan ended actually, but it's a NEE done right. They tied up the major conflict and left the story to continue. So I also liked Canaan even though I wish they hadn't killed the girl with the deadly voice and her lover, and I wish the issues with Alphard had had a little different resolution.
From this season's shows I also liked Shangri-La very well, and it was not a NEE. Unique plot,

great music, amazingly unique characters who were fun, unusual and nice to look at, plus the series had a decent ending. More characters survived than I expected to survive. There were only a couple things I didn't like too much. One was Miko's token death. Yes, I know she/he wasn't the only character to die, but that death feels token-death-ish. I suppose it was necessary for the plot, but I didn't like it. The other thing that lost me at times was the carbon market dealings. Huh? Wakannai!! . . . were my thoughts after watching certain segments of several episodes. Still, this rates up there with my good series. Interestingly though, I didn't have a favorite character in this series.
The worst NEE of the season was PandoraHearts. I liked this series but they tied up exactly nothing. And I mean

nothing with a capital NOTHING. This series may rival Spiral as the least conclusive ending of all time. If there's no follow-up season, I'm going to forever wonder what the hell happened 100 years ago in Sabrie to screw up everyone's lives so badly. I liked this series right up until they forgot to finish it. It has some AWESOME music though, so I have to give it points for that.
Only a little behind PandoraHearts for bad NEE was 07-Ghost. I had high expectations for this series because I was collecting the manga before the series came out. Unfortunately, to me it seemed that the plot pace was too slow, and the "ending" can't really even pretend to being an ending. Again, without a follow-up season, this one will have been something of a waste of time to have watched ... even though it's quite beautiful to watch and the characters are pretty cool.
Another really bad NEE was Wolf and Spice second season. NO progress at all in the main plot line, although I will admit to some progress in the relationship between Lawrence and Horo. Still, it's going to take another season to 'end' the series, and the merchant talk is getting old enough that I'm not sure I can take another series.
Another series I liked that had a real ending was Tears to Tiara. I have something of a hard time 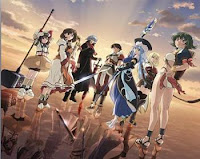 figuring out why I liked this one so much. There's nothing really special about it except the music. The music is awesome, but the characters are okay, plot line is okay, ending is okay. I just liked it. Maybe because Arawn didn't die. Wow. Come to think of it, that's pretty unusual. My favorite character in a series didn't die.
Two other series I watched this season include Phantom: Requiem for the Phantom and Valkyria Chronicles. I can't say that I really recommend either, and not just because in both cases my favorite character was killed. Phantom spent too much time killing off people and resurrecting them. Ein, Zwei, Scythe Master, Cal. These main characters were all killed, but not really, and then finally killed, except for Ein who was the only character to survive the series. So I spent much of the series wondering if a particular character they had just killed would appear later and not really be dead. I will say though that through a lot of the series I wasn't sure where they would go next with it, which is probably why I watched it to the end. Also the music again is really good.
Valkyria Chronicles I also watched through to the end, probably because they didn't kill off my favorite character (Faldio) until very late (ep 25 maybe?), so I kept watching in hopes that he might survive even though I really knew he wouldn't. This series played the emotional games very well, to the point where I consider it a "full box of kleenex" series. Of course, I tend to cry easily, but that's beside the point.
The only other series I watched this season was Sengoku Basara, and it also has a NEE. I liked the series, but geez! Another NEE. So basically I'm still waiting for all these series to conclude, but I did get some totally awesome music out of the season. I guess you can't have everything.
Posted by dai-ET at 5:06 AM