Lately I've been thinking about whether there's such a thing as a "perfect" anime series ... one that has no flaws at all, from my perspective. I mean, I've watched well over 200 series since I started watching anime. Surely in all that, there is at least one perfect anime series. So I'm going to see if I can come up with a definition for a perfect series and then see if I've watched any that fit the definition.

Let's see. What requirements would a series need to qualify as "perfect"?
1) No main character death. I'd love to say no character death at all, but that would rule out 99.9% of all anime (*laughing* and 54.2% of all statistics are made up on the spot). Anyway, it would rule out most anime, so I'll say no main character death and let some deaths slide by. However, token death will take a series right out of the running as far as I'm concerned.
2) Awesome music. The music usually makes or breaks the series, so a perfect series should have some pretty great music. It has to be at least good, and the better the music, the better the series.

3) A plot. The series needs to have some sort of a reasonable plot line going, not so convoluted that you don't know who's related to what and why, nor so non-existent that you get tired of people posing while you wait for something to happen.
4) Resolution of the plot. This one's tricky. There are times when a plot is totally resolved and I'm totally unhappy with the end result, so this condition is not simply resolution. It has to be an acceptable conclusion to various plot lines. There's bound to be a happy medium between finishing out the character's life 20 years in the future and not tying up any plot elements at all. Many, many, many series have trouble with this requirement.
5) Pretty is nice. The look of the series attracts me to it in the first place, and though it's just one element, it's still important. This factor is not a make-or-break one. As a rule I just tend to like pretty anime better.
6) Lack of gratuitous violence. I have no real problem with violence as such, but prefer that it's in some way necessary to the plot. And I don't necessarily see the point of spraying blood everywhere as often as possible. 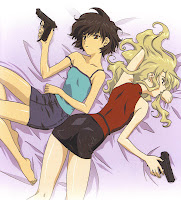 So what does that leave us with?

After consideration, here are some possibilities for the title of Perfect Anime Series:

Noir: This is a series that could justifiably be considered a "perfect" anime series in my opinion. It has really superb music and a great plot which is well resolved. And most importantly, the main characters survive the series. Yup, I have to put this one near the top of the list.
Serei no Moribito: This is another one that's high up 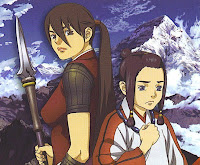 there on the "perfect" anime series list. The music is truly awesome and it has a great, unique plot which they wrap up very realistically. Much as I'd have liked Chagum to stay with Balsa, the Crown Prince has to go back to being a crown prince. So even though I might have wanted a slightly different ending, the conclusion was still very good ... which is the criterion. Also this series is very nice to look at. And everyone survives. Just a really good anime series.
Witchhunter Robin: This series also fits all the criteria, mostly. At least you're led to assume that

Robin and Amon survive the destruction at the end of the series, so there's no main character death and there's plot resolution. Plus the music is great, and the series is nice to look at.
Fruits Basket: This one is a little shaky on the plot resolution requirement. It's a non-ending ending, and although it's pretty good for this type, I may be stretching it a bit to call it a plot resolution. The rest of the qualifications are pretty solid though. Maybe not outstanding music, but good music.
Natsume Yuujinchou: This one is a little shaky on both the music and the plot criteria. The series music is okay, but nothing special. And there's not an extensive plot although there is a sort of under-plot of Natsume learning to interact with people. The series is gorgeous though and pretty well done overall.
Nodame Cantabile: The first season, not the second. This is a series that meets all the specifications, and does it with class. Of course most of the music from it is classical music, but it's awesome and that's the criterion. It has a good solid plot line which they resolve just perfectly. It's not a "pretty" anime, but not hard to watch. Basically a good solid series.

CardCaptor Sakura: Yup. CCS. It actually meets all my specifications. Hmmmm. Interesting that this was one of the first anime series I ever watched. I wonder if it set my expectations for later series and what I like and dislike?
Rurouni Kenshin: Again, one of the first series I ever watched, and again it meets all the criteria. There are deaths in this one (Shishio Makoto), but no major characters die. The plot is frequently intense, and each arc is resolved as it goes. The larger plot of what eventually happen 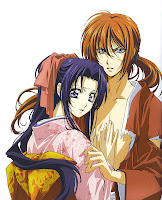 s to Kenshin and Kaoru isn't covered in the series, but for all that I still think it qualifies.
Huh! Surprisingly, there are more series that fit my prerequisites than I expected. Also surprisingly, not all of these "perfect" series are in my top 10 favorite series of all time. Which just goes to show that even with character death, iffy plot, so-so music and/or dangling plot lines, I can still like a series a lot.
Of course, there are a LOT of series that come close and maybe only miss one of the criteria. Here are some of the group of "runner's up".
Close-but-no-cigar series:
Cowboy Bebop: This was also an early series I watched, and it is still waaaaaay up there on my all-time-favorites list. Awesome music, decent plot, fun to watch. And they resolved the plot, but not in the way I would have wanted. They killed off a main character, who also happens to be my favorite character of this series - Spike. That takes them out of the 'perfect series' running, but it's still one of the best series around.
Macross Frontier: So close and yet so far.

This one fits all of the criteria except for Michel's token death. Decent plot, which is nicely resolved. Outstanding music. No more violence than necessary for a war series. But they killed Michel, and unlike Spike's death in Bebop, Michel's wasn't necessary. Senseless, token death. No way can this be a perfect series.
Heroic Age: This series actually does meet all the qualifications if you think about it. For me, what keeps this from that perfect series circle is that there were just too many continuous battle episodes for this to be a 'perfect' series. 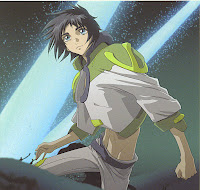 I got tired of battle after battle after battle.
Ergo Proxy: I liked this series. It meets most of the criteria, but the plot is almost overly complex. Even after watching the series multiple times I feel like I've missed nuances. I did like the way they finally tied up the plot though. And I like the music. The series was too dark, though. Not dark as in mood dark, although it was that too. The scenes were often so dark that I had to watch the series at night when it was dark to be able to see what was going on. So it was a good series, but not "perfect".
I could go on, but I guess I'll stop there for this post. Ja
Posted by dai-ET at 4:32 PM