I've talked about filler arcs before, and how much I generally dislike them. Filler arcs are the ultimate 'necessary evil'. If you don't want the series to diverge from the manga, you've got to kill time until the manga gets ahead of the series again. Usually the only good thing about a filler arc is that you know that they can't kill off any characters. The characters will have to come out of the filler arc not much different than they went in ... so that the plot can be resumed from the point where it left off. As a rule, filler arcs are tough to watch because they tend to be fairly insipid, and because they are interrupting a plot line that you really want to know what's going to happen next in. Especially in Bleach, I found these things to be true. (Don't get me started on the Bounto Arc).

All that being said, Bleach is currently doing a really entertaining filler arc. I was dismayed to know we were going to have another filler arc, but was steeling myself for the inevitable, when lo, and behold! A FUN filler arc. Considering the massive size of their cast and the unique setting, this arc has been a long time in coming. With all the material available to them, 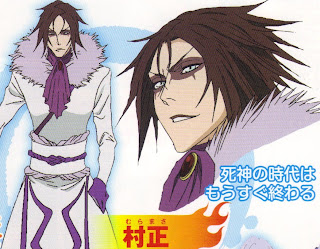 a Soul Society arc was just waiting to be done. So .... Meet Muramasa. Muramasa is a renegade zanpaktou. For those of you keeping up, that'll sort of make sense. If you don't watch Bleach, zanpaktou take a little explaining. Each shinigami has a zanpaktou. It is their sword, but it is also a part of their soul. As they grow and become more powerful as shinigami they develop a relationship with their zanpaktou, and also develop the ability to "release" their sword. The first level of release is 'shikai', and it causes the sword and owner to be more powerful, but the sword is essentially still a sword at this level. The ultimate release is called 'bankai', and at this level the zanpaktou has a personality and the wielder and sword are REALLY powerful.
In this arc, a renegade zanpaktou named Muramasa (fitting!) has killed his wielder, 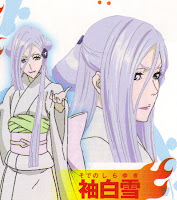 and has gained the ability to pull the zanpaktou souls free of their shinigami owners. The zanpaktou acquire humanoid forms and independence from their shinigami, and the shinigami are left with just a sword and pretty much no power. For the bankai-level Captains and Vice-captains, to say this comes as a shock would be a small understatement.

The fun thing about this arc is meeting the individual humanoid zanpaktou from each shinigami with bankai-level ability. Bleach has essentially almost doubled their already massive cast. 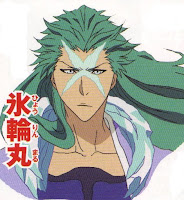 I've posted pictures here of a few of the freed zanpaktou. On the left above is the materialized, independent form of Kuchiki Rukia's zanpaktou. Her name is Sode no Shirayuki. And on the right is Hitsugaya Toushiro's zanpaktou, Hyourinmaru. Down below are two zanpaktou, Renji's Zabimaru and SoiFon's Tsuzumebachi. They're all too cool, and all have personalities that seem not to reflect their wielder's very much, despite the zanpaktous always having been considered part of their respective shinigani's souls.
Muramasa has plans to free all the zanpaktou from their bondage and destroy Soul Society and the

cruel shinigami masters who have kept their zanpaktou in slavery for so long. Currently, battles are going on between shinigmai and zanpaktou. I'm looking forward to where this goes and to meeting each zanpaktopu and watching the struggles between them and their individual shinigami counterparts. I'm seriously hoping that they'll run this filler arc for a while. I mean if they can do the Bounto for 50 episodes, why can't they do a good arc for that long?
Along with the struggles between the shinigami and their respective zanpaktou, the arc is also having fun with Ichigo's unique position. His zanpaktou is 'freed' just like everyone else's, but unlike everyone else this doesn't leave Ichigo powerless. Ichigo has a couple of things going for him still. One is the fact that he's human, not just a shinigami. Another is the odd fact that he has a half-Hollow soul. If any one person should have a multiple personality disorder, it's Ichigo. Luckily, his good-guy, human heart always manages to stay dominant, but his really powerful Hollow side has saved his bacon a good number of times. Probably you have to be watching this anime to follow all that. Let's just say that Ichigo has done pretty much everything the hardest way possible and often somewhat backward, so he's ended up with some 'traits' that have been both detrimental and totally necessary and useful along the way. A lot of Ichigo's power comes from the dark side of himself, which he manages to balance most of the time. In this arc, they have fun exploring Ichigo's other personality. Muramasa is trying to figure Ichigo out, totally unaware that Ichigo will probably be his ultimate downfall.
I never thought I'd say that I hope a Bleach filler arc lasts a while, but I do hope so with this one. It's pretty fun.
Posted by dai-ET at 12:55 PM