Lately I've been watching some series that didn't really hook me hard in the beginning, but the plot and characters are interesting enough to keep me watching. Valkyria Chronicles is one of these series, and it's been something of a surprise to me in several ways. For one thing, as a rule I'm not that fond of series that are derived from games. They tend to be disjointed or derivative or require you to have played the game to know the back story and inter-relationships between the characters. So I wasn't expecting much from Valkyria. I began watching it for my usual reason .... I liked the way the characters looked.
Another reason I wasn't expecting much is that it's a war series. *laughing* Hai, hai. With my penchant for liking historically-based anime, I'm bound to watch war series. Human history is defined by periods of war and events are described in relation to it. We call something "post-WWII" or "pre-Civil War", etc. Humanity is described as a war-like race and we've managed to saturate our history with blood. We're still doing it. In my more delusional moments I like to think that we can eventually evolve beyond it. Oops, got a little philosophical there. Anyway, the problem with war- 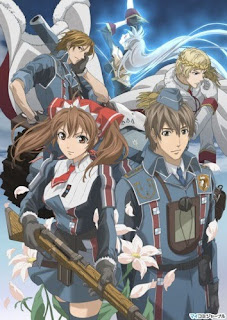 series, is that they are pretty much guaranteed to kill off characters. So I go into them expecting less over-all survival. Unfortunately I never seem to get the hang of not getting involved in the characters lives.
So, along the way in watching Valkyria, I've been slowly drawn in by the plot. On the surface it's fairly typical, with a nice love triangle going among the three main characters, and various side-characters interacting more or less happily, and a sub-plot that is hinted at in the OP, but not developed much yet (which in itself is a little scary, given that we're on episode 20 of 26. They may never really develop the sub-plot, which would be a shame.)
In episode 17 they kill off Isara, one of the main characters. I'm not sure yet whether this is the start of character decimation, or if she will be the series token death. Since everyone who's read my blog knows how I feel about token death, I won't go there. Where I want to go with this blog is this: WTF is the point of rubbing our noses in the death for TWO ENTIRE EPISODES!!?! Yes, the up-coming death was obvious. Episode 16 was a warm and happy episode showcasing the growing love relationship between Isara and Ramal. You just knew one of them would die, and sure enough in ep 17 Isara is killed. Take my advice. If you're watching this series, skip episodes 18 and 19, and go immediately to where the plot resumes in episode 20. 18 and 19 are excruciating, agonizing detail of how people live on and deal with the death of everyone's favorite. Of course Isara is the most non-threatening, lovable character in the series, so the whole cast is filled with guilt and despair, which the creators drag us through for two episodes. It took me half a box of Kleenex to make it to ep 20. 'K'sou. Was that really necessary? Her death was bad enough. Why waste two episodes of plot time on it?
*exasperated sigh* Given how much the Japanese like to kill off their characters, I'm going to have to accept that characters die, and stop ranting about it in this blog. Actually, that's not it. It's not that I can't accept that characters die. I just don't get why they have to die in the worst possible way. Yes, I know horrible, senseless death is a part of life. Maybe I want my anime to be a little less life-like. Somewhere there's got to be a happy medium. I'm not particularly fond of anime that's all sweetness and light fluff, with nothing more pressing than the next school day and confessing to one's boyfriend/girlfriend. Still somewhere between drag-everyone-through-anguish and don't-have-a-plot-to-speak-of, there's got to be reasonable anime. Right? I'm sure I'll be able to think of plenty of examples .... later when I'm less frustrated.
Posted by dai-ET at 2:13 PM