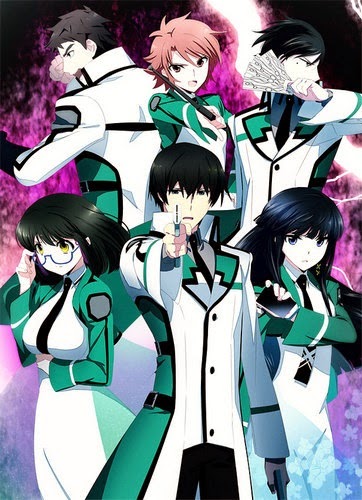 Mahouka Koukou no Rettousei, also called The Irregular at Magic High School, or The Poor-performing at Magic High School, is obviously about a high school full of students who can perform magic.  The classes and student are split into those who are exceptional at using magic (blooms) and those who can barely use magic at all (weeds).  The story follows a brother and sister named Shiba Tatsuya and Shiba Miyuki.  Miyuki is an exceptional magic user, and of course, Tatsuya is a weed. 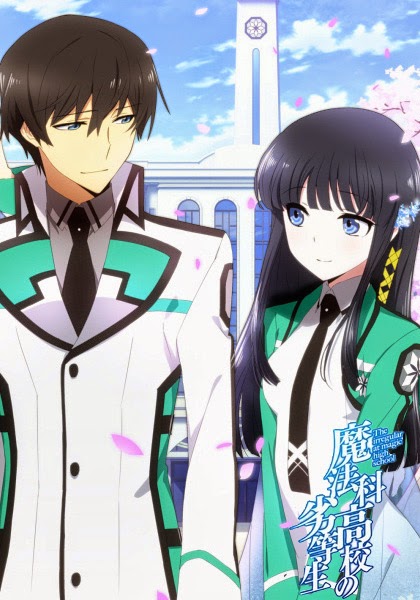 As it turns out though, Tatsuya isn’t really inept at magic.  His magic is just so advanced and different from the usual magic that he performs poorly on standardized magic tests.  Plus in addition to having pretty amazing magic of his own, he’s a wizard at programming, especially programming the CAD devices which are used by magic users to focus and amplify their magic spells.  They also hint along the way that Tatsuya is not quite human, as he can reset himself when injured and has very few human emotions, except for his feelings for Miyuki.

The series is composed of three story arcs.  The first arc deals with the siblings entering the school and meeting their classmates.  It also deals with the whole blooms/weeds things and the inter-school prejudices, while introducing the cast and setting the stage.  Tatsuya is quickly found to be much more than he seems and he and Miyuki quickly become involved in the school, with Miyuki becoming a member of the Student Council and Tatsuya becoming a member of the Student Disciplinary Committee. 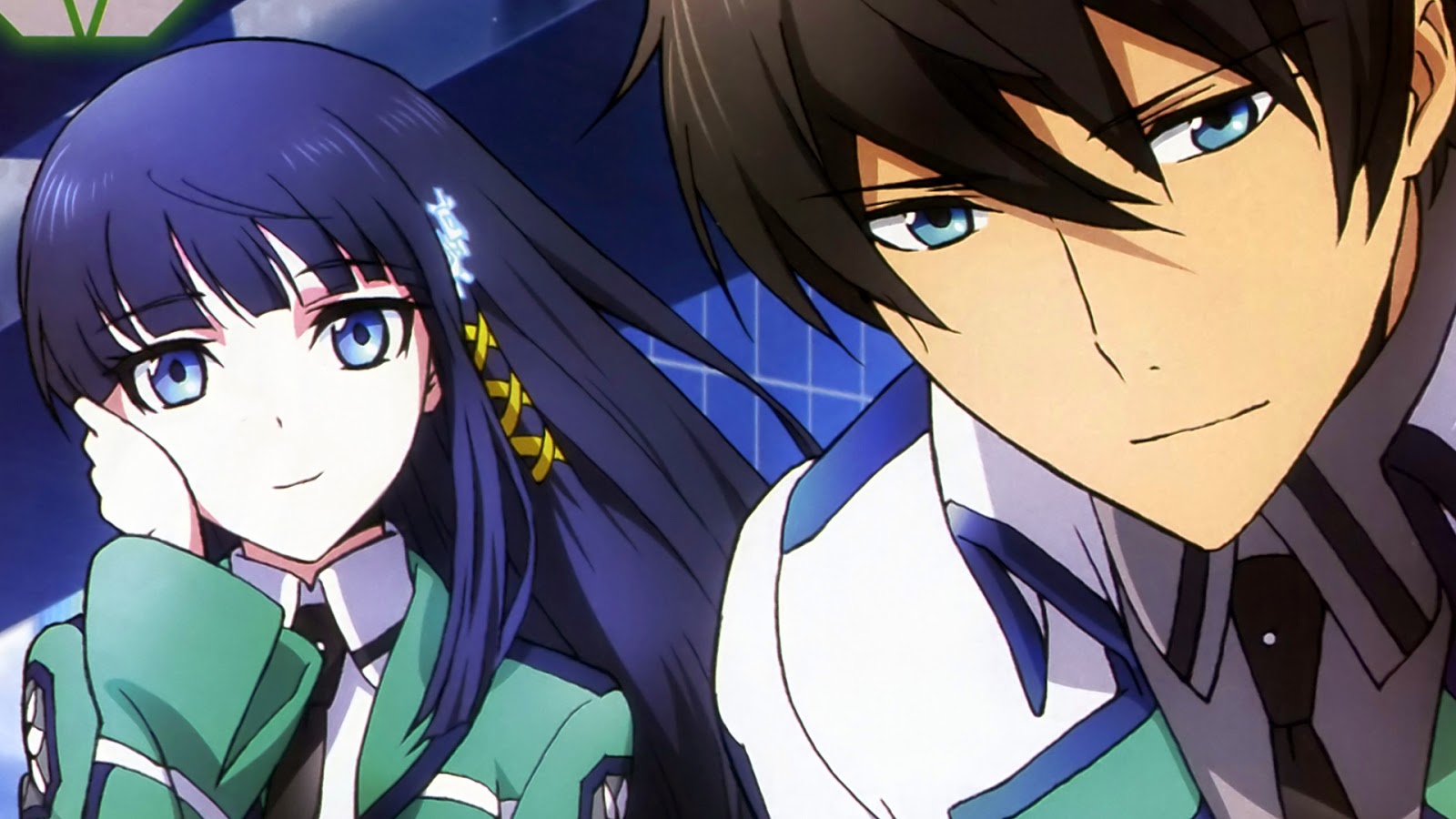 The second arc covers a multi-school magic competition and not only do both Miyuki and Tatsuya compete in the various “games”, but Tatsuya ends up doing the programming for most of their school’s students’ CADs.  In the end he also foils a lot of plots intended to keep their school from winning the competition, which they do win.  In the final battle game, Tatsuya is accidentally killed by the top student of one of the other magic schools, who also happens to be the next head of one of the most powerful of the Ten Master Clans.  Tatsuya uses his most powerful magic skill, and regenerates himself instantly, so no one knows he should be dead, although most everyone is amazed he didn’t die. 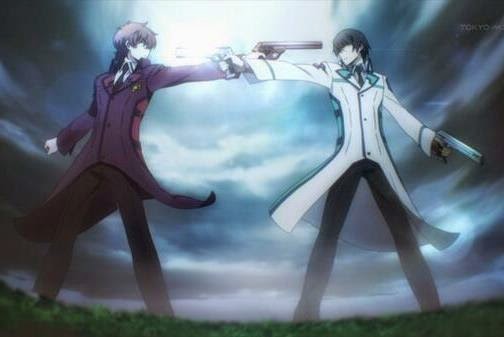 The final arc involves an attack on the magic users during another competition between the magic schools.  During this final arc, Tatsuya, Miyuki and the magic-using students demonstrate clearly that magic-using warfare beats normal, mechanical warfare all hollow.  In addition, Tatsuya’s spell which allows him to reset himself, allows him to reset others also, both people and things, if he gets to them within 24 hours of the damage.   He saves a couple of students’ lives this way. 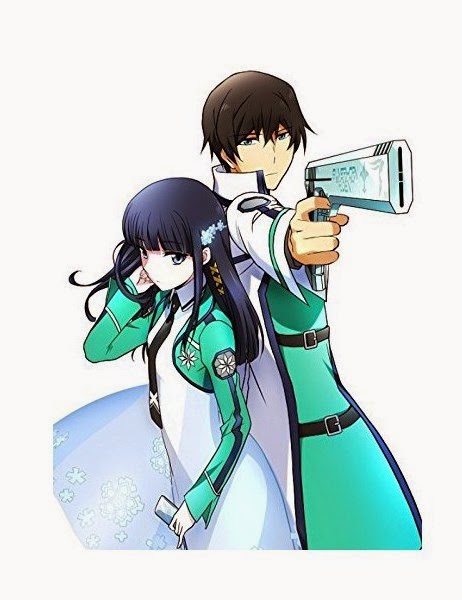 I found two things about this series irritating:  one was the brother-sister love issue.  Miyuki is head over heels in love with Tatsuya and doesn’t bother to hide it.  It’s almost sickening early on but luckily they tone it down a bit as they go.  Either that or I got used to it.  The other thing was the series creators need to explain every magic spell in detail.  The characters all do a post-mortem discussion of each spell and how it worked along the way.  That little series quirk almost made me stop watching the series.


Despite those two issues, the story was interesting enough to keep me watching.  Or maybe I kept watching to try to figure out exactly what Tatsuya is.  His family is not very happy with his existence and tends to ignore him for the most part, except for Miyuki who worships him.  He is also a secret operative for a special magic-using section of the JSDF.   Plus his magic and computer abilities often seem more than human. 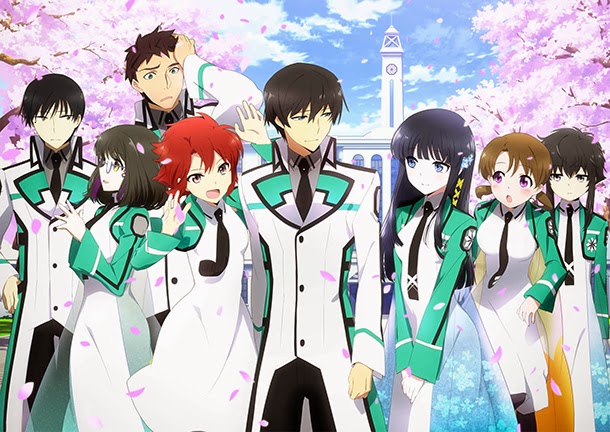 I ended up not getting all (any) of my questions answered.  Like why does Miyuki control Tatsuya’s powers?  Before the final battle, she releases the limiter on his powers. So, the series ended abruptly with a lot of things up in the air, including with me having the same question I watched the series all the way through in order to find the answer to:  Who or What is Tatsuya?  Still . . .  I’m glad I watched it, although I probably won’t watch another season if they continue it.
Posted by dai-ET at 9:01 AM