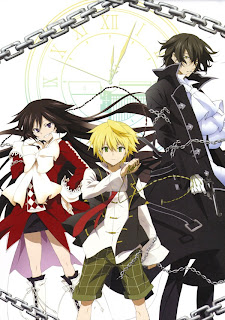 It’s always hard to decide what series to post about next, unless I have one that’s really making (or has made) an impression on me.  I’m getting close to finishing up some short series so I’ll probably post about them in the near future.  In the meantime I’m falling back on older series again.  Today I thought I’d post about PandoraHearts.

PandoraHearts is about a rich kid named Oz Bessarius (or Vessalius).  Oz has it all, a huge mansion and servants, a boy his age named Gilbert who is his best friend as well as his servant, and a younger sister who worships him.  In the first episode, during the rite celebrating his coming of age ceremony at 15 years old, everything goes wrong.  For no known reason, weird people in robes show up, and attack him.  In trying to defend himself, he accidentally kills Gilbert, and Oz himself is thrown into Hell, which is known as the Abyss.

Oz wanders around the Abyss for a bit and finds other entities, including a young girl named Alice who is a “chain”.  Chains are entities from the Abyss that try to make pacts with humans in order to access the human world.  They also have powerful abilities when attached to a human, but the bad news is that the chain uses up the human’s life force each time it acts.

Oz discovers that he can leave the Abyss if he makes a pact with a “Chain” and he decides to go for it and makes a pact with Alice.  In their pact, Oz and Alice agree to find out why Oz was thrown into the Abyss and to find Alice’s past, which she has no recollection of.  Although Alice is a young girl in appearance, she becomes a frigging huge, powerful, black rabbit in her chain form.  She and Oz together return to the human world. 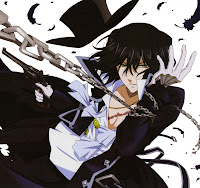 Oz discovers that a lot of time has passed in the real world.  He did not actually manage to kill Gilbert, and Gilbert has become a man who goes by the name of Raven.  Raven has been working with an organization named Pandora, and especially a man named Break, and they were about to venture into the Abyss to retrieve Oz when Oz and Alice manage to return on their own. 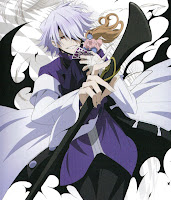 The rest of the series is basically Oz, Alice and Raven trying to find Alice’s past and the reason for Oz’s banishment to the Abyss.  They are helped or hindered along the way by various members of Pandora, by Break and his chain, by Raven’s seriously insane brother Vincent and Vincent’s servant Echo, and by Oz’s disappeared ancestor, Jack Bessarius.

The things I loved about this anime series:  It’s pretty.  It has a unique plot which is unique enough to occasionally be hard to figure out where it’s going.  The music is waaaaaaaay beyond awesome.  The two soundtracks from it are high up on my all time favorite music list. 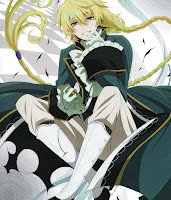 The thing I hated about it, and that caused it to not be anywhere near the running for one of my favorite series:  No ending!  Not even a suggestion of an ending.  They spend the whole series working up to the fact that everything that’s happening is related to a massive Tragedy of Sabrié, which occurred 100 years ago (and yet which somehow Vincent and Gilbert lived through).  And then they end the series without ever saying what happened in the Tragedy of Sabrié.  You get hints of Alice’s past, in which she knew and interacted with Jack Bessarius, and hints about the Tragedy, but no explanations.  In addition, very late in the series Oz discovers that not only does his father despise him and consider him “filthy”, it was probably his father who threw him into the Abyss.  Again, no background, no explanation of what’s going on there. 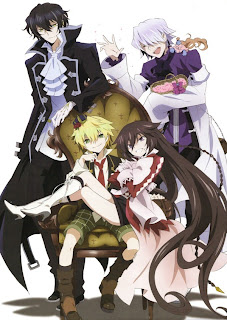 This is a series where the ending really did ruin the series.  It’s near the top of my all time worst non-ending endings.  If they had done a second season and explained more, it would have been worth watching.  As it is, I don’t recommend it, unless you just like pretty. The story is interesting, the characters are interesting, but they totally leave you hanging with nowhere to go but to buy the manga.   Get the soundtracks though.  They’re wonderful.