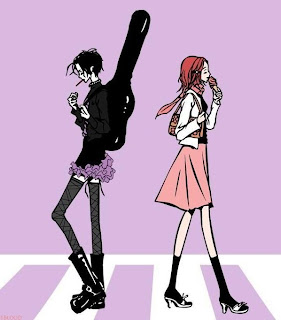 NANA is a slice of life anime, covering ordinary events and ordinary people.  And by that I mean, no magic, no transforming, no futuristic society or feudalistic society.  Just normal, everyday life.

The story line of Nana follows two young women, both of whom are named Nana.  Nana Komatsu is a normal, everyday girl who has a tendency to jump into romantic relationships without much thought.  Nana Osaki is a guitarist/singer, who is very independent and has few friends, let alone relationships.  The two Nana’s meet on the train on the way to Tokyo, as each is setting out to start a new life.  Nana Komatsu is going to Tokyo to join her boyfriend; Nana Osaki is going to find her friends with plans to start a new Rock ‘n Roll band.    The Nana's interact on the train because it is delayed by snow.  Once it arrives in Tokyo, they go their separate ways.

Coincidentally, when separately searching for a place to live, they both end up looking at the same apartment.  They decide that they are fated to share it, since the number on it is 707, nana-maru-nana.  And the adventures begin as the Nana's become best friends.  Nana Osaki refers to Nana Komatsu as Hachi or Hachiko, because Nana K. is so much like a little puppy at times.  For the rest of this post, I’ll refer to her as Hachiko also to make things less confusing.

The Nana's come to like each other very much as best friends and become embroiled in each other’s lives and loves.  This anime is very much about their lives and loves.   Nana’s original four-member band back home broke up when the lead guitarist, Ren, (who was also Nana’s lover), left them to join a band called Trapnest.  Trapnest is a famous band that has made it in the big time world of Rock ‘n Roll.  Nana comes to Tokyo and meets with her 3 friends.  Together they find another guitarist and form a band called the Black Stones, or BLAST for short.  Hachiko becomes their number one fan and supporter. 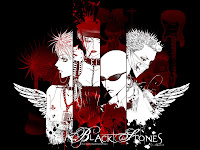 Hachiko, for her part, continues to jump between relationships, especially after she finds out her boyfriend is cheating on her.  She has an affair with a member of Trapnest, Takumi, who she has had a crush on since the band was formed.  Because he's gone so much with the band, after their one night affair Hachiko dumps him when she feels herself falling in love with a member of Black Stones, Nobu.   Hachiko is just a fling for Takumi, but he doesn’t take well to being dumped and comes back around, just when Hachiko discovers that she’s pregnant, and doesn’t know whether Takumi or Nobu is the father.

Takumi, who is established in his career, steps up and offers to marry Nana, and Nobu, who is just beginning and doesn’t yet have a career, steps back.  Through a group of emotionally charged series episodes, Hachiko decides to keep the baby and marry Takumi.  This series of events splits the Nana’s apart, since Nana dislikes Takumi immensely and feels like he’s stolen Hachiko from her and the Black Stones. 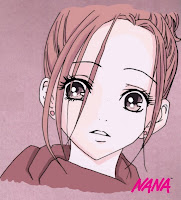 While the Hachiko/Takumi story is unfolding, Nana and the Black Stones are struggling to start their career.  Nana and Ren have gotten back together secretly, but Nana is having blackout episodes, depression episodes and hyperventilation episodes.   Basically she’s emotionally pretty unstable, but Ren and her band and Hachiko all love her and do their best to help her. 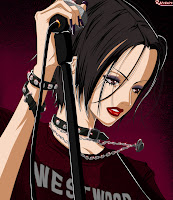 As usual, I’ve skipped all the side characters and their individual stories, and unlike a lot of anime series, they develop these side characters personalities and stories without killing them off in the next episode.   The whole story here is much more involved than I’ve included in this post.

Although in general “slice of life” series are among my least favorite genres, I did enjoy this series.  For one thing the music is waaaaaaaaaay beyond AWESOME.   As you can imagine, with two bands and two female lead singers, there is just not enough good I can say about the music.  The singles are sooooooo amazing. 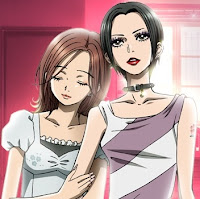 The series ending was a little cryptic for me.  I suppose they meant to give hints about things they didn’t have time to cover in the series, but they never do explain what happened with Nana O., and why she isn’t at the final episode meeting.  I like my endings a little more straight forward.  Other than that, it’s a very watchable series.   I was amused to find when I bought the American version that it was sold in the adult section rather than the anime section, I suppose because of the sex.   A lot of prime time TV has more sex than this series though, so that’s just silly.
Posted by dai-ET at 1:19 PM