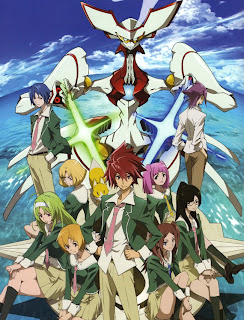 I’m still waiting for all the current anime series to end before I post about them, so today I picked another older series, although this one isn’t all that old.  Today I’m going to talk about Star Driver.

Star Driver is a mecha series.  Let's see . . . How to describe the background of this series?    The series takes place on a gorgeous tropical island which harbors a secret, an old underground base which was probably created by aliens at an undefined point in the distant past.  The base contains big, humanoid figures referred to as cybodies which can be driven by humans with the correct will to do it in the early phase, or in the later phases by humans that have inherited a symbol on their body which is passed down through families, but can be transferred to another.

When the cybodies are driven however they are confined in a space/time warp called zero time, which freezes time in the real world and in which everything occurs dealing with the driven cybody.  The cybodies are confined and sealed this way by four shrine maidens/priestesses, the Northern Miko, Southern Miko, Eastern Miko and Western Miko.  The base and the cybodies are being run and experimented with by a secret society calling itself Glittering Star (Kiraboshi).  Kiraboshi’s main purposes are to determine how to elevate the cybodies and drivers through multiple “Phases” and to break the four shrine maiden’s seals and by doing so to release the cybodies from zero time. 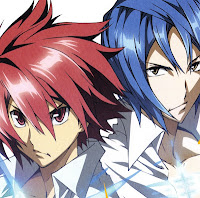 That’s the background, which it took a while to figure out as they’re not forthcoming with it.  Early on they just have characters wandering around saluting each other (kiraboshi!) and driving cybodies in zero time and trying to break miko seals.

Into this background comes Tsunashi Takuto, the main character.  Takuto is an out-going and lovable high school student, and shortly after arriving on the island and even before starting school, he becomes fast friends with the two other main characters, Agemaki Wako and Shindou Sugata.  Wako is the Southern shrine maiden and she has been promised in marriage to Shindou, basically from birth.  Of course, during the series  Wako and Takuto fall for each other, even though Wako also loves Shindou, and Takuto and Shindou are best friends.  It’s the eternal triangle, but it’s actually handled without too much angst and without the two main male characters spending any time trying to kill each other.

Takuto also has another role on the island.  He is the “Galactic Pretty Boy”, Ginga Bishonen, who drives a cybody named Tauburn.  Takuto /Tauburn are basically the cybody police force.  They work to prevent Kiraboshi from achieving its purpose, and to protect the mikos and their seals.  Thus from Takuto’s arrival and throughout the series, various members of Kiraboshi drag Takuto into zero time and attempt to kill him and destroy Tauburn.   Each time he’s dragged into zero time, so are Wako and Shindou.  Shindou also turns out to have inherited the symbol and powers of the most powerful cybody, Samehk.   He uses his abilities in aid of Takuto periodically and toward the end of the series, Shindou joins Kiraboshi.

During the series you find out that one of Kiraboshi, their leader, is in fact Takuto's estranged father who abandoned Takuto and his mother to pursue power.  In the final battle scenes you discover in addition that he’s a megalomaniac who will sacrifice everything and everyone to  gain his primary desire, ruling all of creation.  Two of the shrine maiden seals are already broken by this point in the series and now he breaks the seal of the third priestess, the Eastern Maiden, which allows Shindou’s ginormous, powerful cybody Samehk to be released.  He then plans to use Samehk to destroy all life on earth.  Wako’s seal is all that’s stopping him from breaking zero time.  Takuto, with the help of the rest of Kiraboshi, stops his father and rescues Wako.  Takuto and Wako then realize that Shindou joined Kiraboshi in order to finally seal Samehk with Shindou inside.  Takuto refuses to let Shindou go and breaks Wako’s seal himself, releasing Samehk from zero time.  Then Takuto defeats and destroys Samehk before it can destroy the earth, and rescues his friend Shindou in the process.  So the series ends with everyone surviving, the cybodies essentially all destroyed and  Takuto, Shindou and Wako living happily ever after.  Or at least as happily as can be expected of a love triangle. 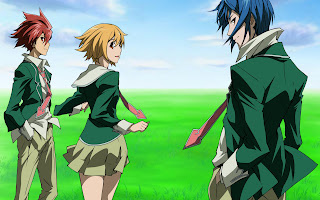 Once again this synopsis leaves out so much.  There are a lot of amazing characters and side stories in this series and you get to know them as the series progresses.  For me the series only had one major flaw, the transformations.  I got tired of watching Takuto transform into Ginga Bishonen after awhile.  Still, the series doesn’t lose itself and its plot in favor of spotlighting the mecha, so the transformations are bearable.  The music is good, the characters and anime style are wonderful and the story line is pretty unique for a mecha series.  It’s definitely a series worth watching.
Posted by dai-ET at 12:14 PM