I just love April and October. 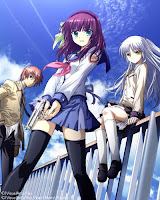 That's when most of the new anime series start, and it's always fun to see what's going to be out there. Especially since I finished most of the series I was watching, I've been looking forward to some new ones. So I figured I'd do a short post about the new series that began in April and that I've started watching. I'll start with two that I really didn't expect to enjoy, but I am so far.

Angel Beats!: The picture to the left is from Angel Beats! This series has a really unique premise and plot. High school age kids who die, end up in a high school (which has got to be fairly depressing anyway). If they behave and accept everything, they disappear ... presumably passing on to that great heaven in the sky. However, if they rebel and act out and fight against the system (God), they remain in the high school. So the plot follows a group of kids who are not ready to accept what fate has handed them and are fighting against the "Angel", who is apparently the system's way of getting kids to toe the line. It's a rather unique plot, and has some excellent music, so I'll continue to see where it goes. I think it's a short one anyway, maybe 13 episodes.

Kaichou wa Maid-sama: I seriously didn't expect to enjoy this one. I 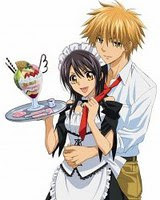 t's a high school romance story between two mismatched kids, which is a plot line that's roughly older than I am. But this series is FUNNY!! Occasionally, it's hysterically funny. I catch myself laughing out loud while watching it, when the plot takes an unexpected turn. And they're rather good at throwing in the unexpected. The hard-assed, male-disliking Student Council President of a school with a less-than-stellar reputation has a part-time job in a Maid Cafe. It pays well and her family is poor, but she desperately wants to keep it a secret from everyone at school. And so it goes. Doesn't sound like much, but it's totally enjoyable to watch.

Hakuouki Shisengumi Kitan: I pretty much had to watch this one, given my fondness for historically

based anime and my fondness for vampires. It's okay so far. It was adapted from a game, which is really up there among my least favorite types of series. Plus it's a otome game, like a love adventure game or dating sim. So I both wanted to see it, for it's possible plot lines, and dreaded seeing it, considering it's origins. I will say that the verdict is still out. It's a reverse harem, which I don't mind as much as a regular harem, but without a decent plot, this one may not be worth watching. I'll have to watch some more and see where it goes.

Uragiri wa Boku no Namae wo Shitteiru: I've been looking forward to this on

e arriving since it's an anime adaptation of a manga I've been collecting, and the manga it comes from is gorgeous. As you can see from this picture, it looks like the series will have that in common with the manga. It is ... pretty damn gorgeous. I'm not sure about the plot because I haven't read the manga, I'm just collecting it. So far a young orphan guy with BIG, just emerging, mental powers discovers he's not really an orphan ('family' conveniently appears around the time his powers do) and he's being protected by a guy who seems to be more demon than human. Now we'll just see if the plot makes it worth following as well as just watching it for how pretty it is.

of a better word. However, spying is the least of their talents. These four, shown in the picture to the left, each possess an extrasensory power. The powers are quite impressive, and together the four work to achieve whatever their higher-ups tell them to achieve. I'll be interested to see if the plot goes deeper and where it takes the series. It's basically fun to watch right now.

Saraiya Goyou (House of Five Leaves) has an animation style that reminds me of Samurai Champloo, so it's not pretty. Something about the story attracts me and keeps me watching though. And I love the OP theme song. It's awesome. The story is about a down and out samurai who gets entangled with a group who makes their living by kidnapping people and holding them for ransom. Probably one of the attractions for me is the time it's set in, but also, although it's just being hinted at, I think the plot goes way deeper than the simplified overview I just gave, which is coincidentally all the poor samurai knows too at this point.

So those are the new series I've started following. And of course I'm still watching Bleach, Durarara (awesome!) and Fullmetal Alchemist (waaay beyond awesome), plus a few random things here and there. Basically I'm still watching enough to keep me entertained.
Posted by dai-ET at 2:31 PM