I am soooo overdue making a post on this blog. Time really gets away from me. That and I haven't been watching all that many series lately. Compared to the number of series I used to watch, I've really cut down. Of course, that doesn't mean I'm not watching a lot of series. It just means I'm not watching as many as I used to. The series that started in October were okay, but there wasn't a really outstanding series in the bunch.
I did really enjoy watching the new season of 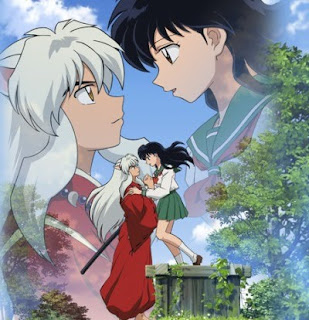 Inuyasha. It was incredibly nostalgic and fun to watch Inuyasha again. Plus it was really beautiful, with the same character style, etc. I will say that this season of Inuyasha was really different from the first 165 episodes in a couple of ways though. For one thing, in all the rest of Inuyasha they never killed any characters, even Kikyou . . . who was dead to begin with come to think of it. In this season, it seems as though they killed off around half the cast. None of the main characters die, but a good portion of the secondary cast does, including Kikyou as well as all Naraku's annoying incarnations. Another difference is the pace of this new season. The whole 165 episodes of the original Inuyasha was slow moving and pretty unchanging. Gather the Shikon fragments, lose them to Naraku and battle demons along the way. And I suppose there was some slow evolution of Inuyasha and his sword. On the other hand, this last 26 ep series was extremely fast paced, with characters dying and events happening rapidly. All in all it was entirely enjoyable, and managed to tie up everything with a happily ever after ending.
Of the October series, I also enjoyed watching Tegami Bachi, although the "end" of the series wasn't an end but a cliffhanger for the second season. I'm looking forward to watching more of it though . . . hopefully soon. Tatakau Shisho: the Book of Bantorra was another series I watched that kept me interested all the way through. Mostly that's because I was trying to figure out what was going on, which took essentially the whole series. Unfortunately I didn't like the end, or the number of main characters they killed off, so it won't go on my list of good series, despite having quite a unique plot and good music.
Another series from the October group that I really enjoyed was ToAru Kagaku no Railgun. This 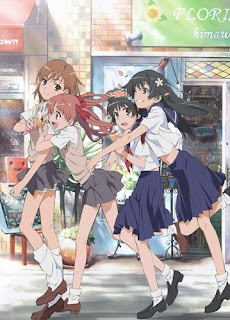 series surprised me because it's not the type of series that I'm usually attracted to. Plus it's a spin off of ToAru Majutsu no Index, which wasn't one of my favorite series either. But Railgun not only held my attention, it had a good plot line which it tied up very satisfyingly. Railgun has essentially no male characters, which is why I say it's not the type of series I'm usually attracted to. And it follows 4 middle school girls about their daily life. Also not something I usually enjoy watching. But of course these aren't just any middle school girls. *laughing* This is Japanese Anime after all. No, no normal middle school girl falling through a time/space warp. This is 4 girls who go to schools for people with powers (scientific vs magic powers ... see ToAru Majutsu no Index for the explanation of the difference. I confess I didn't really get it). One girl controls electricity. One is a telekinetic telepath. One has flowers growing out of her head ... not sure of her skill but she's a computer whiz. And the fourth girl has no powers. The series starts out as random, everyday-life-type episodes and just when you think that's all the series is going to be, they throw in an under-lying plot line that ties up random things and makes the series fun. As I said, I was surprised to find myself enjoying the series.
I guess I'll quit here for now. Maybe if I write shorter posts I'll be more inclined to do them more frequently. Worth a try.
Posted by dai-ET at 10:27 AM