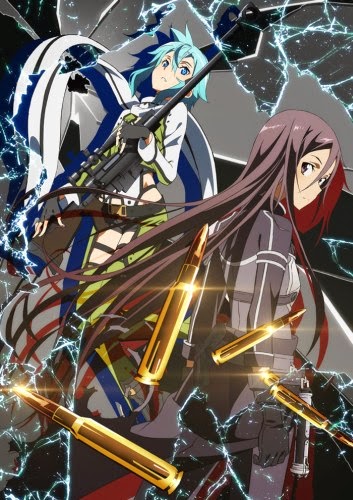 This season picks up where the last season left off, with Kirito, Asuna, Kirito’s sister, Suguha, and all their various friends from both Aincrad and Elfhame Online, including Yui, Liz, Silica and Klein.  All these guys are continuing with their lives in the real world and also in the virtual world, continuing to play the virtual reality (VR) game of Elfhame Online with their full-dive gear whenever they have time. 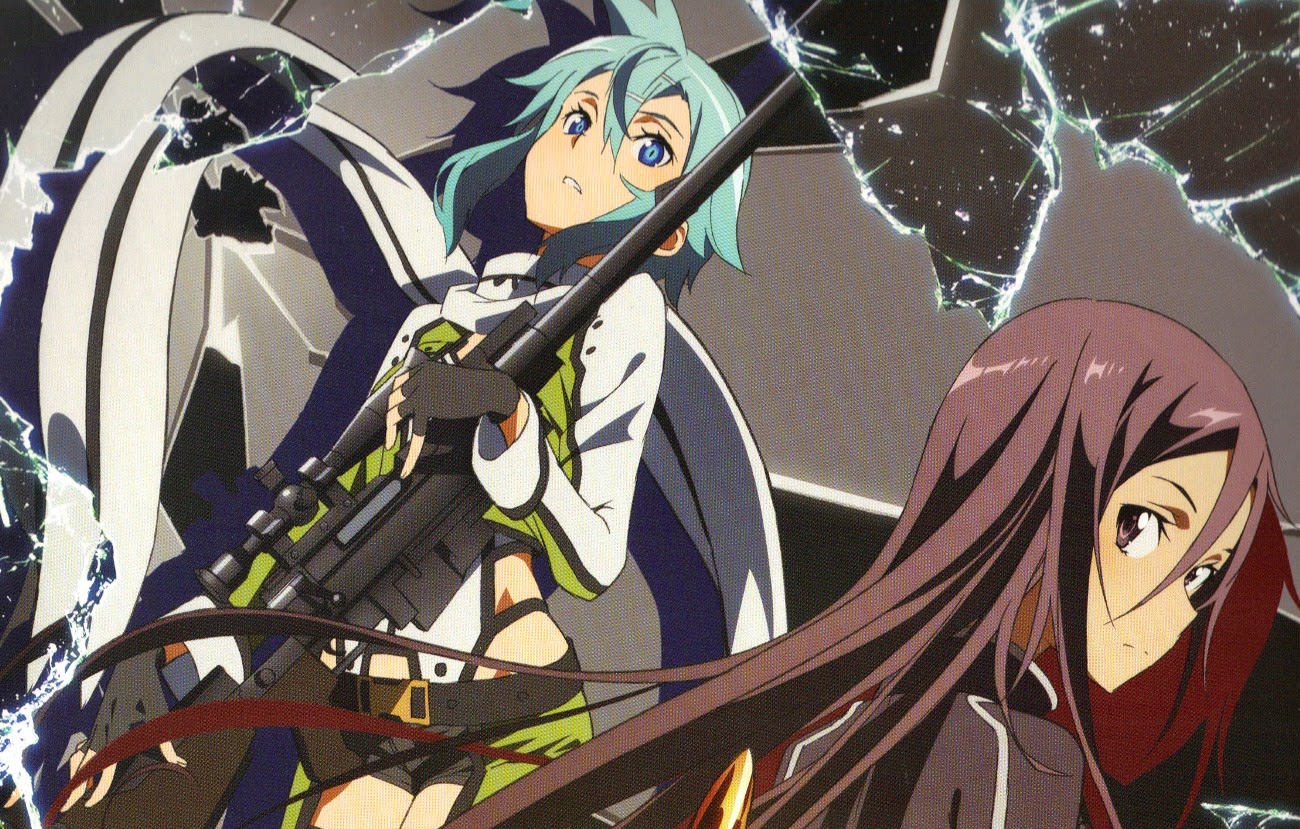 The series begins by adding another VR game, Gun Gale Online or GGO.  GGO is mostly played by males because it is a shoot and kill game.  Everyone is very fixated on various types of guns and shooting skills, and although I think you can hunt monsters in the game, most people hunt each other.  There is a big yearly tournament in GGO where the 30 top shooters are dropped into a VR world and the last person left alive is the winner.  This tournament is called the Ballet of Bullets, and everyone who plays GGO tries to qualify for it. 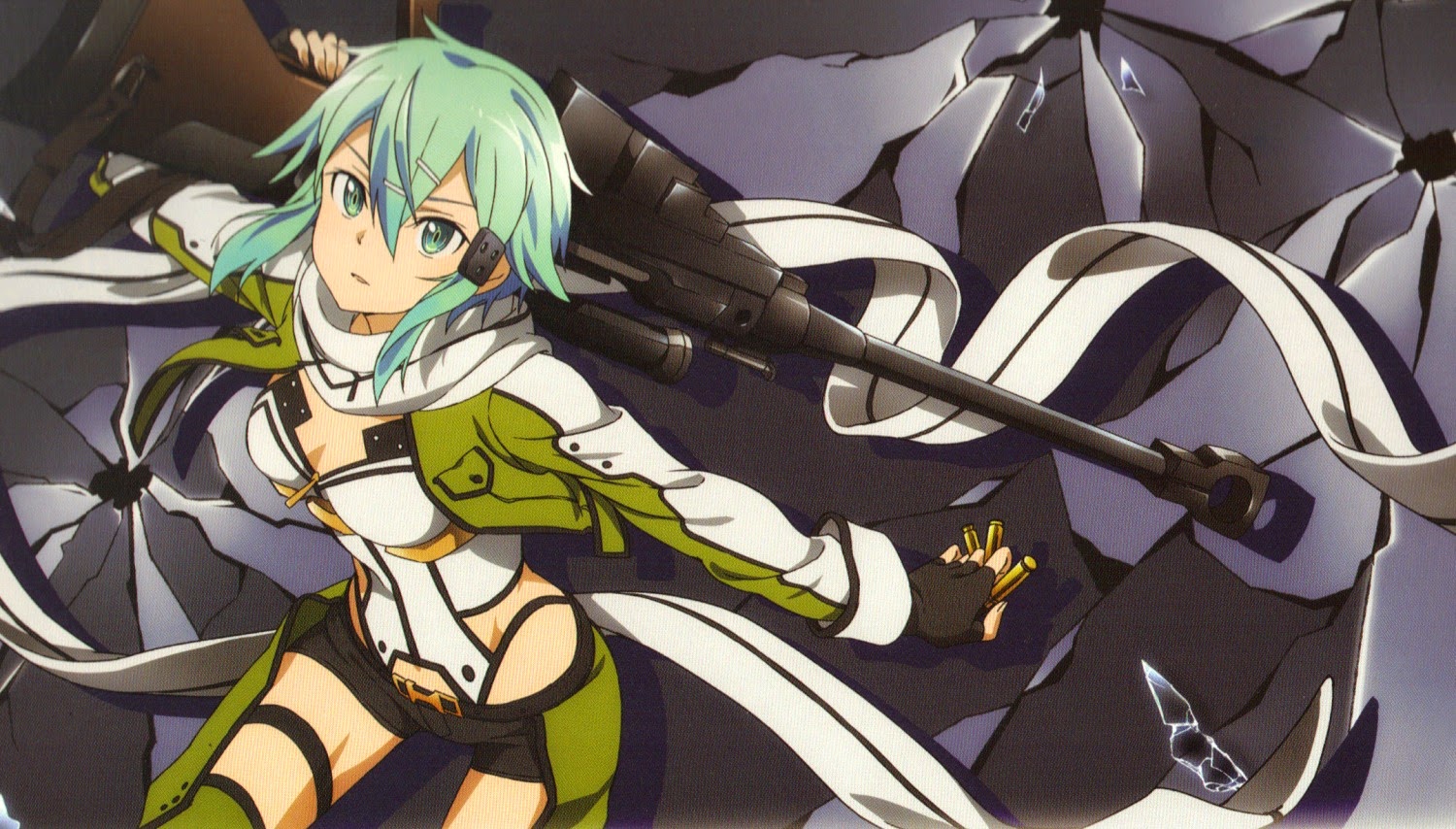 The main character added for this story arc is Sinon.  Sinon is a girl who is terrified of guns in the real world because she killed a man with one when she was very little.  In GGO however, she’s one of the top shooters.  Her reason for playing GGO and her ultimate goal is to become strong enough in GGO to face guns in the real world, and in order to do that she’s determined to win the Ballet of Bullets. 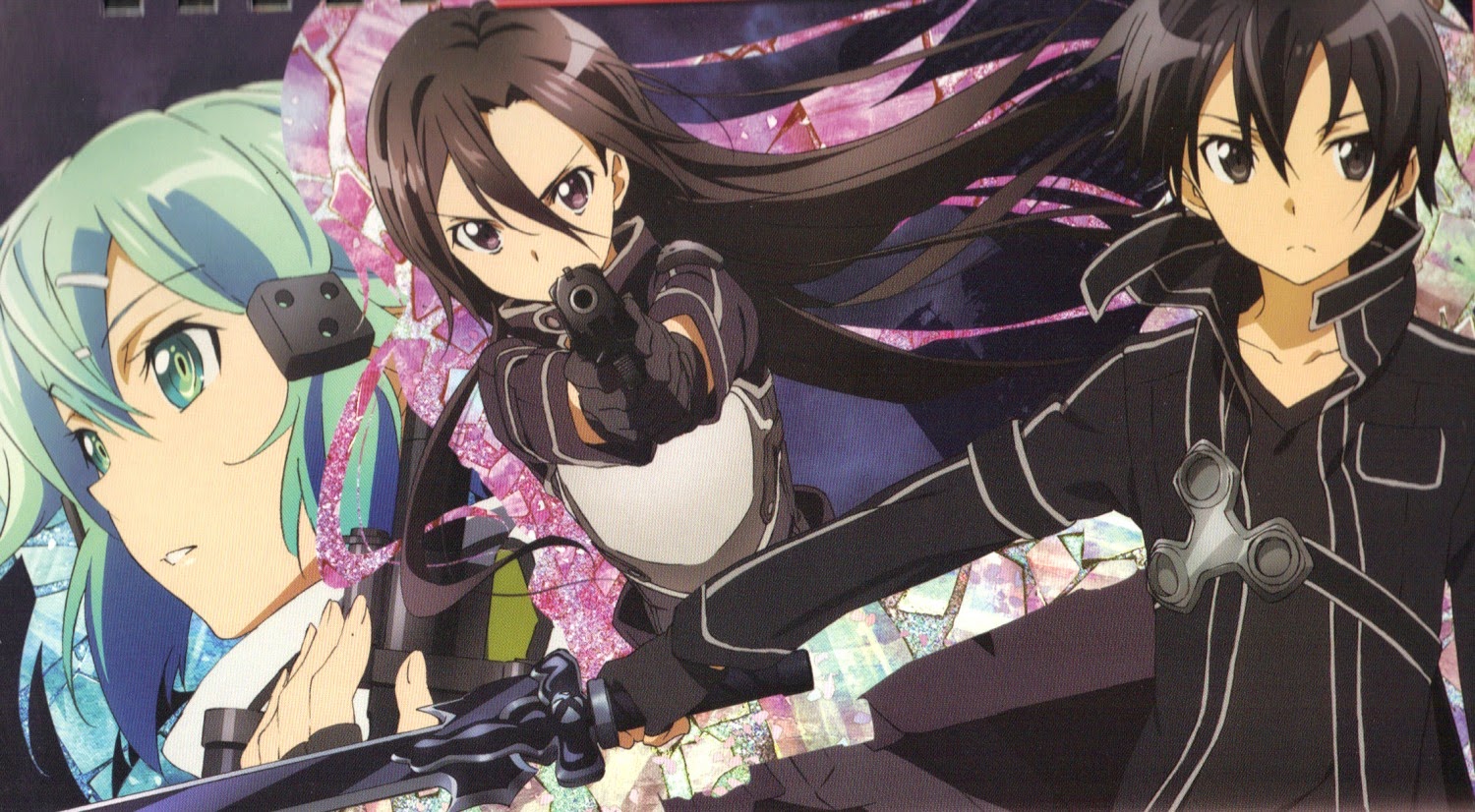 Also at the start of the series, a mysterious GGO player begins shooting people in GGO and they die at the same time in the real world.    Investigators in the real world tap Kirito to play GGO and see if he can figure out what’s happening.   Kirito agrees, but since the bad guy only kills top players, Kirito needs to be a top player, basically needs to qualify for a place in the Ballet of Bullets.  When Kirito logs in to GGO, his avatar isn't big and muscled and burly like nearly every other guy’s avatar in GGO.  It’s more in line with his Aincrad and Elfhame avatars, being smaller and more delicate and has long hair.  So everyone, Sinon included, assumes he’s a girl.  He asks Sinon for help getting started in GGO, and because she thinks he’s a girl, she helps him out.  She helps him pick a gun, and he does use a handgun, but predominately Kirito uses a laser sword.  Yes, only Kirito would bring a sword to a gunfight.  Because his reflexes are so damn fast though, it actually works. 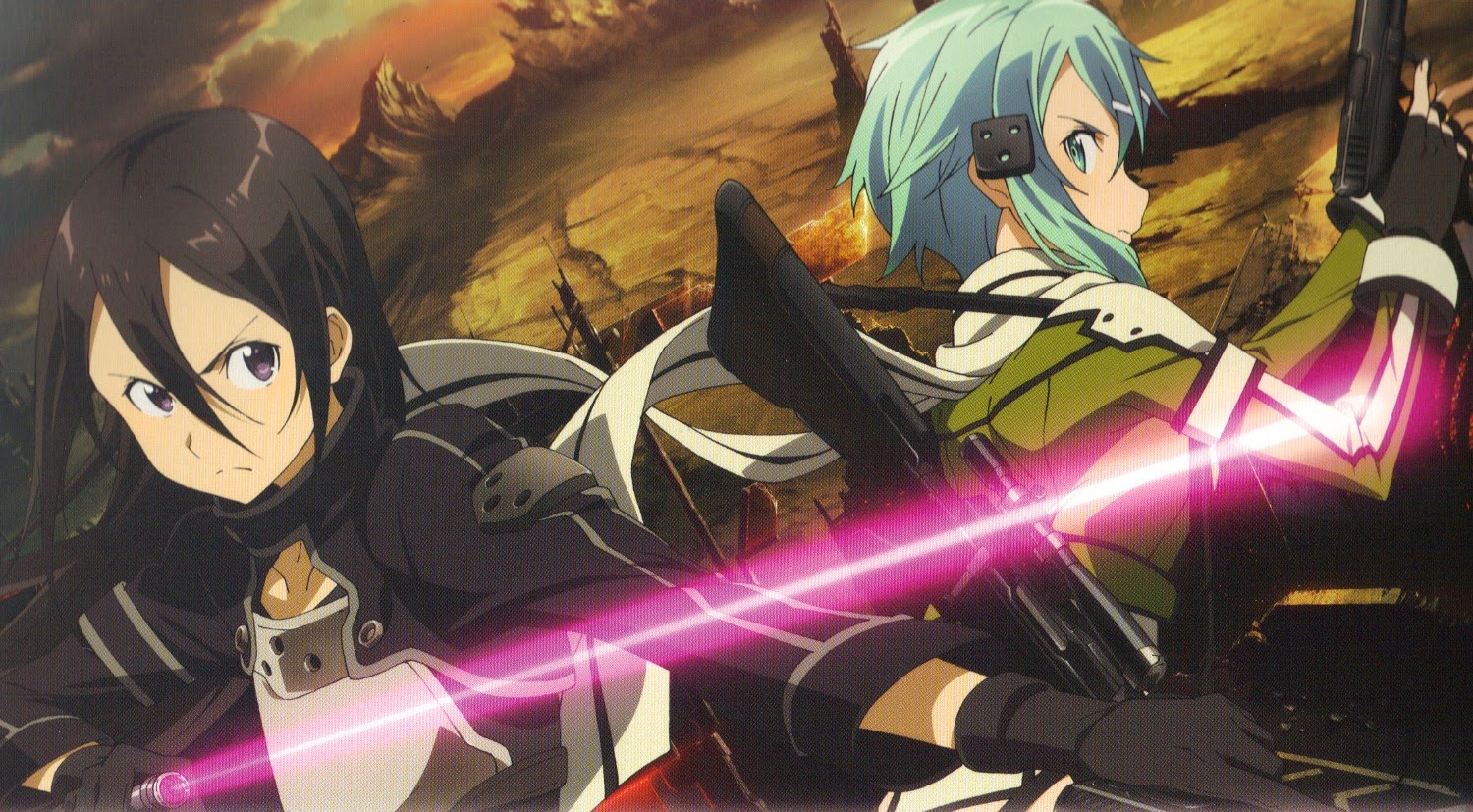 Sinon and Kirito fight each other in the qualifying rounds, reach an understanding, and both make it into the Ballet of Bullets.  During the qualifiers also, Kirito realizes that the GGO killer is a former member of Laughing Coffin, a guild from Aincrad that went around actually killing people.  Once the Ballet starts, Kirito and Sinon end up teaming up to figure out who the killer is, to fight him and to keep each other safe.  During the tournament, Kirito figures out that the way the GGO killer is killing people in the real world is that he has a real world accomplice.  This accomplice in the real world kills the person with a drug at the same time he is shot in GGO.  The GGO killer has been trying to kill Sinon, so his real world helper is probably at Sinon’s house, which is really creepy since Sinon lives alone. 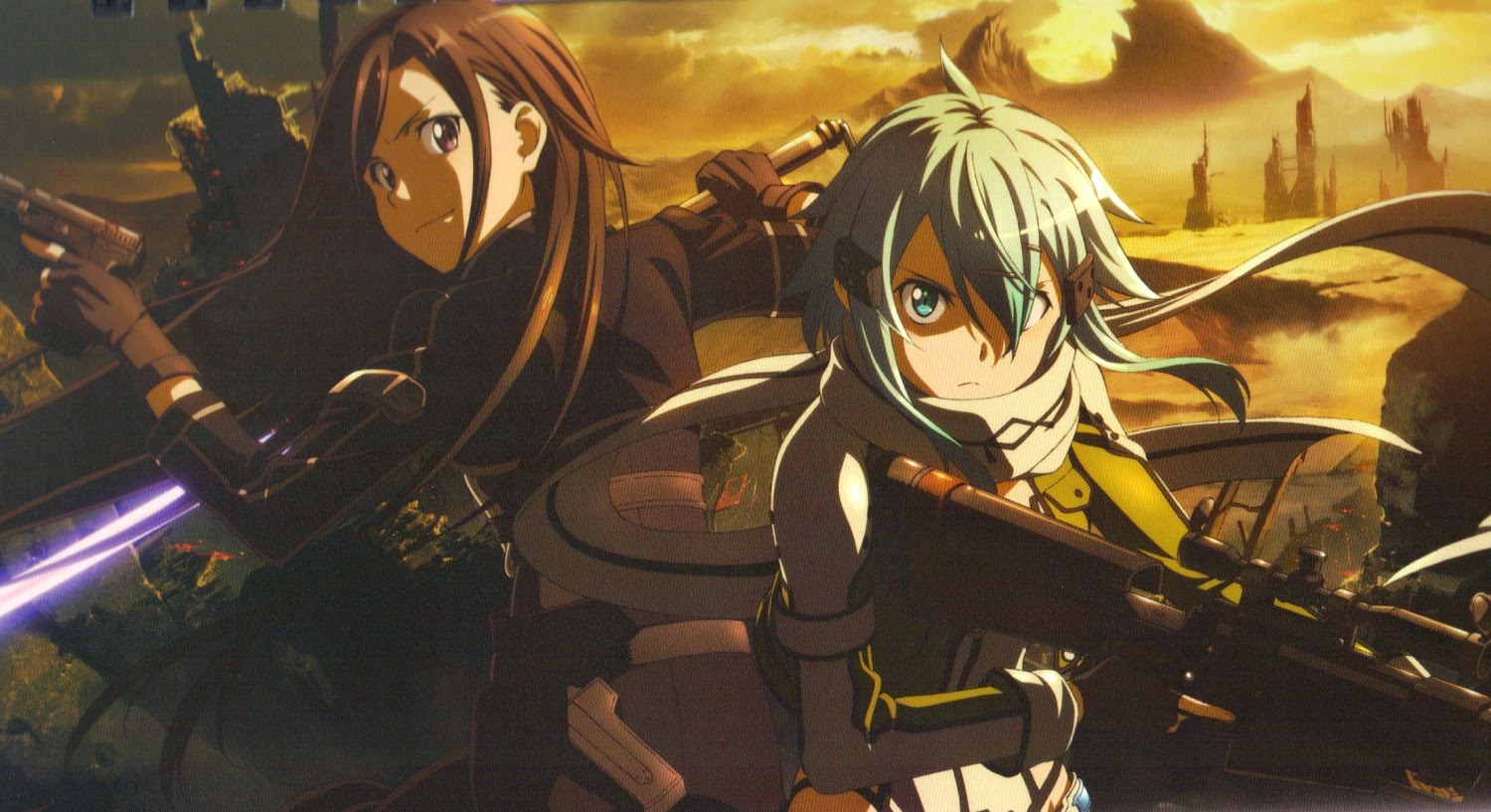 In the end Kirito and Sinon beat the GGO killer and are the last two shooters left alive in the Ballet of Bullets.  Because the tournament won’t end unless only one of them is left alive, Sinon blows them both up and they end up both winning.  Back in the real world, Sinon’s friend who started her playing GGO turns out to be the killer’s accomplice and attacks Sinon.  Kirito shows up and helps and everything works out okay.  Kirito and Asuna then set up a meeting with Sinon and the people whose lives she saved by killing the guy when she was little, and Sinon begins to be able to live with her past.

The GGO arc takes up the first half of the second season of SAO.  I enjoyed it almost as much as I enjoyed the first season of SAO, although the only original SAO player that gets much screen time is Kirito.  The rest of the gang watch the Ballet of Bullets from a bar in Elfhame Online, and have a marginal presence.  They figure much more in the second half of the season, which I'll talk about in a later post.