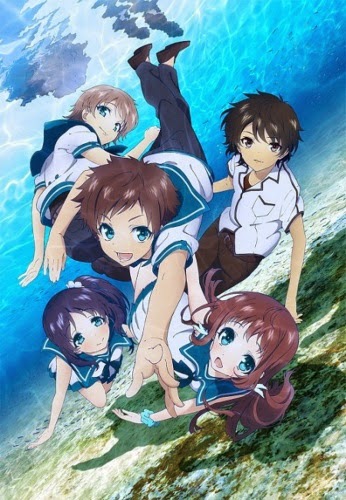 
This series is set in a universe where there are people who live underwater in the ocean.  They can do that because of substance called “Ena” that they are born with.  Ena coats the surface of their bodies, making them somewhat sparkly and allowing them to breathe underwater.  It also does cool things like absorb the moisture from their clothes when they come onto land, so that they aren’t wearing wet clothes all the time.  However, it needs water periodically, so they cannot stay up in the air indefinitely without re-wetting their ena.  Other than needing to get wet every so often the sea folk can live fine on land also, and the sea and land peoples live side by side, the land people making their livings from fishing the ocean. 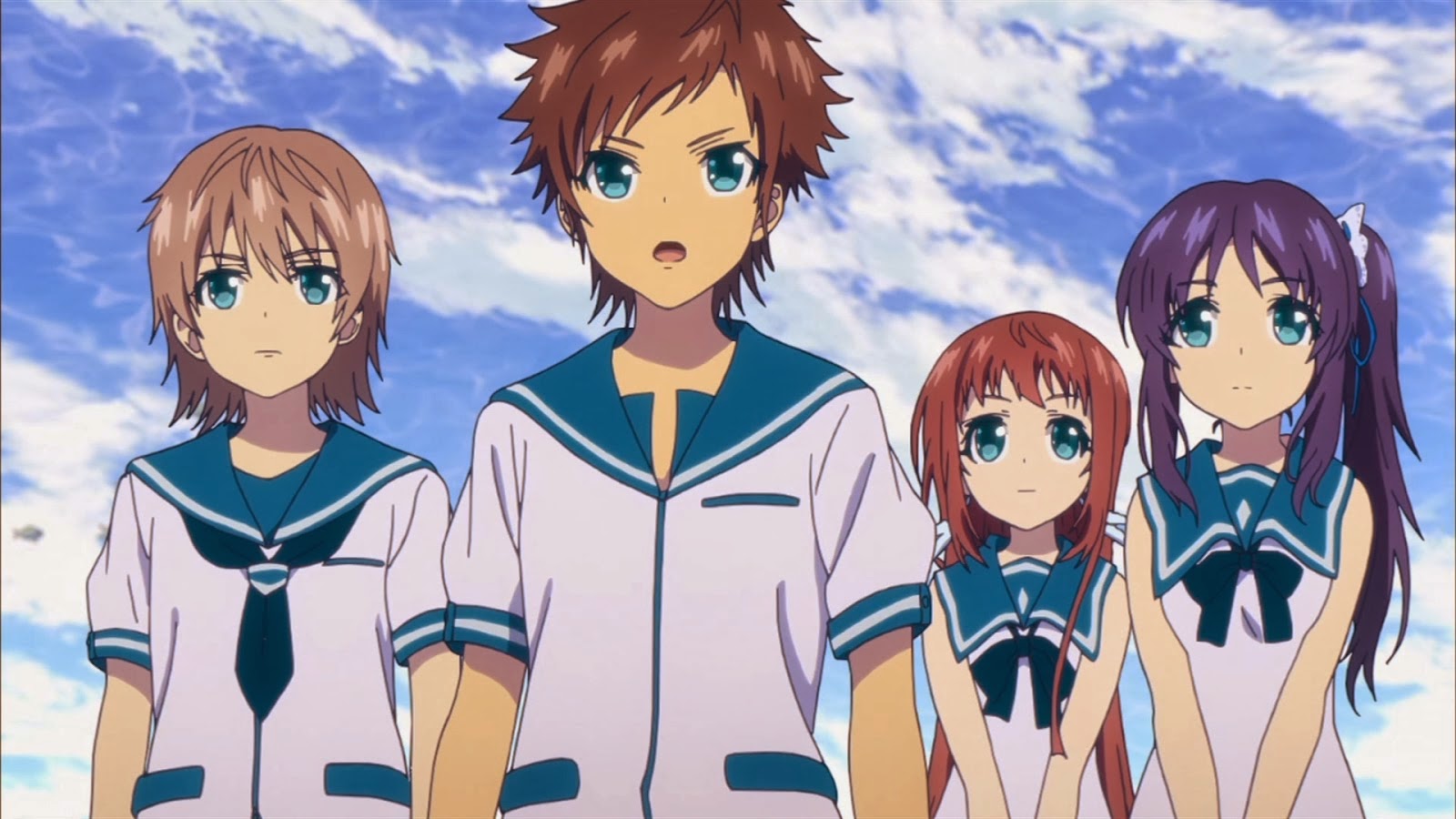 The story follows five kids, a foursome of sea kids who have been together since grade school, plus a land kid.  The sea kids are Hikari, Kaname, Chisaki and Manaka and the land kid is Tsumugu, who is a new friend they make when they come to middle school on land.  The story is a fruit-basket-turnover of crushes and loves between these five.  Along the way Manaka loves Hikari and Tsumugu. Hikari loves Manaka throughout. Kaname loves Chisaki, Chisaki love Hikari and then Tsumugu, Tsumugu loves Chisaki.  On top of the angst going on between these five, two grade school kids Miuna and Sayu have crushes on Hikari and Kaname, respectively.   And things get even more twisted because of the way the major plot line proceeds.

Hikari’s older sister, Akari, loves a land man named Itaru.  This is forbidden by the sea people because a child born between a land and sea person has no ena and cannot survive in the ocean.  Thus to love a land person causes one to be exiled from the sea.  But Akari follows her heart, like a lot of sea people before her, and leaves the sea for Itaru.  Miuna is Itaru’s daughter, and his first wife, now dead, was also a sea person.
The sea god gets angry at all the sea people that are being lost and decrees that all the sea people must get ready to hibernate in their city under the sea, for an untold number of years.  Hikari-tachi don’t want to hibernate and the five kids work with the land people to re-instate an old ceremony called Ofunehiki in order to attempt to appease the sea god.    The old ceremony offers up to the sea god a wooden replica of a woman originally sacrificed to the sea god. 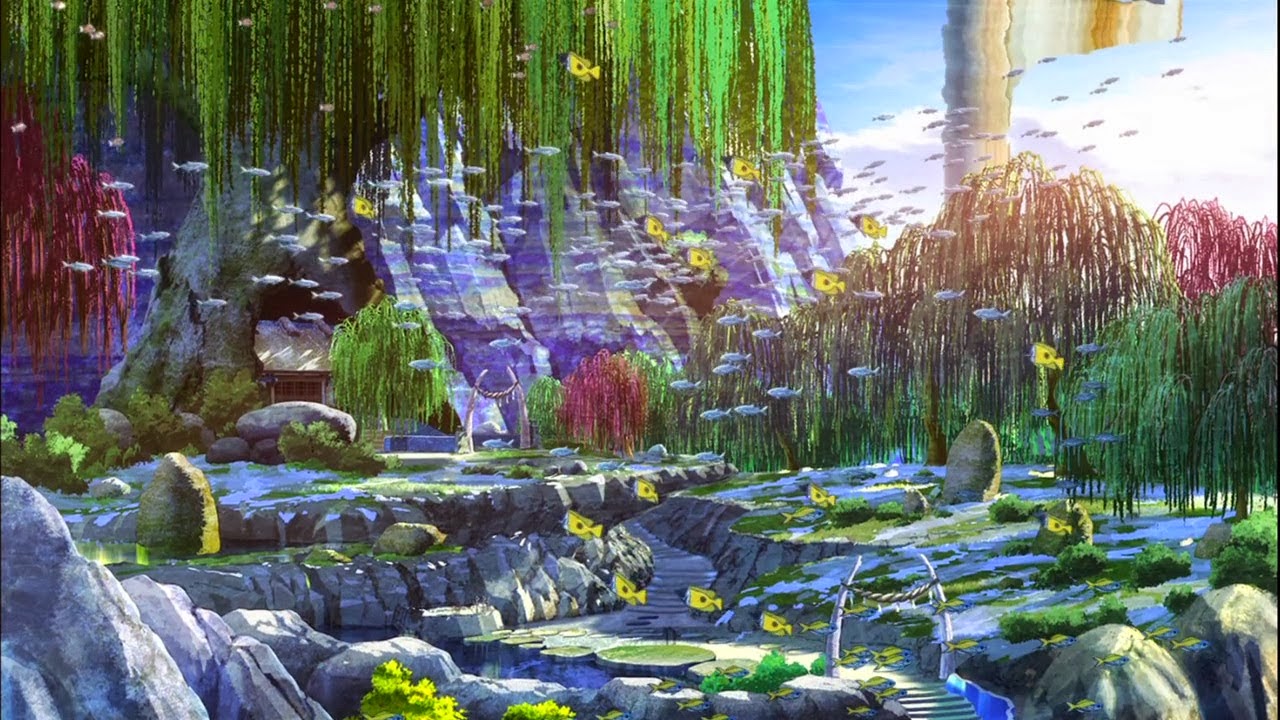 On the eve of the beginning of the sea people hibernating, the sea kids and land people hold the Ofunehiki.  Akari takes the place of the wooden doll to aid in appeasing the sea god, but the sea god awakens and disrupts the ceremony.  He takes Akari, and then when Hikari rescues her, takes Manaka in place of the wooden woman, and all the sea people enter hibernation except Chisaki, who saved Tsumugu from drowning and was left on the boat after it was all over. Five years pass.  The sea is ice covered, the climate is cold and snow is everywhere.  Chisaki and Tsumugu are following their individual careers, Chisaki living with Tsumugu and his grandfather.  Miuna and Sayu are now middle school age.   At this point, Hikari and Kaname wake up from hibernation and haven’t aged at all.  This means Chisaki and Tsumugu are five years older, and Miuna and Sayu are now Hikari and Kaname’s age.  Miuna and Sayu now go to school with Hikaru and Kaname and still have the crushes on them.  One night Miuna falls into the sea and discovers she has ena after all and can live in the ocean.  Tsumugu during this time discovers that he also has ena, as his grandfather, like Miuna's mother, was a sea person.  With Miuna's help, Hikari and Kaname find Manaka and have to return her to the surface to save her because she loses her ena. 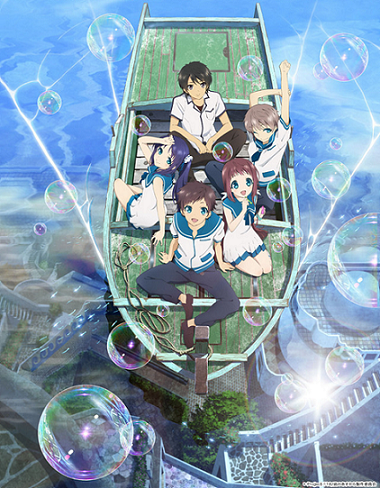 They discover that when the sea god took Manaka he also took from her her emotions and ability to love.  In an attempt to recover those things for Manaka,  Hikari-tachi hold the Ofunehiki again with the help of the land people.  It looks at first as though it will end like the first Ofunehiki with Miuna replacing Manaka as the sacrifice.  But in the end the sea god learns something from the land people, and everyone lives.  The sea people wake up, the seas begin to warm up, and all the children of mixed parentage gain ena and the ability to live on both land and in the sea.
This series is visually gorgeous, all bright colors and pretty animation style.  In addition, the music is good and the plot is definitely unique.  Even though it was often pretty emotional, I enjoyed watching it and recommend it.
Posted by dai-ET at 4:38 PM