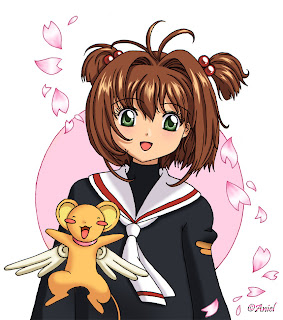 Cardcaptor Sakura (CCS) is another series I watched very early in my anime-watching career, and I still sometimes get the urge to go back and watch it again.  Of course, downloaded files when I watched this series were tiny little things you almost had to squint to see.  Sometimes I watch parts of this series just to fully appreciate how far video graphics have come. 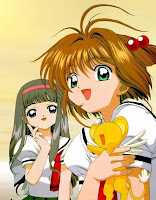 CCS follows the exploits of a young, grade-school girl named Sakura and her friends.  Sakura is living a normal life until she comes across a box of magic cards, the Clow Cards, which she opens.  The cards flee, scattering to the four winds, and the quest of the entire 70-episode series is essentially Sakura’s battles to recapture the magic cards.

Sakura’s best friend is Tomoyo, who happens to sew and likes to make costumes for Sakura and then film her wearing them during her battles.  Other people in her life when the series starts include her older brother, Toya, and Toya’s best friend, Yuki.  Sakura has a huge crush on Yuki. 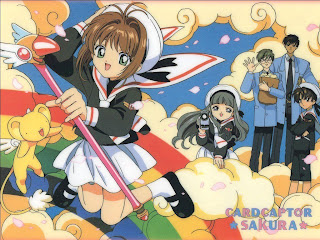 The series is basically fun to watch.  Sakura is helped in her quest by Tomoyo and by a small magic plushie named Kero (short for Cereberus).  Kero is the guardian of the Clow cards ad the plushie is one of his forms.  Along the way Sakura gains friends and enemies and begins to grow up.

The cards become increasingly difficult to find and catch as the series progresses, forcing Sakura to gain strength and grow.  Along the way a boy her age arrives from China.  This is Shaoran, a relative of the Card’s creator, Clow.  Shaoran is originally Sakura’s enemy as he wants to capture the cards himself.  He gains respect for Sakura though and becomes her friend and ally, eventually falling in love with her. 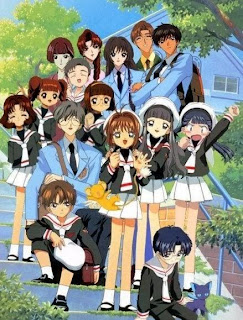 When Sakura captures all the cards, the card’s second guardian, Yue, shows up in order to determine if Sakura deserves to be able to own them.  Yue and Kero were originally Clow’s companions and Yue loved Clow, so he makes the test hard for Sakura.  Yue does determine that she deserves the cards though and things are fine until the appearance from England of the mysterious Eriol.  Eriol secretly causes Sakura to be unable to use the Clow cards and she finds she must gain new powers and transform the cards to Sakura cards.   Yue is particularly unhelpful in this, but you discover that he needs magic to survive and Sakura doesn‘t  have enough magical energy to sustain him.  Yue normally exists in the form of Toya’s friend Yuki most of the time.  In order to continue the existence of both his forms, Yuki and Yue, he leeches mega-energy from Toya, who loves him and gives it willingly. 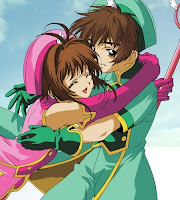 In the end of course Sakura converts the cards, gets over her crush on Yuki and discovers that she returns Shaoran’s love.

Despite all the struggles along the way, this series is so basically light and happy and fun that I’m often amazed that it was developed by the same group (CLAMP) who developed the ultra-tragic X, and Tokyo Babylon.  Still both those series are very much worth watching also. 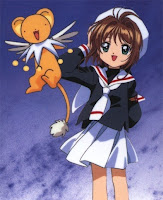 The plot of CCS is definitely typically CLAMP twisty.  The characters are gorgeous, the music is good and overall it’s just fun to watch.  It’s a happily-ever-after series so nobody dies and things all work out in the end.  Besides being fun to watch, the plot is quite twisty enough to keep you guessing and watching.  I liked it.
Posted by dai-ET at 8:21 AM