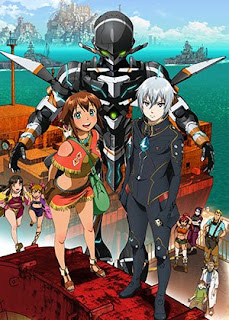 Suisei no Gargantia starts out as a space opera, in the middle of a massive battle between humans and their arch-enemies, the Hideauze.   Ledo is a young lieutenant in the human space force.  He has been battling the Hideauze his entire life, and war and fighting is all he knows.

As the series begins, Ledo in his mecha, Chamber, is thrown out of a battle and across space.  He and Chamber end up on a water world where humans are living on cobbled together fleets of ships.  They live by fishing and trapping rain water for drinking, and they salvage old tech from the ocean floor to trade with other fleets.  Chamber, with Ledo inside, is “salvaged” from the ocean, and Ledo finds himself living with humans who are primitive by his standards on a massive fleet, appropriately called Gargantia.

The initial interactions between Ledo and the members of the fleet are not smooth.  A young girl named Amy takes Ledo under her wing, and begins to try to teach him to be more human.  Ledo has only two modes that he knows how to operate in, battle and stand-by.  He doesn’t understand work and play.  He believes that only people capable of fighting deserve to survive, so struggles with the existence of Amy’s crippled brother.  When the fleet is approached by pirates, the fleet asks for Ledo’s help.  He kills all the pirates since that’s what he knows, while they expected him to only help them drive the pirates off.

Just as Amy is succeeding and Ledo is beginning to figure out how humans live on this world, he discovers that primitive Hideauze live in the world’s oceans, and he goes into extermination mode.  Unfortunately, the primitive Hideauze are held in almost religious esteem by most of the fleet members and the interactions between them and Ledo become even worse. 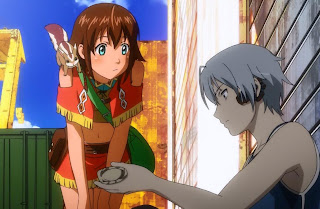 Along the way, the head of the Gargantia fleet dies and his young daughter takes over as fleet commander.  At that time, the fleets splits up and a salvage expert named Pinion convinces Ledo to go with them .  This splinter group goes to wipe out a major Hideauze nest in order to salvage the tech under them.  This suits Ledo fine since he would like to wipe out all Hideauze on the world.  As Ledo exterminates the Hideauze in the nest, including eggs and young, he comes across some shattering evidence.  The Hideauze are evolved from humans.  The water world they are on is the original human world.  It’s sun went nova and before that happened two factions of humans existed, one who believed humans needed to evolve into beings that could exist in space or in water, and the other faction who believed that humans should stay humans.  Even before humans left earth, and before they finished evolving, the two factions began battling each other, and the massive, never-ending space battles are a continuation of the battles between evolving humans and non-evolving  humans. 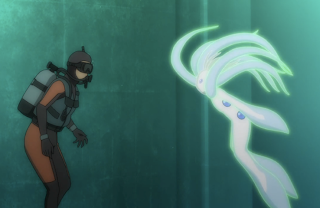 Ledo is devastated to know that all his life he’s been killing beings evolved from humans and he stops killing them.  At this juncture, Ledo's former commander from space shows up.  He has set himself and his mecha up as God, ruling the people in his fleet with an iron hand and getting rid of those who aren’t useful.  Ledo originally joins his former commander, but when the commander sets his sights on conquering Gargantia and making her people slaves, Ledo goes to battle for Amy and the people of fleet Gargantia. 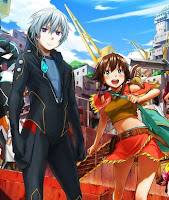 This series is fairly predictable at times, although I didn’t expect to find that the Hideauze started as humans.   The characters are interesting, with Ledo’s mecha Chamber actually seeming occasionally more human than Ledo does early on in the series.  The settings and characters  are colorful and bright.  And the mecha aspect is kept to a reasonable level instead of being the focus, like in so many mecha series.   Overall it’s a good series to watch.