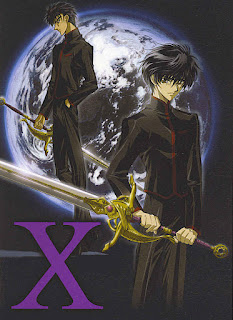 Today I decided to post about another old series, X, the 2001 TV anime series, not the 1999 movie, which was  . . . not good.    X is done by CLAMP so as you can imagine, the plot is twisty and the characters are in for a lot of tragedy.  It’s sometimes hard to remember that CLAMP did Card Captor Sakura as well as X and Tokyo Babylon.

X is about a young man named Kamui.  Kamui has been gone for a period of time but is returning to the area where he grew up and to the brother and sister who were his best friends as children, Fuuma and Kotori.    Kamui also happens to be destined to either save or destroy the world.

It seems that prophecy has said that Kamui will either lead the group of seven known as the Dragons of Earth, or the group of seven known as the Dragons of Heaven.  Depending on his choice, he will either destroy the present world in order to rebuild it, or save the present world as it is.  The early story line introduces the seven Dragons from each group and details Kamui’s battle to stay clear of all of them and not make a choice.   Unfortunately he cannot not decide and eventually he chooses the Dragons of Earth, to maintain the status quo and save the existing earth.

The bad news is that Kamui’s best friend Fuuma is also his Gemini, his twin (although they look nothing alike).  Fuuma’s destiny is to become the leader of the group Kamui does not choose, and he does so with a vengeance.  He becomes evil personified and kills his own beloved little sister in front of Kamui and then the battles begin between the two groups.  From this point on in the story, Kamui is a wimp and he is beaten at every turn.  His group is decimated and fighting uphill odds because they cannot use the destructive tactics Fuuma’s group uses.

In the end, Kamui gives his life (yes, he dies) to save the existing world and return Fuuma to what he was.  Fuuma returns to being a nice guy, but retains all his memories, so I imagine he has some series issues to work through having killed both his sister and his best friend. 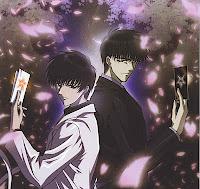 Besides this rather straight-forward plot line, CLAMP also adds in a bunch of side-stories about the other characters, including the backstory of one of Kamui’s group, Subaru.  Besides being one of Kamui’s Dragons of Earth, Subaru is the main character from the series Tokyo Babylon.  He is an onmyouji who had a twin sister, Hokuto.  Subaru and Hokuto’s best friend, Seishirou, kills Hokuto in that story, (twisty plot there also) and in this story Seishirou is on the side of the Dragons of Heaven.  So Subaru battles against a man he both hates and loves, but must defeat.  He does defeat Seishirou in X but at a price.

There are several love stories in X between people on opposite sides on the conflict as well as between people on the same side.  I think only one of them ends happily with both characters surviving the series.

X is TRAGIC, with many of the characters from both groups being killed off, and everyone on both sides being touched by tragedy.  It's a story about betrayal, of which there's plenty, and trust, of which there's some.  The series is also pretty, as you would expect from CLAMP.  The music is wonderful and the plot is interesting, if maybe occasionally more complex than necessary.  I liked the series overall but I wasn't thrilled with how it ended, and I spent a couple boxes of Kleenex on it.  So expect tragedy if you decide to watch it.
Posted by dai-ET at 12:22 PM